China's Nukes: What Happens in a Showdown with America? 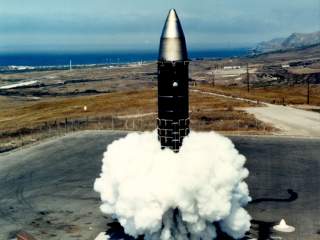 As the Islamic State dominates national security headlines, tensions between Washington and Beijing on a whole host of issues—think the East and South China Seas, Taiwan, China’s rising conventional military power with growing overseas power projection capabilities etc.—only get the occasional attention they truly deserve. Getting even less attention these days: China’s multi-decade quest to modernize its nuclear weapons arsenal. Beijing is developing nuclear armed missiles that have longer ranges (and yes, they can hit the United States), tipped with multiple warheads that are now being deployed across multiple domains (air, land and now in the ocean).

While recent attention on China’s nuclear arsenal—specifically that Beijing is testing a railcar based mobile intercontinental ballistic missile (ICBM) with a range of 7,500 miles or more—was certainly welcomed, America’s academic community has been keeping a close eye on China’s growing nuclear weapons program for many years. Case in point, a recent article in the renowned academic journal International Security sheds new light on Beijing’s nukes. So what makes this article special? The author’s detailed analysis on an important subtopic: if Beijing will eventually abandon its long-standing nuclear strategy of assured retaliation for what MIT-based authors Fiona Cunningham and M. Taylor Fravel call a “first-use posture” that “will be a critical factor in future U.S.-China strategic stability.”

As I like to do of late, here are the major themes of this recent article, titled Assuring Assured Retaliation: China's Nuclear Posture and U.S.-China Strategic Stability.

“In general, China has sought to maintain the smallest possible force capable of surviving a first strike and being able to conduct a retaliatory strike that would inflict unacceptable damage on an adversary, at the time and place of China's choosing. Rather than expend all of its nuclear forces in a single, massive retaliatory strike, China has structured its nuclear forces to conduct multiple waves of large- or small-scale retaliatory strikes. As result, key principles in force development since 1980 have been “close defense” (yanmi fanghu) and “key-point counterstrikes” (zhongdian fanji). Close defense refers to ensuring the survivability of China's forces, which first emphasized concealment and then mobility. Key-point counterstrikes refer to the means and methods of retaliation and how to inflict unacceptable damage on an adversary. Historically, Chinese planning has targeted population and industrial centers as well as soft military targets, such as military bases.”

“How much is enough for China? The answer to this question has always been relative to a potential adversary's capabilities, namely, those of the United States and the Soviet Union/Russia. Historically, China's leaders have lacked confidence in their ability to assure retaliation. At times, either China has lacked enough weapons or the weapons that it possessed were not sufficiently survivable. By the mid-1990s, for example, China only possessed approximately twenty DF-5 ICBMs capable of reaching the continental United States. These missiles were liquid fueled, which increased the time required to prepare them for launch and reduced their reliability and survivability. The missiles were vulnerable to an enemy strike while they were being fueled, as were the fuel storage areas. China was also concerned about the reliability of its missile technology and the reconnaissance capabilities of its opponents. As a result, China sought to modernize its forces to increase survivability and penetrability. This included developing two road-mobile, solid-fueled missile systems, the DF-31 and DF-31A, as well as a submarine-launched variant, the JL-2, to be used aboard the new Type-094 class of ballistic missile submarines (SSBNs). China's first-generation Type-092-class SSBN armed with the JL-1 missile encountered so many technological challenges that it never conducted a single deterrent patrol.”

“China's strategic community views the U.S. development and deployment of ballistic missile defense capabilities as the most serious threat to China's nuclear deterrent. Chinese analysts believe that the deployment of early warning systems and interceptors gives the United States a rudimentary missile defense capability against Chinese nuclear missiles. China's strategic community also expects the system to become more integrated and effective in the future. For many, the Obama administration has only slightly altered the Bush administration's missile defense plan, as U.S. missile defense has bipartisan support and is now a permanent feature of the strategic landscape.”

“Chinese concerns about U.S. capabilities are likely to further underscore the ambiguity that China has allowed to persist regarding its no-first-use policy. In the mid-2000s, a debate over whether to maintain the policy occurred within China amid concerns about a future conflict over Taiwan's unification involving the United States. The debate was prompted in large part by the prospect of conventional strikes against Chinese nuclear capabilities and nonnuclear strategic targets, such as the Three Gorges Dam.”

“China is unlikely to alter its nuclear strategy. That is, the pursuit of a lean and effective force to conduct a retaliatory campaign to deter a first strike against China remains the basis of China's nuclear strategy. Even though China is expanding the size and sophistication of its arsenal, sources and individuals consulted for this article indicate, in essence, that China will seek to achieve the goals contained in its current strategy and not pursue new ones, such as the ability to conduct a first strike on an adversary's nuclear weapons. As the Science of Military Strategy describes, “China's nuclear force employment follows the principle of ‘striking after the enemy has struck’ (houfa zhiren); a nuclear counterattack is the only type (yangshi) of combat employment for Chinese nuclear forces. The relative superiority or inferiority of China's nuclear counterattack capability directly influences the effectiveness of its nuclear deterrence. Therefore, the fundamental goals of the development of the Second Artillery are to effectively increase the number of missiles to ensure that a sufficient number are available for a nuclear counterattack, and to increase the effectiveness of an actual nuclear counterattack.” The main challenge from China's perspective is how best to achieve a secure second-strike capability in light of the continued development of missiles defenses and various long-range conventional strike capabilities.”

“China's continued commitment to a nuclear strategy of assured retaliation with a small but robust nuclear force structure avoids the wastefulness of Cold War arms racing. To deter U.S. conventional attacks on its nuclear forces, however, China relies on limited ambiguity over its no-first-use policy, which could make a future U.S.-Chinese crisis more dangerous. China appears willing to accept this risk because its assessments of crisis stability in the U.S.-China relationship are relatively optimistic…Even if Chinese analysts accurately assess the nuclear risks present in a U.S.-China contingency, their optimism is unwarranted because it is not shared by the United States and because China likely underestimates U.S. assessments of the stakes in a potential crisis.”

Clearly I am cherry picking some of the major highlights of a very scholarly and important forty-three-page academic article. Considering past works by Fravel when it comes to Chinese nuclear doctrine are now assigned reading at many of the top security studies programs around the world, Asia hands should consider the ideas in this paper very seriously. But don’t take my word for it: read the whole thing.