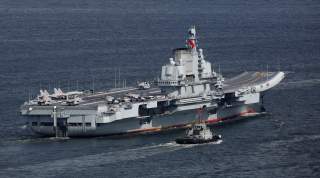 China’s only serving aircraft carrier, the Liaoning, has moved closer to full combat readiness after its naval pilots apparently completed their first nighttime take-offs and landings, joining a small group of fliers whose countries have this capability.

State broadcaster China Central Television has aired footage that seems to show J-15 fighters taking off and landing on the carrier, which China purchased from the Ukraine and commissioned in 2012.

Beijing-based military analyst Li Jie told the People’s Daily that “just a few navies” have acquired the ability to conduct nighttime operations, which are considered more technically challenging. The United States, Russia, Britain and France are the other countries able to do so.

The difficulty with nighttime flying is that most of the carrier’s lights are dimmed after sunset so the vessel can avoid detection, leaving a pilot with few guiding or alignment references, other than his own avionics and some scattered dots of  illumination on the flight deck. The only bright light often is the glowing afterburners of a fighter jet.

Li said a pilot had to be psychologically strong and calm to maneuver and align his jet for landing in almost zero visibility.

The CCTV report suggests that in grooming an elite team of fighter pilots, the People’s Liberation Army may be edging closer to having a carrier strike force that can launch offensives at any time, though Chinese naval aviators, flight controllers and ground crew still need to hone their skills, particularly with the ability to operate in inclement weather conditions at night.

The nighttime training was likely held in the East China Sea last week as part of the Liaoning’s months-long cruise and wargames that also extended into the South China Sea. Other exercises included mock sea-air coordinated patrols with carrier-borne assault helicopters.

The Liaoning is now back to its home port at Dalian Shipyard in the northeastern province of the same name, moored alongside its lookalike sister ship, now only referred to as Carrier Type 001A.