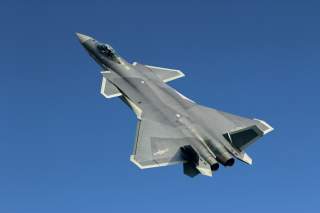 In the ongoing military scorecard between the United States and China over who has the most “stuff” – be it troops, tanks, guns, ships or airframes – the human element is sometimes overlooked. By human element we mean the operators behind the hardware making the decisions on what, how and when to shoot and how to employ tactics and counter-tactics based on the environment and the adversary. Neglecting the human element of the U.S.-China military competition would be a major omission, however, as it remains a key variable in assessing a country’s overall military power and capability.

The determinants of operator competency are shaped to a large extent by the military and political culture under which troops train. During the Cold War, U.S. planners believed quantitative advantages in the Soviet air force were offset by superior USAF training and tactics – a product of a U.S. training system that breeds pilot autonomy and objective assessments of error. In many respects, this was a correct assessment at the time. In comparing U.S. and Soviet air forces,  for example, Col. Mike Press, writing in Air University Review in the mid-80’s, penned an articulate and persuasive case for U.S. fighter pilot training superiority based on the USAF training program, but warned that “human advantage is very fragile and even here the Soviets show signs of progress.”

Now three decades later, Press’s words remain more relevant than ever when it comes to assessing the air forces of China and the United States. The People’s Liberation Army Air Force (PLAAF) has made tremendous strides in recent years, fielding an impressive array of third-, fourth- and even fifth-generation stealth aircraft. By numbers alone, the PLAAF remains one of the largest air forces in the world. The PLAAF also desires to build what it calls a “Strategic Air Force” to play a larger role in China’s push to project power and influence in areas farther from the Chinese mainland. Already, the PLAAF has begun sending bombers to patrol the disputed Spratly Islands in the South China Sea – areas in which it would have been unheard of for the PLAAF to operate just five or 10 years ago.

Until recently, little was known, however, about how Chinese air force pilots train. In our report on PLAAF fighter pilot training, we find that the PLAAF has embarked on major reform of its pilot training program in order to remedy deep-seated flaws in fighter pilot competency. We know this because of the availability of an increasingly large number of Chinese language open sources published by the People’s Liberation Army and other authoritative military professional military education institutions. For our report, we examined articles on PLAAF fighter pilot training at the operational unit over a five-year time frame in the PLAAF’s official newspaper, Kongjun Bao (Air Force News). What we found was a PLAAF that is acutely aware of its shortcomings in pilot combat skills and that is seeking to train pilots capable of “fighting and winning” battles against near peer military adversaries, like the United States.

The core of the reform is an effort to train pilots to fight under what the PLA refers to as “actual-combat conditions.” The emphasis on “actual combat conditions” is manifested in training scenarios meant to mimic or simulate real-world battle conditions by adopting within daily training routines elements of nighttime battle training, complex electromagnetic environment, special geographical environments, and combined arms training. The PLAAF’s lack of recent wartime experience magnifies the importance of constructing a training regime grounded in scenarios that approximate to the greatest extent possible technologically sophisticated battlefield conditions.

When not performing daily training during the spring and fall seasons (what the PLAAF refers to as training in “subjects” and “topics”), pilots are honing their skills in increasingly competitive and multi-dimensional skills competitions under “opposition-force exercises” during the summer. These are multi-day, multi-branch exercises that involve a simulated opposition force and combined-arms elements either within the PLAAF itself (aviation, surface-to-air missiles  (SAMs), anti-aircraft artillery (AAA) and radar) or among different services within the Chinese military (army, navy, and rocket forces). Exercises seek to integrate and apply the routine training subjects and skills practiced by aviators during the year into a competitive environment, in which pilots are graded on performance and tactical skills.

According to Kongjun Bao reporting, most exercises take the form of either “confrontational air battle assessments” or “system-of-systems confrontational drills.” The former only involves fighter aircraft competitions, while the later involves multiple branches of the PLAAF to include SAMs, radar, and AAA. Both evaluate pilots’ ability to perform free-air combat, a new emphasis within the PLAAF meant to test pilot combat skills and tactics upon the removal of certain limits, such as decreasing the altitude gap between aircraft, as well as less direct involvement from the control tower or command post. Such autonomy represents a significant departure from past practice, which emphasized strict reliance on scripted scenarios and guidance from the ground control on most tactical moves against a simulated enemy.

Finally, real-time video feeds are now employed during daily training and during exercises and drills as a tool to evaluate PLAAF pilot performance. Flight-data recordings were previously unavailable to most Chinese aviators, but now offer an objective means of analysis for flight leads and instructors in assessing pilots' performance, no matter their experience or skill level. Kongjun Bao reporting frequently references video playback that allows flight instructors to “rectify mistakes” of experienced pilots, such as deviations from flight paths or poor tactics in combat. Such open criticism underscores a potential shift from current practice, in which flight leads and instructors might refrain from criticizing senior pilots.

While the PLAAF is endeavoring to make training more realistic and dynamic, the report finds that antiquated institutions and, to an extent, thinking continue to act as a drag against progress. The PLAAF continues to train around an annual training cycle, which features five partially overlapping segments during the course of a year: new year flight training; training in “subjects” and “topics;” peak drills and exercises; a second round of training in “subjects” and “topics;” and year-end evaluations. The existence of a PLAAF annual training cycle with peaks and valleys stands in contrast to the USAF model, which maintains a comparatively higher state of readiness and intensity of training year-round.

Several factors explain the existence of an annual training cycle for PLAAF, the most important of which are institutional. PLAAF training must accommodate the annual enlistment cycle of PLAAF conscripts and recruits, most of whom arrive during the fall and serve for two years before they can leave the military or become non-commissioned officers. Conscripts comprise only a modest portion of aviation branch personnel, but the competence of these maintainers and ground-support personnel is critical and pulling off large, integrated combined-arms exercises prior to their full integration is virtually unthinkable. Thus, the peak exercise season in the summer can only be executed during small windows when the weather is optimal and the conscripts in support and logistic roles within the PLAAF have received sufficient training to undertake their duties.

The PLAAF lacks anything that even remotely parallels the USAF Weapons School, which accepts only the best pilots from tactical units, puts them through a highly-demanding six-month tactical training program, and returns them to their units to serve as weapons and tactics officers. Indeed, career paths for PLAAF pilots remain highly stove-piped, with officers serving either in training or tactical capacities – but almost never both. Even as the PLAAF seeks to emphasize “free air combat,” it is less clear that commanding officers are fully willing to cede either administrative or operational micromanagement of their units.

A Work in Progress for the PLAAF

The PLAAF is taking measures to address most of the issues outlined above. It has, for example, opened a new (if limited) training program for unit-level instructors. And, in an effort to highlight the emphasis placed on initiative and individual pilot skills, it has conducted an annual “golden helmet” competition since 2011, allowing selected pilots to test their craft against one another. Overall, however, the reform of Chinese pilot training remains very much a work in progress. With the emphasis on “free air combat” and “unscripted scenarios,” pilots are now expected to be more autonomous in their decision making and adapt to increasingly complex combat environments. It is one thing to incorporate changes into a training program. It is quite another to consistently execute the task and accept failure along the way.

Several Kongjun Bao articles noted shortfalls in pilot performance, including insufficient flight-lead skills and autonomy, lax discipline during daily training, poor tactics, and a lack of coordination with other PLAAF branches. One article noted that many flight leads lacked sufficient “tactical skills” and still relied on ground control for their maneuvers, which was “not conducive to enhancing the enthusiasm and initiative of airborne combatants.” Similarly, as one article stated, pilots showed an inability to adapt to in-flight changes to a flight path during an air-to-ground targeting mission, “failing to shape a new launch condition” and as a result “hitting the wrong target.” In one case, a flight leader was unable to cope with an evolving tactical situation, and returned control to the ground-based unit commander on contact with the “enemy.”