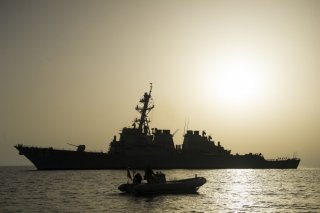 China’s takeover of the South China Sea is nearly complete and Beijing is now stepping up its sophisticated information warfare campaign in preparation for an expected unfavorable ruling from an international tribunal affecting its island claims.

The Permanent Court of Arbitration in The Hague is expected to rule within the next few weeks on an appeal from the Philippines challenging the legality of China’s claim to maritime sovereignty over most of the South China Sea under its ill-defined “Nine-Dash Line” over 90% of the sea.

The Philippines, in early 2013, brought its case to the court, asserting that the Chinese maritime zone is illegal because it violates the 2006 UN Convention on the Law of Sea that sets out exclusive economic zones and territorial waters.

China’s response was to refuse to take part, based on asserting Beijing’s questionable historical claims over the sea stretching back to the Ming dynasty that ended in 1624.

An indicator of the Chinese reaction to the court was on display in The Hague on Saturday. China’s ambassador to the Netherlands, Wu Ken, used the official Xinhua news agency to denounce the pending decision – even before it was announced.

“China will not accept an invalid arbitral award. Abuses of international law and a hegemonic mentality have no place in any [South China Sea] dispute,” Wu said. “Such an arbitration should not be recognized or supported in any manner.”

Wu went further and accused the United States of influencing the court to rule in Manila’s favor.

The Chinese propaganda themes on the sea dispute include the false narratives that all the islands are and were Chinese territory; that the court is an abuse of the legal process; and that the court lacks jurisdiction because China refused to take part in the arbitration.

The legal abuse claim is especially noteworthy since it has been a tool in China’s information warfare repertoire for decades. China has used legal warfare to achieve strategic objectives, along with psychological warfare and media warfare – dubbed China’s soft power “Three Warfares.”

The strategic goal of China in the South China Sea are to solidify control over the waters without firing a shot, in much the same way as Russia was able to do with its military annexation of Ukraine’s Crimea in March 2014. The People’s Liberation Army (PLA) refers to this as the use of “military soft power.”

Since China began in earnest to build up disputed islands and reefs in the strategic waterway several years ago, Beijing also has carried out an international propaganda and influence campaign designed to sway world public opinion that its actions are not aggressive or destabilizing.

Nations within the region, a strategic bridge between the Indian and Pacific Oceans and a major trading route, have turned to the United States for support in the sea dispute.

President Obama and his administration for the most part have done little to push back – both from a counter- information warfare standpoint as well as through shows of military support – against China’s gradual hegemony.

The administration at first seemed to ignore the Chinese buildup that is focused on a triangle of strategic bases starting in the Paracels, in the northern part of the sea where China’s claims clash with those of Vietnam, and two sets of islands in the southern Spratlys, located close to US defense treaty ally Philippines and claimed by Manila.

In recent months, after the PLA gradually began adding missiles and warplanes on some of the new islands, the US government response has suffered from a series of confusing and mixed signals sent to the Chinese.

American naval freedom of navigation operations have been relatively few – three since October – and surveillance flights have been sporadic as well, often resulting in unsafe Chinese aerial intercepts that resulted in no public protests, and little comment from the Pentagon.

The furthest any senior US official has gone in criticizing China are Defense Secretary Ash Carter comments in recent weeks that the United States is fine with China’s modernization but not its bad behavior in the South China Sea, behavior he and other senior officials have failed to clearly spell out.

Also indicative of the mixed signals were the recent comments by President Barack Obama in Hanoi when he failed to even mention China in telling an audience that big nations should not bully smaller ones. He later undercut his own remarks by asserting that closer US-Vietnam ties were not aimed at China.

Meanwhile, China’s state-run media has gone into full anti-American mode in recent days accusing America of building closer ties with Vietnam as part of a Cold War-style effort to “contain” China’s rise — as the White House and State Department seem to back even further down from criticizing China, claiming falsely that the US military pivot to Asia and bolstering alliances across the region had nothing to do with Chinese aggression and coercion.

Asked Tuesday about China warning that United States not to trigger a regional war, Secretary of State John Kerry told reporters, “first of all, this is not about China. Nothing that we did here or are doing here is focused on China.”

Kerry then claimed the Obama administration consistently urged China to respect the rule of law and engage diplomatically without taking unilateral steps, something China appears to be ignoring.

Will China Step Up Actions?:

Commenting on China’s state-run media asserting that the South China Sea dispute could escalate into a conflict, Kerry cautioned China not to “unilaterally move to engage in reclamation activities and militarization of islands and areas that are part of the claims that are in contest today.”

But in the next sentence the secretary asserted that the United States has no position on the Chinese hegemony. “China should note that. We’re not saying China is wrong in its claims; we’re simply saying, resolve it peacefully, resolve it through a rules-based structure,” he said.

With no clear indication from senior US leaders that China is wrong in its South China Sea claims, the message to Beijing is loud and clear: China has no worry from a weak US administration in taking over the sea.

In fact the perceived weakness could spur China to step up its South China Sea activities in anticipation that its free ride will end with the inauguration of a new US president in January.