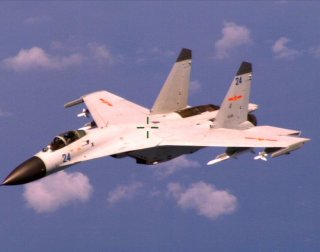 Recently when a Chinese fighter jet pilot harassed a P-8 U.S. reconnaissance plane in the skies over the South China Sea, he wasn’t just displaying China’s growing military might.  He was also taking dead aim at two of the most sacrosanct principles of the international global order – freedom of navigation and overflight.

According to the Pentagon, the Chinese pilot’s intimidation included a barrel roll over the P-8, a 90-degree pass across the P-8’s nose with weapons bared, and a fly along within 20 feet of the P-8’s wingtips.  That this is extremely dangerous is underscored by an eerily similar event in 2001.

In this “EP-3 Incident,” a U.S. Navy EP-3 reconnaissance plane flying about 70 miles from Hainan Island was struck by another “cowboying” Chinese fighter pilot and plunged more than 14,000 feet before its pilot, Lieutenant Shane Osborn, got the nose back up.   After an emergency landing on Hainan Island, the plane was stripped of sensitive data while the crew of 24 was held--and only released after the White House issued a humiliating apology.

As for why Hainan Island is the common denominator in these two incidents, the vast underground caverns of the Yulin Naval Base hide a growing fleet of Jin-class ballistic missile submarines now capable of delivering nuclear weapons to U.S. territory.  It’s not for nothing the U.S. military wants to keep close tabs on Hainan Island.

For its part, China wants no part of any such U.S. surveillance.  In fact, the EP-3 and P-8 incidents are just two in a string involving freedom of navigation and overflight.  Others include the harassment of the USNS Impeccable in 2009, the establishment of an Air Defense Identification Zone in 2013 over the skies of Japan’s Senkaku Islands in the East China Sea, a near collision with the USS Cowpens guided missile cruiser, also in 2013, and now, as the Pentagon has revealed, numerous other recent incidents similar to the P-8.

That this is a story about much more than just two big military powers jockeying for position is evident in the parallel legal war China is fighting over how freedom navigation and overflight should be redefined. This larger story begins in 1986 with the passage of the United Nations Law of the Sea Treaty; it established an “Exclusive Economic Zone” extending a full 200 miles out from a nation’s coastline and further gave nations the fishing and natural resources rights within their EEZs.

Since passage of the treaty, China has taken the novel position that both freedom of navigation and overflight are also restricted within a nation’s EEZ.  It now insists that any nation’s military aircraft and vessels wishing to pass through its EEZ must seek its permission; and it is on this legal basis that it justifies its harassment of foreign military planes and ships in the region.

To be clear here, nothing in the actual treaty supports China’s position.  If, however, China’s new definitions of freedom of navigation and overflight were accepted within the tight confines of the East and South China Seas, this revisionist rule would be tantamount to a new Monroe Doctrine for China in Asia.  Indeed, it would effectively give China control over two of the most important and lucrative sea lines of communication in an area of the world where over 60% of future economic growth is forecast to occur.

Given the high economic and national security stakes involved, we can expect China to continue its challenge to freedom of navigation and overflight.   As to how America should respond, here are five first steps:

The White House must stop believing economic engagement will eventually turn China into a peace-loving democracy and start treating it like a serious threat.  The Pentagon should equip all U.S. military aircraft in the region with video cameras to document  aggressive behavior so China can’t keep plausibly denying it.  American companies should start bringing their production back home, if not for patriotism’s sake then because their factories in China will be at increasing risk as military friction between America and China rises.  The media must do a better job framing incidents like the P-8 in their larger context rather than relegating them to the back pages.  Finally, consumers must realize whenever they buy “Made in China” they are helping to finance a military buildup increasingly threatening to America’s economic and national security interests.

Peter Navarro is a public policy professor at UC-Irvine.  His documentary film and book “Will There Be War With China?” is scheduled for release in 2015.