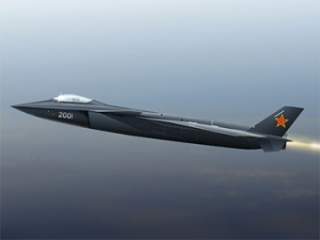 The test pilots of China’s state-run Shenyang Aircraft Corporation have been joyriding in a high-tech new aircraft. Does China already have a multi-role fighter in the works to challenge the F-35? Or is this new aircraft really “all about the program?” Chinese military research and development is notoriously secretive, so Chinese and international People’s Liberation Army (PLA)-watchers were surprised by the October 2012 appearance of the J-31, a fully-fledged, advanced fighter prototype, deployed by the Shenyang Aircraft Company. It’s similarity in shape to the F-35 is noteworthy. In recent months there has been a great deal of speculation about successful Chinese espionage against the F-35 program, although most of it has focused on the appearance of certain sensor systems on China’s prototype air-superiority fighter, the J-20. The J-20 might very well have been influenced by the F-35, but the J-31 almost certainly was.

With a rumored three prototypes in production, the J-31 might be one-half of a “high-low mix” of big J-20s for high-altitude dogfighting with the elite aircraft of China’s enemies, while the J-31 fills the ranks as the mainline fighter and strike aircraft, in a force configuration similar to what the U.S. Air Force is pursuing with the F-22 and the F-35A. But it’s not likely. It’s always hard to know in advance what the Chinese military is going to do with its technology; so far, the signs are that the J-31 is intended for export and is not going to be in service with the PLA Air Force in large numbers. There have been mixed statements from Chinese military officials and state-run media about the aircraft’s future. This could be a result of the fact that China’s military-industrial complex often employs a “generational leap-frogging” system of development. Numerous different designs are rapidly produced and used as prototypes or inducted into service in small numbers to quickly advance Chinese mastery of the technology, but also to build institutional capability for the mass production of a system that can match its international peers. This system is clear in China’s naval development: the PLA Navy has inducted five native-produced destroyer classes into service since the 1990s, each an incremental improvement over the previous one, with only the final class, the 052D, approved for mass production.

China’s aircraft development has followed a similar model in recent years. Shenyang Aircraft Corporation has produced small test batches of highly upgraded Flankers and carrier-ready Flankers, as well as the J-31. The Chengdu Aircraft Corporation, the other giant, state-run aerospace company, rolled out the J-10A multirole fighter in 2005, which was superseded a few years later by the upgraded J-10B, and is now producing the J-20 air-superiority fighter prototypes. It’s hard to imagine that the PLA Air Force will abandon their small-batch, rapid advance approach just yet and be satisfied with their first attempts at fifth-generation aircraft technology. Thus, the J-31 probably exists less for striking enemy aircraft out of the sky and more for improving the capabilities of China’s aerospace engineers. Check back in with us again in a year or two when China reveals their next prototype to get a better sense of what the F-35’s rival might look like.

Jack Mulcaire is a Center for the National Interest researcher.