China's Strategy to Undermine the U.S. in Asia: Win in the 'Gray Zone' 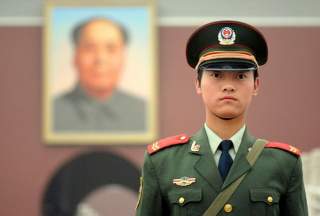 China is beating the United States in the “gray zone,” where a state attempts to make gains at the expense of a strategic competitor by using tactics that, while aggressive, remain below the level that usually triggers conventional military retaliation.

The situation is somewhat reminiscent of U.S. strategy in the 1950s under the Eisenhower administration.  Washington attempted to deter the Soviet Union with the doctrine of “massive retaliation,” which served notice that the U.S. might respond disproportionately to an adversary’s conventional military challenge by launching a strategic nuclear attack.  The premise was that the threat of all-out war would intimidate the Soviets from starting a fight at a lower rung of the escalation ladder. The obvious problem was credibility. If an adversary did not believe Washington was willing to invite nuclear war over a relatively minor and peripheral conflict, overreliance on massive retaliation had the effect of leaving the US vulnerable to a salami-slicing policy.  Thus in 1961 the Kennedy administration shifted to the “flexible response” strategy, which aimed to establish U.S. superiority at multiple levels of potential conflict short of nuclear war.

A similar adjustment appears necessary today. The U.S. armed forces are clearly better equipped than any other military for a major war.  This capability, however, is largely sidelined as Beijing demonstrates its skill at finding ways of advancing the Chinese strategic agenda – and undercutting U.S. interests – that are well short of crossing red lines. The Chinese, whose civilization produced Sun Zi’s Art of War, are huge fans of the idea that clever strategy can deliver victory over a materially stronger opponent.

The South China Sea dispute provides several examples of China’s gray zone prowess. In 2012, the Chinese established a permanent presence on previously unoccupied Scarborough Shoal.  This disputed feature is well within the exclusive economic zone of the Philippines, a US ally. China’s action violated an agreement between Beijing and Manila brokered by Washington. Beijing, however, suffered no consequences beyond diplomatic protests.

China has implemented the tactic of ordnance-free naval combat in the South China Sea. This was evident in 2014 when a large flotilla of PRC escort vessels protected a large Chinese oil rig deployed into a disputed area by ramming Vietnamese boats, sinking one and forcing others to retire for repairs.

To ward off close maritime surveillance, the Chinese have used cost-exchange ratio as a weapon against the United States.  Fishing boats intentionally maneuvering to create the risk of a collision drove off the high-tech but unarmed U.S. surveillance ship Impeccable in 2009. The same Chinese tactic worked in 2013, when an LST played chicken with the U.S. cruiser Cowpens in international waters and forced the U.S. warship to abandon its observation of a Chinese naval exercise involving China’s newly-deployed aircraft carrier. The Chinese ship was probably worth about $200 million, the Cowpens about $1 billion.

China’s rapid construction of artificial islands earlier this year in the disputed Spratly group was Beijing’s latest gray zone victory in the South China Sea. China’s audacity in building what are expected to become military bases in the middle of an international waterway shocked the region, but Washington was left with no response other than Secretary of Defense Ashton Carter’s lame (and unheeded) demand that the Chinese stop immediately.

U.S.-China gray zone contention is not limited to the South China Sea. The cyber attacks sponsored by the Chinese government also fall into this category. Although a cyber attack could potentially cause death and destruction comparable to a traditional act of war, the issue is new enough that governments have not yet developed standard responses and expectations.  China has taken full and effective advantage of this uncertainty. The U.S. government makes a distinction between strategic and economic cyber theft; the former is fair game, but the latter is criminal and subject to sanctions. Beijing, however, does not seem interested in making this distinction. Taking a “comprehensive” view of “national security,” the CCP regime classifies anything from business news to exposés about the inordinate wealth of senior Party officials as attacks on national security, to be punished accordingly. The flipside of this mentality is to view as justified any activity that helps build up China’s economic power, including theft of intellectual property from foreigners. This is a substantial violation of a principle most 21st century governments worldwide would uphold, yet the U.S. response has been ineffective, drawing only a scolding from Beijing against making “groundless accusations.”

The gains China is realizing through these opportunistic tactics in the gray zone are not comparable to the benefits of winning a hegemonic war, but they are substantial. Beijing pockets tangible winnings such as new islands under Chinese occupation and advanced technical data from rival foreign industries. The PRC also strengthens the perception that Chinese power is waxing while U.S. power wanes, implying that the smart play by the rest of the Asia-Pacific region is to accommodate Beijing and stop relying on U.S. leadership and protection.

In contrast to the United States, Tokyo faced its own gray zone problem with China forthrightly. The PRC began a campaign of continuous incursions by Chinese ships into the territorial waters or contiguous zone of the disputed Senkaku/Diaoyu Islands in July 2012 in an apparent effort to intimidate Tokyo into recognizing Chinese co-administration of the islands.  Instead of backing down from this risk-acceptant Chinese behavior, Tokyo increased its own ship patrols around the islands and elicited a public reaffirmation from its American ally that the US-Japan mutual security treaty would apply in the case of an attack on the islands.

Observers have recommended both direct and indirect U.S. approaches to Chinese salami-slicing. The direct approach might include U.S. overflights of the artificial islands (literally over them, not near them); arming of the other South China Sea claimants; increased U.S. and partner-country naval patrols in the vicinity; sanctions against Chinese entities caught engaging in cyber theft; and retaliatory US cyber attacks against Chinese targets. Indirect approaches might include stronger pressure on what CCP leaders see as their points of weakness and vulnerability, accompanied by non-public explanations to the Chinese government that the increased pressure is a response to Chinese gray zone aggressiveness and will be dialed back if Beijing is more cooperative.

In any case, the greatest urgency is to apply US intellectual and material assets toward competing with China in the gray zone.  The U.S. can leverage superior U.S. capabilities and the groundswell of regional support for U.S. leadership. The question is whether U.S. strategists can demonstrate the requisite strategic cunning and dexterity.

Denny Roy is a Senior Fellow at the East-West Center. This piece first appeared in PACNET: Newsletter here.