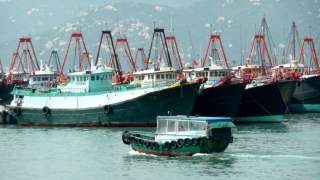 China’s militarized fishing fleet is Beijing’s analogue to Russia’s ‘little green men’. The protection of ‘innocent actors’ from local authorities (for instance, the Indonesian Coast Guard lawfully defending its EEZ) is only the latest event in which Chinese coast guard vessels were empowered to conduct acts of war.

Article 62 of the United Nations Convention on the Law of the Sea (UNCLOS) stipulates that “Nationals of other States fishing in the exclusive economic zone shall comply with the conservation measures and with the other terms and conditions established in the laws and regulations of the coastal State.” Foremost among those ‘other terms’ for fishermen must be having permission to fish inside another nation’s EEZ in the first place.

Chinese fishermen had no such permission ahead of the March 19 confrontation, and Indonesian authorities seized both boat and crew. Chinese authorities intervened in order to prevent Indonesia from enforcing its own laws within its EEZ—laws that would have seen Kway Fey 10078 summarily sunk. Indonesia’s ‘you cheat, you sink’ policy toward illegal fishing, the brainchild of Maritime Affairs and Fisheries Minister Susi Pudjiastuti, is immensely popular in Indonesia, though it has only been applied once in previous encounters with illegal Chinese fishing.

Indonesia’s seizure of Kway Fey on March 19 was fully justified by its domestic laws as well as UNCLOS. China’s shamelessly brazen and disproportionate response is synonymous with its overall defiance of international norms in defence of conveniently ill-defined ‘traditional Chinese fishing grounds.’ It fits into the pattern of recent Chinese activities to assert dominance over the South China Sea.  It also puts China’s neighbors on notice that they shouldn’t expect China to adhere to international agreements if Beijing determines that its interests aren’t served by doing so. In fact, observers now speculate that China seeks to present its control of the South China Sea as a fait accompli, reinforced by the forward deployment of what China’s foreign ministry describes as ‘defensive’ military systems onto land masses in the Paracel and Spratly islands. In addition, China has enhanced the ‘gray zone’ roles of both its coast guard and its naval paramilitary force. Just last week China engaged in maritime ‘lawfare’ by using China Coast Guard (CCG) vessels to escort unflagged Chinese fishing vessels into Malaysia’s EEZ (again, without prior permission and in defiance of international law.)

The CCG operates more than 300 vessels, over 100 of which are capable of off-shore operations far from China’s coastline. Together Indonesia, Malaysia, the Philippines and Vietnam possess fewer than 40 coast guard vessels of all types. Thus, China’s superiority in maritime lawfare is both quantitatively and qualitatively unassailable. That gives China immense leverage in any dispute, and reinforces its refusal to conduct multilateral discussions to solve multi-party disputes.

More insidious from a regional stability perspective is the growth and mission expansion of the Maritime Militia. Originally designed to augment the naval reserve, since about 2012 the maritime militia has added ‘rights protection’ to its portfolio. Moreover, China’s fishing fleet is closely integrated into the Fisheries Law Enforcement agency of the Maritime Militia. That explains the rapid response of CCG vessels to Kway Fey’s seizure—the vessel most likely possessed a military-grade transmitter linked directly to Chinese authorities. Thus, China can calibrate at will the implications of any encounter at sea between Chinese fishermen and another nation. For example, should Indonesia again seize a Chinese fishing vessel, China could invoke Article 95 of UNCLOS and demand immunity for its vessels owing to their Maritime Militia affiliation (and thus technically a ‘warship’) or even characterise the seizure of its vessels as a casus belli. Such a potentiality must give all of China’s neighbors pause, and reinforces the urgency of adopting Singapore’s recent proposal to extend the Conduct for Unplanned Encounters at Sea (CUES) protocols to those involving coast guard vessels.

China is engaged in a multi-faceted campaign to dominate the South China Sea in order to reduce all of Southeast Asia to tributary status. Australia has a vital stake in preventing this outcome and in upholding international law; it can no longer sit back and let the US bear the entire burden. In the spirit of the Defence White Paper, Australia should immediately offer to augment Indonesian and Malaysian coast guard operations in defence of their EEZs, either unilaterally—through Australia’s membership in the Heads of Asian Coast Guard Agencies Meeting regime—or through the newly-instituted Experts’ Group Meetings of the ASEAN Coast Guard Forum. Doing so will help those nations buy time to enhance their own maritime law enforcement capabilities. Just as important, it will demonstrate the Turnbull government’s commitment to meeting all four of the objectives for international engagement laid out in the White Paper: enhance ADF capability; generate and sustain Australia’s regional and global influence; generate active and effective security partnerships; and enhance international security resilience.