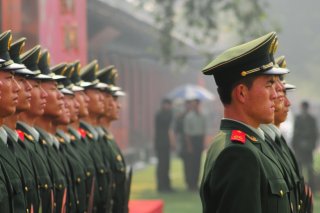 In November of every other year, aviation experts descend on the Chinese city of Zhuhai for a rare look at the future of China's air power. Over the last ten years, the International Aviation and Aerospace Exhibition have charted the progress of China's drone fleet from concept art to functioning models. Now, as the country's investment in drone technology helps it catch up to the competition, the technology on display at Zhuhai next week could pose another challenge for the global arms control effort.

Chinese companies have boasted about muscling into the international drone market, and they appear to be making headway. In May, it was revealed that Saudi Arabia purchased an unknown number of Chinese-made Wing Loong drones, a rough equivalent to the US-made Predator. This followed earlier reports of Chinese collaboration with the Algerian military, and suspicion that Uzbekistan, the UAE and Pakistan are operating Chinese drones. And in an August joint military exercise, China conducted a live-fire demonstration of drone strikes for its partners in the Shanghai Cooperation Organization.

All this comes at a time when American experts are worried about their diminishing lead in unpiloted aerial vehicle (UAV) technology.

Several years after the Predator boom, the US military has scaled back its drone acquisition, to the point where it struggled to cobble together enough vehicles for surveillance of the Islamic State while the fighting season in Afghanistan was also getting underway. The US Navy is developing the only known future combat drone, and after being watered down to save on cost it is now the subject of review. In the meantime, with American export licenses for armed drones limited to the UK, there is a gap in the worldwide market, which China hopes to plug.

Aiding China's export strategy are several underlying factors. In a country where central authority often needs to be imposed on wayward local officials, and where privacy restrictions don't really exist, technology that offers persistent surveillance is in high demand. Beijing has already used drones to keep an eye on polluting industries, corrupt officials and drug smugglers, assist the emergency response during earthquakes and support policing operations against Uighur-led violence in Xinjiang. All of these roles are likely to expand in the years ahead.

Drones also have commercial applications for China. Industries that are modernizing in the developing world, like agricultural science and environmental mapping, rely on aviation. But the shortage of commercially available flight in China is making otherwise cheap drones a viable substitute.

As the Chinese military pushes ahead with research into next-generation fighters and bombers, improvements in engines and sensors will likely flow over into better equipment for future drones. As a result, China is forecast to become the global hub of drone production over the next decade, with the Chinese Government as the main buyer. But this raises some questions for a country with a patchy record on weapons proliferation.

China is not a member of the Missile Technology Control Regime (MTCR), the major arms control body for regulating the sale and transfer of unmanned technology. This Cold War regime was originally meant to curb the proliferation of launch vehicles for weapons of mass destruction, imposing a “presumption of denial” against the export of airborne systems able to carry dangerous payloads like nuclear weapons or biological agents. These restrictions also extend to the heavier class of drones, like the Predator. The US has tried to modify the terms of the MTCR to permit the sale of more drones, but faced with resistance from European partners, the Obama Administration is unsure of how far it can push the issue.

China's position is more concerning. It has long promised to adhere to the MTCR rules, but its 2004 request for membership in the arms control body was denied, partly from suspicion over its past violations and partly from doubt about its accountability in any future regime.

Non-proliferation experts agree that China has been cleaning up its act on weapons sales in recent years, but there have also been some notable lapses. With so little transparency over its drone programs, it is hard to know whether China will abide by its unilateral commitment to the regime. If the Wing Loong resembles the Predator, as China claims it does, then its sale to Saudi Arabia very likely pushed close to the line of the MTCR.

To be sure, China selling drones may not provoke the kind of proliferation disaster , which many critics fear. The threat of a precise “targeted killing” campaign relies on a sophisticated and expensive infrastructure. Satellite bandwidth, guidance software, remote operating terminals, electronic sensors and informants on the ground are all needed for drones to operate far from home with any accuracy. This is difficult for all but a few of the most powerful countries to manage.

But there are many uses for UAVs among countries, which struggle with messy, protracted conflicts. With the Hadithi rebels seizing cities in southern Yemen, a Saudi Arabia losing trust in American diplomacy might be tempted to intervene in the neighboring territory with its own drones; or in a Myanmar criticized for its treatment of the Rohingya Muslims, a quick trade with Beijing for drones may secure the best tool for use against rebellious hill tribes. Like China's small arms exports, drones could further strain the political stability of the developing world.

As UAV technology improves, this problem will become more acute. Already, the latest vehicles on the market blur the distinction between armed drones and cruise missiles. For instance, the Israeli-made Harop is capable of loitering in the air until it detects the radar signal of an enemy, arms itself and then flies headfirst into a target. If the sale of these advanced drones is not carefully regulated, the guidance and flight technology can be adapted to other missiles, undercutting the MTCR. Drones will offer an ideal vehicle for dispersing other types of prohibited weapons. Already, Russian scientists have warned that slow-flying drones dispersing biological weapons could deliver more damage across a wider area than a standard ballistic missile.

With massive human and intellectual resources being poured by the Chinese state into combat drones, these problems will at some point make their way onto the agenda in Beijing. The state of drone technology and the potential buyers in the crowd at Zhuhai will shed some light on whether that time has now arrived.