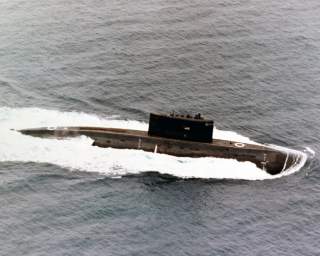 The visit of the Chinese Type 039 Song class submarine to Colombo, Sri Lanka, earlier this month passed with little notice, but it's the first time one of the People's Liberation Army-Navy's (PLA-N) diesel-powered submarines has emerged in the Indian Ocean, and its a rare PLAN submarine visit to a foreign port. Naturally, this visit, and an Indian Ocean patrol by a Chinese nuclear submarine at the start of this year, is prompting discussion about the expanding reach and capability of China's navy.

Yet beyond signaling China's willingness to deploy its submarines far beyond the first island chain, this visit also highlights a dilemma the PLAN must address as it develops into a blue water navy: how to rescue its submarines in the event of disaster.

The submarine "Great Wall 0329" docked at the Chinese-funded Colombo International Container Terminal in Sri Lanka from 7 to 14 September, just before a one-day visit to the country by Chinese President Xi Jinping. Yesterday the Chinese Ministry of Defense's spokesperson Colonel Gen Yengsheng confirmed that the submarine visited while in transit to join the PLA Navy task force engaged in counter-piracy operations near the Somali coast and Gulf of Aden. The US, Singapore, Indonesia, Pakistan and Russia were all notified of the deployment.

Submarines have deployed to support Indian Ocean counter-piracy missions before: in 2010 the Dutch navy sent a Walrus class diesel-electric submarine to conduct reconnaissance of pirate operations and ports. But the Chinese Type 039 is a smaller submarine. And though the US military's Pacific Commander describes China's submarine fleet as "large and increasingly capable," China's commanders have little apparent proficiency in long-range deployments. The visit to Sri Lanka is the leading edge of Chinese conventional submarine operations.

The presence of Chinese submarines in the eastern Indian Ocean and approaches to the Malacca Straits, should it become regular, will change the strategic calculations of a number of other navies in the region.

As Chinese submarines range further from home, the Chinese Navy must find a solution to the vexing problem of how to rescue downed or damaged submarines. The risk of submarine accidents is real: since 2000 there have been at least 30 incidents reported by the world's 40 submarine-operating navies. In 2003, all 70 crew onboard the PLAN Ming-class submarine "Great Wall 61" suffocated after an engine malfunction while on patrol in the Bohai Sea. The risk of collisions will also increase in coming years as Asian waters become home to more submarine activity. China, Korea, Thailand, Vietnam, Myanmar, Indonesia, Singapore, Australia and Japan all have plans to grow their submarine fleets over the next decade.

In a 2008 article, International Submarine Rescue: A Constructive Role for China, US Naval War College professors Lyle Goldstein and William Murray highlighted both the importance of submarine rescue for the Chinese Navy and its limited capabilities in this regard, raising the prospect of international naval cooperation to help China bridge this gap. Though the PLAN now participates in international naval exercises like RIMPAC, it has (in the opinion of Australian naval officials) been less than enthusiastic about integrating into common international naval logistics systems. International cooperation on submarine rescue is particularly sensitive, given the opportunities it affords for rival naval personnel to observe the characteristics of Chinese hulls and systems.

Yet China must find a way to be able to rescue its submariners. The political impact of failing to rescue a downed submarine can be immense, as Russia learned during the Kursk incident. In China's 2003 Ming incident, the PLAN's failure to find the doomed submarine for more than two weeks created sufficient political heat that then Chinese President Jiang Zemin was prompted to personally visit and investigate. A decade later, public scrutiny is more intense, as shown by the response to the 2011 high-speed train crash. The pressure on a Chinese government seen as unable to rescue submariners would be intense.

Broadly, there are two ways to achieve the rescue of sailors trapped in a disabled submarine. Both rely on the availability of diving bells (or submersibles) able to dock with the submarine and transfer crew to the surface. Both rely on a response that can locate and reach a downed submarine within 72 hours.

The first method is to position submarine support vessels, or submarine tender ships, within a reasonable range of operating submarines. This is the approach China has taken to date to support submarine operations close to home. In 2010 the PLAN launched a Type 926 submarine tender optimized to carry a UK-constructed LR7 submersible, the most advanced of its type in the world. But the tactical difficulty in using tenders for submarine rescue is that their presence affords competitor navies a reasonable estimate of where China's submarines are operating.

So when the "Great Wall 0329" operates through the Indian Ocean it will be accompanied by the Changxing Dao', a Type 925 submarine support ship. China has yet to resolve the dilemma of how to underwrite the safety of its submariners far from home. How it manages this problem will indicate much about the sort of international power China plans to be.