Coming Soon to a Highway Near Russia : America's Lethal  A-10 Warthogs 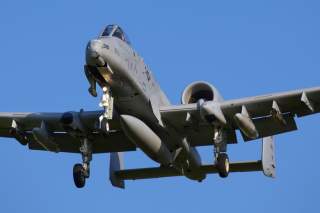 Thirty-two years ago, A-10 Warthogs landed on a German highway while practicing for war (yes, we have the footage, see below). It was an exercise born of the necessity of the Cold War, since Soviet nuclear missiles could have easily destroyed NATO’s air bases in the event of open hostilities.

The Warthog, a low-flying close air-support plane, would not land on a highway again until Monday (see below). Four A-10s from the 107th Fighter Squadron “Red Devils,” Michigan Air National Guard touched down on a highway as part of the large-scale Saber Strike exercise, which includes more than 4,500 troops from 13 NATO countries.

Not only was the event highly unusual, it was where — Jägala, Estonia — around 100 miles from the Russian border.

The main purpose of landing on a highway instead of a traditional runway is to disperse aircraft, making them harder to target. Basically, it’s a strategy to force your enemy into a game of whack-a-mole. The more bases, airfields and landing strips you have, the more places aircraft can hide.

“Frequently repositioning forces across a base cluster could induce an enemy to dilute its strike salvos over a larger area and possibly waste weapons on false targets,” Mark Gunzinger and Bryan Clark wrote in a May report for the Center for Strategic and Budgetary Assessments, a national security think thank.

Dispersing aircraft also makes it more difficult for an attacker to assess damage after a strike. With lots of targets in a lot of different places, you need more sensors, eyeballs and aircraft to determine whether follow-up attacks are necessary.

Given that NATO depends on Saber Strike and other exercises like it to deter Russia, it’s not shocking highway landings have returned. The Baltic States have developed highway networks which sit on the European Plain, making the terrain low and flat.

The Baltic States are also vulnerable. The Kremlin can mass long-range cruise missiles and ballistic missiles to cover the entire territory. In the event of a localized conflict, it’s unlikely NATO could outgun the Russians in the air … at least in the beginning.

In 2014, the RAND Corporation wargamed out a Russian attack on Estonia and Latvia. “Because the Russian Air Force is sufficiently powerful to resist NATO’s quest for air superiority for multiple days,” a follow-up report stated, “the Red team was able to create ‘bubbles’ in space and time to launch massed waves of air attacks against this NATO force.”

The report noted that a successful defense of the Baltic States will require a “degree of air-ground synergy … and also require a NATO command structure able to plan and execute a complex, fast-moving, highly fluid air-land campaign.”

There are echoes of that “synergy” in the A-10 highway landings. As Thomas Gibbons-Neff noted at the Washington Post, joint terminal attack controllers — or JTACs — guided the Warthogs to the highway after the planes completed a ground-attack exercise.

JTACs are a crucial element of an air strike, helping guide an attacking plane toward targets (which may not be visible to the pilot) on the ground.

The last time an A-10 landed on a highway was in March 1984 during Exercise Highway ’84 near Ahlhorn Air Base in Germany. But that the United States has returned to Cold War tactics doesn’t mean we’ve gone back in time.

For one, the scale of Saber Strike doesn’t come close. During Exercise Highway ‘84, nearly 400 aircraft landed on a stretch of the Autobahn during several days. Which makes 2016’s version … around 400 times smaller in scale.

A @usairforce A-10 lands on a highway for 1st time in 30 years as part of exercise #SaberStrike in #Estonia pic.twitter.com/rDxhB8ovVY