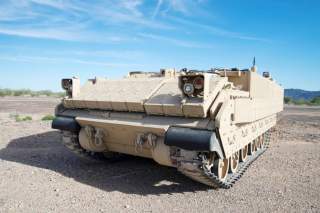 The new AMPV is, like its predecessor M113, a tracked vehicle engineered to handle rugged and rigorous terrain; however unlike it predecessor the new infantry carrier will be built with new, reinforced armor, improved mobility and state-of-the art next-generation newtorking technology such as force tracking systems, mission command applications and Satcom links.

While the Army remains focused on being needed for counterinsurgency possibilities across the globe and hybrid-type wars involving groups of terrorists armed with conventional weapons and precision-guided missiles -- the service is identifying, refining and integrated technologies with a specific mind to attacking enemies and protecting Soldiers in major-power war.

Major, great-power war would likely present the need for massive air-ground coordination between drones, helicopters and ground vehicles, infantry and armored vehicle maneuver formations and long-range weapons and sensors. The idea is to be ready for enemies equipped with high-end, high-tech weapons such as long-range rockets, anti-tank guided missile and air attack capabilities.

As evidence of this approach, Army leaders point to some of the attributes of the Armored Multi-Purpose Vehicle as a platform well-engineered for large-scale mechanized warfare.

“We are excellent at counterinsurgency,” Lt. Gen. Michael Williamson, Military Deputy, Assistant Secretary of the Army – Acquisition, Logistics and Technology, told Scout Warrior in an exclusive interview. “We’re developing systems to be prepared for the full range of potential conflict.”