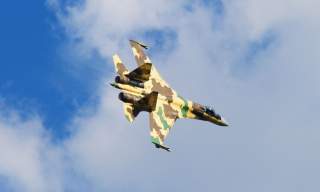 Russia has reached an agreement with the People’s Republic of China to supply the nascent Asian superpower with twenty-four Sukhoi Su-35 Flanker-E fighters. The two countries have been discussing the sale of the powerful Russian-built jet since at least 2011.

“Long negotiations for the supply of Su-35 in China are completed, we signed a contract,” Sergei Chemezov general director of Rostec—which is a Russian government entity that helps facilitate Moscow’s defense exports—told the Russian daily Kommersant.

According to Kommersant’s Russian government sources, the People’s Liberation Army Air Force will receive twenty-four jets for a total of $2 billion dollars. The unit price for each Su-35S is expected to be $83 million. “China officially became the first foreign customer of the Su-35 is unprecedented in the history of the contract deliveries of combat aircraft,” a Russian defense source told the newspaper.

It has taken Russia and China a long time to reach this deal. A preliminary agreement had been reached in 2012, but Russia and China have not taken any concrete steps on finalizing an accord for the new jets until now. Much of the delay can be attributed to haggling over the price for the jets, but the Chinese have also insisted that the Russians customize the jet’s cockpit for their particular requirement. That might include Chinese language displays.

Meanwhile, the Russians had initially insisted that the Chinese buy a minimum of forty-eight jets because of fears that Beijing simply wanted to harvest the Su-35 for its technology—particularly, the radar, electronic warfare systems and engines. If Kommersant’s sources are correct, the new deal does not allow for China to license build the Su-35, instead the PLAAF will receive jets manufactured in Russia. Of course, that won’t stop the Chinese from picking the Su-35 clean for technology—it’s just makes the process more difficult.

Ultimately, Russia ended up signing a deal to sell only twenty-four Su-35s to China. Moscow’s hand has been weakened by European sanctions and low oil prices, which means that Russia might have needed the money. The Su-35 deal comes on the heels of several other high-profile Chinese purchases including one last year for the powerful S-400 surface-to-air integrated air defense system worth about $1.9 billion. Once the S-400 is operational, the weapon would allow China to engage Taiwanese aircraft taking off from almost anywhere in on the island from across the strait.

The addition of the Su-35 to the PLAAF arsenal means that China will be about to learn more about its AL-41F1S engine, Ibris-E radar and electronic warfare suite. The Chinese have made huge technological advances, but Russian military technology—particularly for jet engines is light-years ahead. Once the Su-35 is delivered, the jets are almost certainly to be reverse engineered and copied. One can initially expect advanced derivatives of the J-11 Flanker clone, but an entirely new Su-35 clone might follow not long afterwards.