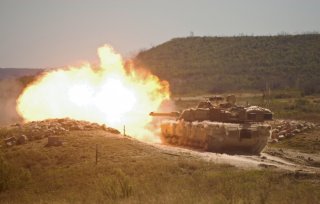 President Ronald Reagan was the individual most responsible for winning the Cold War. His success was based on recognition of a simple fact: Soviet aggression could only be deterred and negotiations with the Kremlin’s leaders conducted successfully if the United States was militarily strong. Reagan framed his conception of the relationship between peace and strength early in his presidency:

But unless we demonstrate the will to rebuild our strength and restore the military balance, the Soviets, since they are so far ahead, have little incentive to negotiate with us. If we had not begun to modernize, the Soviet negotiators would know we had nothing to bargain with except talk. They would know we were bluffing without a good hand because they know what cards we hold - just as we know what is in their hand.

Today, the situation confronting the United States is similar to that faced by Reagan more than three decades ago. Now, like then, our adversaries are seeking to take advantage of this country’s military weakness. Russia, in particular, feels free to speak the languages of force and intimidation. It seeks to use force to upset the international order and redraw the boundaries of Europe. The Kremlin has invested hundreds of billions of dollars to modernize its military with a particular eye towards countering areas of U.S. and NATO advantage and creating asymmetric capabilities that can support its aggressive ambitions with a minimum risk of direct conflict with the West. Eight years of the Obama Administration’s foreign and defense policies clearly demonstrate that weakness only encourages Russian misbehavior and accommodation only whets Moscow’s appetite for aggression.

The U.S. military is struggling to respond to an increasing array of ever-more capable threats. The situation is particularly serious for NATO. Compounding this problem is the fact that the United States withdrew most of its combat forces from Europe. Now, as Lieutenant General Ben Hodges, the commander of all U.S. Army forces in Europe, admitted, he has the difficult task of trying to make 30,000 soldiers look like 300,000.

It is time to accept the fact that peace can only be guaranteed through strength. For Europe and the NATO Alliance this means rebuilding and then maintaining a capability to meet aggression at any level. Nothing provides a clearer sign of a willingness to oppose aggression than the presence of ground forces at the points or places of contention. As I asserted in my speech to the Heads of State and Government at the NATO Warsaw Summit:

The Alliance needs conventional and nuclear capabilities sufficient to reassure our own members and deter those who threaten us. That must include a sizable, persistent forward presence in the east and southeast, combining fixed and rotational elements and pre-positioned equipment, with contributions from all 28 allies.

While all the military services have suffered as a result of declining defense budgets, in general, and the spending caps of the Budget Control Act, in particular, the U.S. Army is in especially bad straits. Following nearly 15 years of counterinsurgency warfare, it is now being asked also to prepare for major conventional conflict, possibly in Eastern Europe. It must make this shift while cutting end-strength and seeing defense budgets shrink. The Army also is struggling to make up for what can only be described as a two-generations-long modernization drought. As a result, the Army is facing a strategic “perfect storm” consisting of inadequate end-strength, a lack of resources for modernization and the prospect of an imminent conflict with a major power on their home turf. Even if more resources were available for modernization, the Army lacks the time for the traditional 20-year acquisition program.

Congress needs to pay particular attention to Army modernization. This means ensuring that there are adequate resources available to invest in the kinds of capabilities the Army needs to address a major conventional conflict. But equally important, Congress must help focus Army modernization efforts on fixing near-term capability gaps through modernizing the lethality, survivability and connectivity of current Army forces.

Finally, Congress needs to have a full and open debate regarding the size of the Army. I, along with Representative Chris Gibson and other House colleagues, introduced the POSTURE Act to begin this discussion and debate.  As we have seen repeatedly in recent years in Eastern Europe, the Middle East and Asia, the majority of conflicts have been about land and people.  While air and naval forces will play a critical role in deterring aggressors or fighting and winning this nation’s wars, it is the ability to put boots on the ground that will ultimately determine whether conflicts can be deterred or wars won. Today’s Army is simply too small to meet the demands placed on it even before the force levels that would be required in order to fight and win a major conventional conflict.  The House version of the National Defense Authorization Act for Fiscal Year 2017 takes the necessary first steps in stopping end-strength reductions, and begins the process of reversing the drawdown to help the Army begin restoring capability and capacity.