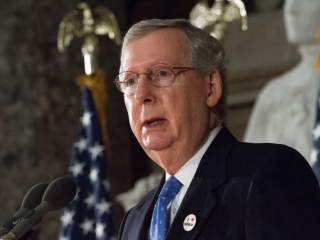 Congressional leaders announced the details of a $1.1 trillion spending bill to fund the government on Tuesday night. But with spending levels already predetermined, lawmakers were more concerned with what policy provisions were attached to the legislation.

The spending legislation will be introduced with a package renewing billions of dollars in tax breaks for businesses and low-income Americans. Text of the 2,009-page spending bill was released at 2 a.m. Wednesday; the separate 233-page tax-extenders bill was released just before midnight.

The result of the secretive negotiations is compromise, with both Republican leadership and Democrats claiming wins.

House Speaker Paul Ryan (R-WI) and Senate Majority Leader Mitch McConnell (R-KY) are able to brag about at least some policy provisions included in the spending bill, most significantly measures ending a 40-year-old ban on oil exports and stopping a bailout of Obamacare’s risk corridor program for health insurers.

The bill does not contain measures restricting the Syrian refugee program, ending funding for Obama’s executive actions on immigration or defunding Planned Parenthood. Conservatives also opposed the price tag of the $1.149 trillion spending bill, which was set by the Bipartisan Budget Act last month.

Conservatives shook by terrorism fears had said a measure toughening screening of refugees from Syria and Iraq to the United States would have ensured their support for the underlying spending bill, though they believe it spends too much money.

Democrats and President Barack Obama worried the proposed screening measures would effectively slow to a halt the president’s plan to resettle 10,000 Syrian refugees this fiscal year, a small portion of the number of Syrians fleeing war in that country.

The spending bill does include a policy provision related to national security that both parties and Obama support: a measure targeting a program that allows foreigners from certain allied countries to travel to America without a visa. Language in the spending bill would reform the visa waiver program, preventing individuals from visiting the U.S. without a visa if they’ve previously traveled to countries like Iraq or Syria, where the Islamic State terrorist group is most active.

The spending package, known as an omnibus because it combines 12 appropriations bills, is expected to pass with mostly Democratic votes, while the tax-extender package is designed to get more Republican support.

The tax package, meanwhile, includes a five-year extension of wind and solar tax credits, according to The Hill.

Ryan told a closed meeting of his Republican conference Tuesday night that a deal had been reached. The House and Senate will likely vote on the measures later this week, but will first pass a continuing resolution keeping the government funded through Dec. 22. Republican leaders will be asking their members how they plan to vote Wednesday morning, according to one lawmaker.

Heritage Action for America chief executive Michael A. Needham said the package represents the most sweeping changes to tax policy since 2012.

“In fewer than 48 hours, lawmakers will likely be asked to vote on two massive bills that were negotiated behind closed doors over the past several weeks,” Needham said. “Heritage Action is reviewing both bills and will educate conservative constituents across the country on the policies buried in all 2,242 pages.”

Before his Oct. 30 departure, former House Speaker John Boehner helped negotiate the Bipartisan Budget Act with Obama that set spending levels above caps negotiated in 2011. Upon becoming speaker, Ryan has said he was left in a difficult position, referring to the spending bill as a “crap sandwich.”

Josh Siegel is the news editor for the Daily Signal, where this article first appeared.