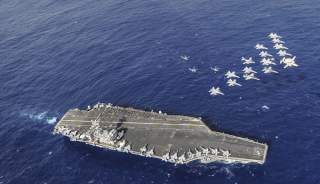 The U.S.-China Economic and Security Review Commission is requesting expert proposals to provide a one-time unclassified report on China’s development of advanced weapons.

4. Direct-ascent, co-orbital, and other anti-satellite weapons in addition to counterspace electronic warfare capabilities; and 5. Unmanned and artificial intelligence-equipped weapons.

The RFP also places a premium on the need for reports which detail the implications of China's advanced weaponry for the United States. This includes an examination of potential U.S. countermeasures and areas of needed developmental emphasis, along with assessments of relative competitive advantages in key areas of weapons development.

The project seems unequivocally aimed at helping lawmakers and policy leaders better apprehend the fast-moving trajectory of China's military modernization and weapons development. The request for a report comes amid a broader context of US concern about many areas of Chinese progress in developing next-generation weaponry. Several examples among many include reports of China's testing of hypersonic weapons, a development which could dramatically change the threat calculus for aircraft carriers and other US surface warships, among other things.

China's rapid development of new destroyers, amphibs, stealth fighters and long-range weapons is quickly increasing its ability to threaten the United States and massively expand expeditionary military operations around the globe, according to several reports from teh US-China Economic and Security Review Commission in recent years.

As examples, the report catalogues a number of aggressive Chinese military or maritime militia encounters:

-  In May 2016, two PLA Air Force fighters conducted an unsafe intercept of a U.S. EP-3 aircraft, causing the EP-3 to dive away to avoid a collision.

-   In 2013, a PLA Navy ship crossed the U.S. guided missile cruiser Cowpens’ bow, causing the ship to alter course to avoid a collision.

-  In 2009, the U.S. Navy ship Impeccable was harassed by maritime militia boats in the South China Sea.

- In 2001, a PLA Navy fighter collided with a U.S. Navy EP-3 reconnaissance aircraft over the South China Sea.

Additional instances of Chinese provocation in recent year include placement of surface-to-air-missiles and fighters in sensitive areas of the South China Sea, along with its announcement of an "Air exclusion zone."  While the US military flew B-52 bombers through this declared zone in a demonstration of defiance, the move did demonstrate China's growing willingness to be aggressive. In addition, Chinese "land reclamation" and territorial claims in the South China Sea prompted US "freedom of navigation exercises" to unambiguously thwart China's claims.

As part of a detailed effort to document China's growing influence as an expeditionary global power, the Congressional report highlights a range of Chinese deployments and worldwide exercises beyond their borders or more immediate regional influence. From the report:

- Indian Ocean far sea deployments: In early 2014, Chinese surface combatants carried out far sea training, during which they transited through the South China Sea, into the eastern Indian Ocean, and then sailed back to China through the Philippine Sea. During the 23-day deployment, the PLA Navy conducted training associated with antisubmarine warfare, air defense, electronic warfare, and expeditionary logistics.

- In addition to ongoing antipiracy operations in the Gulf of Aden, China dispatched an intelligence gathering ship to the Indian Ocean in 2012, and has deployed four classes of submarines (both nuclear and conventionally powered) to the Indian Ocean.

The 2016 report, coupled with the commissions detailed chapter on Chinese military modernization in a prior 2014 report, bring a sharpened focus upon the detail of Chinese ship, weapons and aircraft improvement and construction.

At the same time, despite these developments, the report does point out the China will need to sustain its current pace of military expansion for years to come in order to truly rival the US military's global reach.

"To support, sustain, and defend long range operations, the PLA must continue to develop or procure large amphibious ships, heavy lift aircraft, and logistical support capabilities, as well as continue to improve command and control capabilities," the report states.

The  2014 U.S.-China Economic and Security Review Commission recommended to Congress that the U.S. Navy respond by building more ships and increase its presence in the Pacific region – a strategy the U.S. military has already started.

Opponents of this strategy point out that the U.S. has 11 aircraft carriers, the Chinese have one and China's one carrier still lacks an aircraft wing capable of operating off of a carrier deck.

However, the Chinese are already beginning construction on several of their own indigenous aircraft carriers. China currently has one carrier, the Ukranian-built Liaoning.

The commission also cites other platforms and weapons systems the Chinese are developing, which will likely change the strategic calculus regarding how U.S. carriers and surface ships might need to operate in the region.

As evidence of the impact of these destroyers, the report points out that these new multi-mission destroyers are likely to form the bulk of warship escorts for Chinese carriers - in a manner similar to how the US Navy protects its carriers with destroyers in "carrier strike groups."

"China seeks to construct a class of amphibious assault ships larger than the YUZHAO class that would include a flight deck for conducting helicopter operations. China may produce four to six of these Type 081 ships with the capacity to transport 500 troops and configured for helicopter-based vertical assault," the report says. Some observers have raised the question as to whether this new class of Chinese amphibs could rival the US Navy's emerging, high-tech America-Class amphibious assault ships.