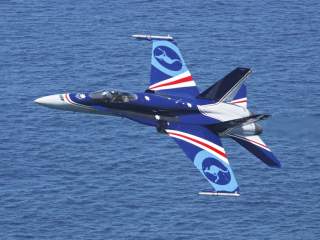 In a previous century the Royal Australian Air Force (RAAF) did not always fly technologically advanced aircraft that gave it uncontested regional air superiority. That's a statement which anybody born since the mid-1970s probably has trouble believing, but not only is it true, these times are now also returning.

By the end of the Vietnam War, the RAAF operated more than one hundred Mirage III fighters originally bought as point defense interceptors to counter Soviet-built bombers flying out of Indonesia. The trouble was that times were changing: Sukarno fell, others countries in the region became richer, and better jets were bought. For some time, RAAF pilots thought they still had the edge. But then they realized this was no longer the case, as RAAF fighter pilot of the time Chris Mills notes: “My personal experience of loss of air superiority occurred in 1975. I was flying an air combat mission in a Mirage near Butterworth, Malaya at the moment this happened.”

At that time, the Royal Malaysian Air Force had re-equipped with F-5Es that had good maneuverability, better missiles and avionics, as well as a low radar cross section. As Mills recounts, their pilots might have had only fifty hours in the aircraft, but they proved superior in mock air combat to RAAF pilots with thousands of flying hours on Mirages.

This situation is now repeating. Other people are getting better jets. This in itself is no cause for concern, as Foreign Minister Julie Bishop recently said most countries in the Asia-Pacific are simply modernizing as their military equipment ages. Moreover, most countries near us are democracies and if there is an iron law of international relations it is that democracies don't fight each other. Accordingly, the focus shifts to countries with more authoritarian governments, and in this our principal ally has sharpened our gaze for us. U.S. Defense Secretary Ash Carter sees the return of geo-political competition in the shape of China and Russia driving future American defense planning and budgets.

In terms of thinking about regional air superiority, the rise of the People's Liberation Army Air Force (PLAAF) has been stunning.

Over the last twenty years, the PLAAF has been transformed through an extensive but focused re-equipment program. As a result the PLAAF's fighter force has dramatically changed. It has gone from having an obsolete, 1950s technology fighter force to today having a highly capable, very large and up-to-date fighter force equaled only by the U.S. Air Force and the Russians. For Asia-Pacific air forces, large and small, the PLAAF fighter force has become the benchmark.

This modernization program to make the PLAAF a “strategic air force” continues at a brisk pace. Indeed in 2014 Chinese President Xi Jinping declared that the country must “accelerate [its] construction of a powerful people's air force. . . in order to support the realization of the China dream and the dream of a strong military.”

Let's get some perspective.

In 1995, twenty years after Chris Mill's epiphany, the RAAF's F/A-18 'classic' Hornet fighters were clearly technologically superior to the best fighters the PLAAF flew—and had been for years. Today the situation is reversed and is worsening. In simple terms—and arguably a bit optimistically for the RAAF—the continuing development of the PLAAF means that by 2020 it will comprise about 1,100 modern fighters as follows:

Meanwhile in 2020, two-thirds of the RAAF's fighters will still be the 1980s classic Hornets. This was not as originally intended. The last of these should have left service last year but with the F-35 delayed, this now looks more like 2022. Well done, then, former Defence Minster Brendan Nelson in disregarding RAAF advice and acquiring twenty-four Super Hornets when difficulties with the F-35 program first became apparent. This purchase has allowed some semblance of regional technological air superiority capability to be maintained.

Moreover in December 2020, No. 3 Squadron at RAAF Base Williamtown with sixteen F-35A aircraft should finally achieve initial operational capability presaging the withdrawal of the aging classic Hornet fleet. With government decisions made to acquire seventy-two F-35As, the only apparent obstacle to this seems to be if the F-35 slips again. In this regard, the latest DOT&E report highlights several troubling issues, in particular with software development—the bane of modern aircraft designers.

Some will say I am being too hard on the RAAF's classic Hornet fleet as it is unlikely that the RAAF will ever need combat fighters comparable to those the PLAAF operates. And even then, fighters operate within a complex air defense system where the RAAF's E-7A Wedgetail AEW&C aircraft will give superb situational awareness, allowing even outclassed fighters to win. Maybe. Maybe not. It greatly depends on the circumstances. But if you were flying the fighter, is that a risk you wish to take? Certainly a technologically better fighter force achieves higher kill ratios allowing a small air force much greater relative combat power. Conversely, an air force flying a technologically inferior fighter won't deter most adversaries.

Air superiority in itself will not win a war, but it is essential to not losing one. When Australia first committed to the F-35, the RAAF had some one hundred fast jets as good as any in the Asia-Pacific region. In the next few years this looks set to drop to only thirty-six fast jets, including the Gillard Government's purchase of twelve Growler aircraft derived from the Super Hornet. Australia does not need to keep the aged classic Hornet fleet in service any longer than it must. The Asia-Pacific has moved on, so should the RAAF. The new era of contested air superiority demands it.