Could This Be ISIL's Next Target? 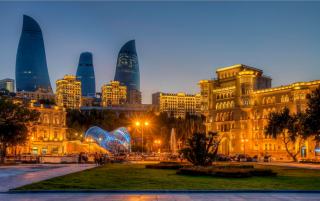 Could ISIL gain traction in Azerbaijan? Amid the welter of analyses about ISIL in Syria and Iraq, little attention has been paid to the potential impact of ISIL or other Islamic extremist movements in another important area--namely, the strategically sensitive south Caucasus region and especially energy-rich Azerbaijan. The anti-ISIL plan for a Kurdish autonomous entity has even greater implications for the south Caucasus and its several secessionist movements.

First, the matter of ISIL. Located just northeast of Iraq, Azerbaijan has a mostly Shi’ite population with a Sunni minority. The state is secular, but President Ilham Aliyev has raised the specter of Islamic extremists in the north where his country borders Russia along the Caucasus Mountains. Twenty-six alleged fighters for Islamist groups, ISIL among them, were arrested last week on their return to Azerbaijan.

Is Azerbaijan an Iraq-in-the-making? How real is the threat? How can we tell?

Azerbaijan is unlike Iraq in numerous meaningful ways. Neither religious identity nor rhetoric has been a factor in Azerbaijani politics for over a century. The leader of one Azerbaijani opposition party commented that sectarian politics like those in Iraq are “primitive.” The population of Azerbaijan though mostly Shi’ite is Turkic. Its history of Shi’ite-Sunni cooperation, societal modernization and emergent secularism goes back to the 19th century. Azerbaijan’s reformers achieved short-lived victory in their republic of 1918-20.

The arrival of the Bolsheviks in April 1920 led to the imposition of violent, if sporadic, anti-religious campaigns, which were distinct from the evolutionary secularizing efforts of the native elites. Thus, the comparison between today’s Azerbaijan and Iraq, where secularism was imposed mainly by the Ba’ath party since the late 1960s, shows the greater longevity and depth of secular life in Azerbaijan. Tolerance of religious difference, especially in Baku, is shown not merely by the presence but by the growth over time of such non-native groups as the Jewish community which grew rapidly in the early 20th century as Jews fled pogroms in Russian and Ukraine. It remains active today. The disappearance of the Baku’s long-established Armenian community and closing of its church can be traced to the bitter and unresolved conflict over Nagorno-Karabagh rather than a general intolerance of Christians. Overall, religious expression is considered a personal matter in Azerbaijan, and in society as a whole, people who attend a mosque or wear the hijab are neither feared nor ostracized.

At the same time, it would be premature to suggest that Azerbaijan is immune from Islamist appeals. The Sunni population in the north can hardly be insulated against the radicalism of the north Caucasus, but the nature of the spill-over remains murky. Some experts have suggested that sectarian conflicts in the region have encouraged or deepened divisions within Azerbaijani society, especially in rural areas. But hard evidence is illusive.

The Aliyev regime’s designation of all sorts of religious people and groups as Wahabbis or Salafis is unhelpful. Religious individuals are persecuted without differentiation. Such broad-brush treatment impedes efforts to get a clear reading on the type and depth of political uses of Islam and the potential for future radicalism among Azerbaijanis. Piety does not make a Muslim a radical.

If an extreme Islamist faction did exist, it would not have to be large to be dangerous. Two factors could make it more dangerous. First, discontent born of poverty or injustice feeds radicalism. Despite oil wealth and the modernization of Baku, lingering economic, social and political inequality contribute to Azerbaijan’s vulnerability to Islamist appeals. Outside central Baku, poverty is evident. People with Soviet-era educations cannot take advantage of jobs in new industries and often cannot provide better education for their children.

How many are affected? What are their alternatives? Is there an emerging middle class, as the regime insists? Data on these matters are not sufficient or sufficiently reliable to draw a definitive conclusion. Bribery is endemic, and citizens report pressure to give bribes even to get low-level jobs. A perception that the regime is corrupt and unjust can push the populace toward a traditional pole of morality, religion. Radical leaders could take advantage of such a climate, and Azerbaijan’s ruling circles are missing opportunities to address these problems.

Second, a regime that quashes open discussion and even mild dissent is cutting off peaceful discourse and thereby fostering extremism. Recent years have been marked by increasing government repression including the marginalization of the genuinely democratic opposition parties. Their offices and publications have been pushed out of the city center or shut down. Election rallies have been blocked. Parliamentary elections of 2010, which were deemed by international observers to be neither free nor fair, led to the complete exclusion of opposition parties from the National Assembly. With the failure of the democratic opposition to protect itself, much less effect needed change, popular interest in Islamist groups cannot be ruled out.

Nor are there other means for peaceful redress of grievances. Independent human rights activists, journalists and bloggers have been harassed, beaten, and arrested. This summer so many human rights activists were arrested that one account characterized the list as a “who’s who” of important civil society figures. Particularly shocking are the beatings and torture of activists in jail, most recently Leyla Yunus, a petite and diabetic woman with an international reputation. NGOs including scholarly organizations have had bank accounts frozen and offices raided and closed. Critical reports from Amnesty International, Freedom House, the OSCE and other groups are dismissed by officials in Baku as “anti-Azerbaijani.”

The regime stresses its security requirements, its need to maintain independence, especially against Russia, and defend against terrorists. These are real challenges. But it’s hard to see how election monitors, human rights groups, and bloggers threaten Azerbaijan’s independence.

Nor is religious extremism the only potential danger. Kurdish autonomy is being considered a tool to contain ISIL and the “treatment” here may be as volatile as the disease. Few Western analysts have explored the broader implications of Kurdish autonomy and certainly not for the south Caucasus. Such an arrangement for Iraq’s Kurds not only affects Turkey’s Kurds, as all have conceded, but could lead also to comparable demands by Iran’s Kurds living in the northwest of that country bordering Iraq. As a frequently oppressed ethnic and sectarian minority (Kurds are mostly Sunni) Iranian Kurds might find autonomy flimsy and press for secession. Secession movements, an urgent topic despite the outcome of Scotland’s referendum, affect each state of the south Caucasus.

All demands for secession are used by Armenians to bolster arguments for the self-proclaimed republic in Nagorno-Karabagh, in Soviet times an autonomous region inside Azerbaijan populated mainly by Armenians. Since the 1994 cease fire to a 6-year war, Armenian forces have occupied that area and surrounding regions totaling about 17% of Azerbaijan’s territory. Azerbaijan has rejected the secession-as-self-determination demand on the basis of preserving its territorial integrity.

Here Azerbaijan must be wary of Russian meddling since Moscow has both a military and more recently commercial treaty with Armenia.  Azerbaijan’s major ally is NATO-member Turkey that is itself on guard against both Kurdish and Armenian territorial claims. Renewed fighting over Nagorno-Karabagh could turn into a truly ugly regional conflict.

Neighboring Georgia likewise resists demands of ethnic minorities that are supported by Russia. Both of Georgia’s secessionist regions, Abkhazia and South Ossetia have Russian support, including the invasion of Georgia in “defense” of the Ossetians in 2008. Russian President Vladimir Putin’s revanchism early this year in Ukraine affirmed that Russia can with impunity seize the territory of a neighboring sovereign state using the pretext of claims to protect ethnic Russians. Neither Georgia nor any other state of the south Caucasus has a significant Russian minority but Russia has already claimed to protect Ossetians and may well do the same for its Armenian allies or others. Secretary of Defense Hagel’s trip to Tbilisi after the September NATO meeting, reflected this linkage by discussing Georgia’s entry into NATO.

Nor is the impact of secession confined to the states of the south Caucasus. Even the whiff of secession from Iran’s Kurds could, Tehran surely fears, inspire a similar demand from the neighboring Turkic population of Iran’s east Azerbaijan and Ardebil provinces. The movement for reunification of Iranian (“southern”) Azerbaijan with northern (now independent) Azerbaijan has been simmering since the Soviet collapse. It is encouraged by groups and individuals in the north. The vigorous support for the movement by Azerbaijan’s first post-Soviet president Abulfez Elchibey was a particular point of contention between Baku and Tehran. Iran stands to be hurt by secessionist movements in its northwest, and paradoxically, it is all that stands between a possible IS drive from Mosul to Baku.

Neighboring Russia and the Middle East, the entire south Caucasus is vulnerable to events in both. The potential autonomy or secession of the Kurds affects each of the three states, though differently – Georgia and Azerbaijan stand to lose territory from successful secessions bids while Armenia stands to gain. Similarly, Russia, which has just used the secession-by-self-determination card in Ukraine /Crimea can throw its weight on the same side of that argument to weaken Georgia and Azerbaijan and support Armenia. Indeed, of the various threats. Russian meddling is perhaps the greatest for the region and especially for Georgia and Azerbaijan. But the danger of Islamic extremism cannot be clearly assessed without more realistic information from Azerbaijan. The attraction of radicalism itself could be reduced if the Aliyev government were to establish and protect civil society.