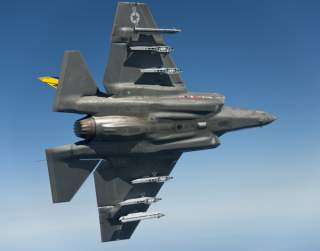 Demonstrating that the Osprey is able refuel the stealthy new jump-jet is crucial to ensuring that the Marines will be able to execute their distributed operations concept for the F-35B. While initial tests are being conducted on the ground, future tests will see the MV-22 refuel the F-35B in the air.

“This was the first time an MV-22 has refueled an F-35. Both ground refueling and air-to-air refueling are important pieces to the Marine Corps' MAGTF [Marine Air-Ground Task Force] operational construct,” Marine Corps. Maj. Adam Geitner, pilot and VMX-22 F-35 Detachment Aircraft Maintenance officer, said in a statement. “From a tactical point of view, the MV-22 to F-35 ground refueling allows the Marine Corps to employ assets in austere environments on a short notice without having to rely on long-term planning and fixed facilities.”

The Marines will test the MV-22’s ability to refuel the F-35B in the air at a later date. If successful, it would afford the U.S. Navy’s amphibious assault ships an organic aerial refueling capability—effectively giving those vessels capabilities similar to a full-sized aircraft carrier. “The next step will be air-to-air refueling from an MV-22,” Geitner said. “This is even more significant for the MAGTF when operating F-35s from [amphibious assault ships] because it provides organic air-to-air refueling capability that vastly extends the range of the aircraft and also provides operational flexibility.”

The MV-22 Osprey carries about 12,000lbs of internal fuel. In its tanker configuration, it can carry an additional 10,000lbs of fuel, which the MV-22 can off-load to other aircraft like the F-35B during ground or air-to-air refueling. Until the Osprey received a roll-on/roll-off aerial refueling kit, the Marines were limited to using either their own land-based Lockheed Martin KC-130J Hercules tankers or Air Force tankers like the Boeing KC-135 or KC-10. Those shore-based tankers are limited in their ability to support blue water operations or when the Marines are operating in regions where access to land-based air facilities is limited. “With the MV-22 being on the ship, co-located with the F-35, all of those constraints with the KC-130 no longer apply,” Geitner said.

However, a number of Marine Corps sources indicated that they were skeptical of the utility of the MV-22 in the tanker role. They pointed out that the MV-22 does not carry enough fuel to be an effective tanker for a thirsty aircraft like the F-35B. Indeed, by some estimates, the Osprey could only off-load about 15 minutes of additional fuel to an aircraft like the F-35—where even the short-ranged B-model carries about 13,000lbs of fuel internally.