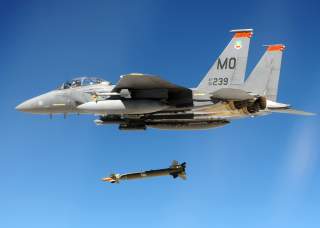 North Korea considers and a recent Twitter comment from President Donald Trump to effectively be a declaration of war against Pyongyang. As such, the Kim regime says that it will retaliate—potentially even engaging U.S. Air Force bombers flying around the Korean peninsula over international waters.

Ri was referring to a Trump’s tweet on September 23 where he suggested that North Korea might no longer exist in the near future. “Just heard Foreign Minister of North Korea speak at U.N. If he echoes thoughts of Little Rocket Man, they won't be around much longer!” Trump said.

It is possible that Pyongyang finds recent U.S. bomber overflights near the Korean peninsula to be a prelude to a potential decapitation strike. Indeed, over the weekend, the United States flew Rockwell International B-1B Lancer strategic bombers over international waters of the east coast of North Korea.

“This is the farthest north of the Demilitarized Zone (DMZ) any U.S. fighter or bomber aircraft have flown off North Korea’s coast in the 21st century, underscoring the seriousness with which we take the DPRK’s reckless behavior,” the Pentagon’s chief spokeswoman Dana White said in a statement. “This mission is a demonstration of U.S. resolve and a clear message that the President has many military options to defeat any threat. North Korea’s weapons program is a grave threat to the Asia-Pacific region and the entire international community. We are prepared to use the full range of military capabilities to defend the U.S. homeland and our allies.”

The State Department and the White House are adamant that Trump’s tweet was not a declaration of war. “We have not declared war on North Korea,” White House spokeswoman Sarah Sanders told reporters earlier today. “Frankly, the suggestion of that is absurd."

Nonetheless, Trump’s statements seem to have been taken seriously in Pyongyang and there is every possibility that the Kim regime will seriously attempt to shoot down either an American bomber or potentially a reconnaissance aircraft. However, that being said, Pyongyang has limited means to do so.

The North Korean air force only has a handful of relatively modern fighters including the early versions of the Soviet Mikoyan MiG-29 Fulcrum and the MiG-23 Flogger that could threaten American warplanes. Neither are likely to be able to get close enough to a B-1B, Boeing B-52 or a Northrop Grumman B-2 Spirit stealth bomber before being unceremoniously blown out of the sky by American fighter escorts. The only chance the North Korean air force would have of successfully engaging American bombers is if by chance they caught those aircraft without U.S. or allied fighter cover.

How Good Is North Korea's Army?

North Korea would have a better chance at shooting down a bomber with a surface-to-air missile battery if the American aircraft were close enough. While the overwhelming majority of North Korean air defenses are older Soviet systems, Pyongyang does field some surprisingly capable indigenous weapons.

“They have a mix of old Soviet SAMs [surface-to-air missiles], including the S-75, S-125, S-200 and Kvadrat, which are likely in more or less good condition,” Vasily Kashin, a senior fellow at the Center for Comprehensive European and International Studies at Moscow’s Higher School of Economics told The National Interest earlier this year. “They used to produce the S-75 themselves—and those could have received some significant upgrades. In addition to them, since early the 2010s they are fielding an indigenous modern SAM system which is called KN-06 by South Korea and the U.S.”

The North Korean threat cannot be dismissed out of hand. Pyongyang has shot down American military aircraft in the past—and gotten away with it. One such event took place on April 15, 1969, during the Nixon Administration, when a U.S. Navy Lockheed EC-121 Warning Star reconnaissance aircraft killing all 31 crew members onboard. President Richard Nixon ultimately did not retaliate but he did briefly consider a nuclear strike in response to the North Korean provocation.

"When I got to see the colonel, it was very simple. He described the shooting down of the EC-121 about a hundred miles at sea. And that he had a message, which he showed me at that time, saying to prepare to strike my target," Bruce Charles, a former U.S. Air Force McDonnell Douglas F-4 Phantom II pilot on temporary duty that day at Kunsan Air Base at the time told NPR. Charles’ F-4 was primed for launch carrying a 330KT B61 tactical thermonuclear bomb. “"The order to stand down was just about dusk, and it was not a certainty. The colonel said, 'It looks like from the messages I'm getting, we will not do this today. I do not know about tomorrow.’"

On December 18, 1994, North Korea shot down an unarmed U.S. Army OH-58 Kiowa reconnaissance helicopter over the demilitarized zone killing one pilot and capturing another. The Clinton Administration—realizing that there were no good options for retaliation—chose restraint.

But North Korea hasn’t just attacked American aircraft in the past; it has also attacked U.S. Navy vessels. On January 23, 1968, the North Koreans seized the U.S. Navy surveillance ship USS Pueblo—killing one sailor and capturing 83 others. The ship remains in North Korean hands, but the crew was eventually released on December 23, 1968. President Lyndon B. Johnson considered a host of retaliatory measures—including a nuclear strike—but ultimately backed down.

It is unclear how the current administration will react—but the situation is seems to only becoming even more unstable.