Could North Korea Use Its Russian MiG-29 Fighters to Take Down a U.S. Bomber? 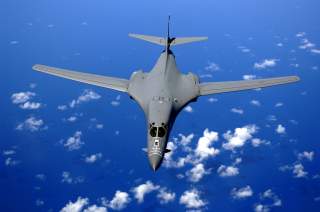 With war on the Korean peninsula looking more imminent every day as leaders on both sides up the ante, the question arises if Pyongyang will make good on its threat to try to shoot down American bombers operating in the vicinity of North Korea. If Pyongyang does make such an attempt, its best options are probably long-range surface-to-air missile systems such as the KN-06, but another possibility is that Kim regime might try to make use of its Mikoyan MiG-29 Fulcrum fleet.

The MiG-29 is North Korea’s most formidable and modern aircraft, but Pyongyang has only a handful of jets. The MiG-29 was one of the Soviet Union’s most capable fighters before its 1991 collapse, but it was far from an ideal aircraft. While the MiG-29 was fast, powerful and was exceptionally agile, its Achilles’ heel was its very short operating radius—roughly 450 miles for optimum profiles to as little a 250 miles—and poor radar, with export variants receiving less sophisticated avionics than those airframes destined for the Soviet air forces.

The basic problem for the Soviet Union during the 1970s—when the Fulcrum was developed—was that its electronics industry could not initially deliver a radar small enough to fit into the MiG-29 airframe with the performance that they wanted in the time they had available. Thus, though the Soviets had intended to fit the MiG-29 with a planar array radar similar in concept to what might be found on a F-16 or F/A-18, Moscow had to resort to reusing a derivative of the MiG-23ML’s twist Cassegrain antenna Sapfir-23ML radar. As such, the resulting NO19E pulse-Doppler radar had many limitations. To make matters worse, Central Intelligence Agency spy Adolf Tolkachev badly compromised the jet from the outset by leaking its design to the United States.

The North Korean MiG-29’s NO19EB non-Warsaw Pact export radar—downgraded from the set found on Soviet-owned jets—has poor ranges and offers very limited situational awareness for the pilot. However, the MiG-29 is also equipped with the ОEPrNK-29E infra-red search and track system, which gives it some additional sensor capability. However, like most Soviet aircraft, the MiG-29 is designed to be used in conjunction with ground controllers. The pilot mostly steers the aircraft into position based on instructions from ground radar operators, thus the lack of onboard sensor capability was not a huge detriment under the Soviet concept of operations.

Where the original MiG-29 shines is in close range within visual range fights. The Soviets equipped the Fulcrum with the Shchel-3UM-1 helmet-mounted cuing system, which—coupled with the R-73 Archer high off-boresight missile—makes the MiG-29 a formidable opponent in a dogfight. The extremely agile Fulcrum—which has outstanding low-speed handling coupled with a very high thrust to weight ratio—would routinely defeat U.S. and allied F-15Cs, F-16s and F/A-18s during training exercises in the 1990s thanks to its helmet-mounted cuing system.

But those were German-owned MiG-29s flown by expert Luftwaffe pilots in the days before the advent of the Raytheon AIM-9X Sidewinder and Joint Helmet Mounted Cuing System. These days, NATO-operated MiG-29s don’t rack up lopped-sided kill ratios in training as they once did—it’s a much more even fight. But given a skilled pilot and some luck, the MiG-29s can still win at close ranges.

The North Korean pilots are not nearly the equals of NATO pilots. Kim regime’s pilots receive only a handful of flying hours per year. Thus, they are not particularly proficient. But one doesn’t always need to be good; sometimes luck makes a huge difference. If by some happenstance a North Korean MiG-29 closes into range with a U.S. bomber or reconnaissance aircraft—which has happened in the past—and provokes a confrontation with U.S. fighters, the Fulcrum is still dangerous.

The North Koreans have roughly 30 MiG-29s in their inventory, but no more than about a dozen have been seen at once at the same time. However, despite the poor condition of the aircraft and the lack of aircrew training, the North Korean fighter force should not be dismissed outright. Even a broken clock shows the right time twice a day.