Could Russia and America Accidently Go to War in Syria? 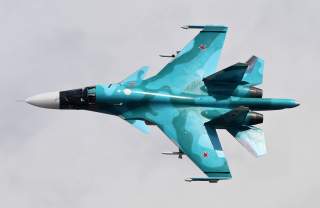 With American, Russian, Syrian government, Syrian rebels, Iranian forces, Turkish forces, ISIS and others operating in the close confines of Syria, there is a real possibility that a miscalculation or error might lead to a wider conflict.

Indeed, one only needs to look to a recent confrontation between U.S. forces and the Syrian regime in eastern Ghouta to see the potential danger. In the ensuing battle, U.S. forces killed approximately 100 regime fighters. While there were no Russian forces present at the battle, there is always a danger that there might be an inadvertent confrontation if both sides are not careful.

The Pentagon points out that the United States and Russia maintain a deconfliction line to ensure that American forces and the Kremlin’s don’t come into direct contact.

“The deconfliction communication line with Russia is constantly used,” defense secretary James Mattis told reporters on Feb. 11. “We keep each other informed. The Russians profess that they were not aware when we called about that force that had crossed, and it came closer. They were notified when the firing began. That's when we heard there were no Russians there. And we go out of our way to ensure that we do not endanger the Russians, as you know.”

Mattis took pains to emphasize that deconfliction is not the same as coordination.

“We do deconfliciton,” Mattis said. “We don't do coordination with the Russians. We do deconfliction. Because we have a deconfliction line, it doesn't need a lot of coordination, if you see what I mean, until someone decides they're going to come across the line. And we're OK with that in places where they need to go after ISIS, and they need to go—and they're taking fire from the other side of the river, hey, we'll coordinate to make sure that we have nobody there.  And what they do is up to them.”

However, American forces will not hesitate to defend themselves with lethal force when they come under attack. But in the case of the Ghouta confrontation—it is unclear why the Syrians would attempt to attack U.S. forces. However, in any conflict, the fog of war is ever present—and that might be one of the reasons the Syrians undertook such foolhardy action.

“When we took them under fire, that's when they began the indirect fire, the artillery fire,” Mattis said.

“We went after them. And to us, no, it's not a concern right now. We're watching it. Why do I say it's not a concern? We're quite capable of rebuffing them. It's perplexing why they would do it.  They have nothing to gain by fighting us. There's ISIS to be fought. It doesn't make sense, and I think that's probably why the Russians, too, at least appear to be perplexed by it.”

While the fog of war may have contributed to the incident, U.S. forces are committed to holding the territory gained by the Syrian Democratic Forces—even if that means confrontation with other groups.

“What we are going to do is hold that territory and get it back in local leaders hands,” Mattis said.

“Use Steffan de Mistura's Geneva Process to come up with a post-conflict map and post-conflict plan for the way ahead, and assure that ISIS 2.0 doesn't rise in the middle of all of that, and derail everything we're fought for, and many people have paid the price on this thing.  We don't simply up and leave when most of the caliphate's done, before the caliphate's really finished, and leave the diplomats without a leg to stand on against people who have no diplomatic inclination.”

Given the situation, one can only hope that Syria does spiral further out of control.