Could Russia and Japan Finally Settle Their Island Dispute? 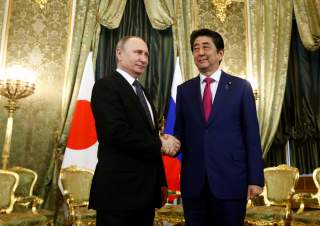 Russia and Japan are moving towards a rapprochement after a long period of mutual antipathy. In recent days, Moscow and Tokyo have started to discuss increased cooperation in the naval arena. And, in time, there could be a settlement between the two powers over the Kuril Islands, which came under Soviet jurisdiction after the end of the Second World War, but which Japan wants returned.

“The countries are ready to enhance cooperation between defense departments on the basis of high-level agreements reached over the last year,” Russia’s chief of the general staff, Gen. Valery Gerasimov said during his visit to Tokyo to meet his Japanese counterpart Adm. Katsutoshi Kawano.

The Russians and Japanese will hold more than 30 joint exercises during the coming year, according to the Russian Defense Ministry. But cooperation between Russia and Japan is not limited to just the military realm, the Kremlin might be attempting to reach a more comprehensive deal with Tokyo that could eventually see the dispute over the Kuril Islands finally resolved.

“We had a strategic dialogue with Japan before the Ukrainian crisis (defense and foreign ministers), but now it is being renewed,” Vasily Kashin, a senior fellow at the Center for Comprehensive European and International Studies at Moscow’s Higher School of Economics told The National Interest. “It is a part of a general rapprochement with Japan. There are real hopes to resolve the territorial issues in the coming years and at the same time there are efforts to boost economic cooperation.”

There are ongoing negotiations between Russia and Japan on the status of the Kurils to finally resolving the dispute. “There are hopes for this,” Kashin said. “Maybe they might fail, but for now, they are trying seriously, I mean both sides. But the negotiations are being kept secret.”

One possible outcome is that Russia returns the Kurils Islands to Japan in return for greatly expanded economic and technological cooperation, but on the condition that no U.S. forces ever set foot on those territories. The Russians have learned the lessons of history where Soviet leader Mikhail Gorbachev withdrew from Eastern Europe without securing a written guarantee that NATO would not expand into those regions to fill the void. “The disputed territory—part or all of it—would be transferred to Japan with some limitations,” Kashin said. “One of them is that there should be no U.S. military presence on the territory transferred by Russia, ever.”

That condition, however, is a sticking point for Tokyo, which fears that accepting such a deal would undermine its alliance with the United States. “That is a problem —the Japanese fear that this undermines their alliance with the U.S. and the U.S. will in this case exclude Senkaku from the alliance obligations,” Kashin said.

Another problem that both Moscow and Tokyo face—despite the fact that the Kurils Islands are tiny and comparatively minor territories—is that there are entrenched nationalists on both sides who are opposed to any compromise. Which is why the Kremlin and Tokyo are keeping negotiations secret. “In general the negotiations are kept secret, so the nationalist elements from both sides cannot intervene,” Kashin said.