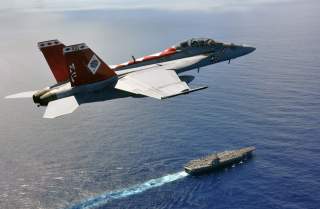 In development by Boeing for several years, the CFT effort involves engineering two new 3,500 gallon fuel tanks aligned along the contours of the aircraft to decrease the overall weight of the fighters and increase the payload or weapons capacity, Boeing developers have told Warrior Maven.

While the F-18 is not a stealth aircraft, the conformal shape of the fuel tanks also slightly contributes to stealthy characteristics of the fighter, making it slightly less observable to enemy radar or reducing what’s called the “radar signature.”

The CFTs will allow the Super Hornet to carry, and therefore deliver, more bombs for attack because the platform will be lighter and carry less drag, developers said.

The service recently awarded Boeing a $219 million deal to produce the CFTs for the newest upgraded Super Hornets Block III – to emerge in the 2020s.

According to Boeing developers, The CFTs can add 120 nautical miles to a strike mission and allow for longer time on station by about 25 to 30 minutes.

Also, Boeing officials explained that the CFT’s provide substantial value to the EA-18G Growlers because the reduced drag afforded by the new tanks creates much less drag for the aircraft, allowing it to reach higher altitudes. Reaching higher altitude for an electronic warfare aircraft allows it to jam and identify signals from a much wider field of view, Gillian explained.

In addition, by the early 2020s the Growler will be configured with a new technology called the Next-Generation Jammer – a new jamming technology which will allow the electronic warfare platform to jam signals on more frequency and jam multiple signals at the same time.

The emerging Block III will build upon the current Block II configuration of the F/A-18 Super Hornet, which first deployed in 2008; Block II is engineered with a host of signature-reducing and endurance enhancing modifications compared to prior models of the aircraft.

Some of the enhancements include the use of Active Electronically Scanned Array, or AESA, radar, "jamming" decoys and an integrated electronic countermeasures system. The countermeasures system consists of three main components; they include and on-board jammer, visually cued radar warning receiver and a decoy, according to Navy officials.

Range extension is, without question, a defining element of the potential advantages offered by conformal fuel tanks, as it would enable Super Hornets to attack targets from farther at-sea distances. This would, among other things, potentially enable a carrier launched F/A-18 to fly toward and attack Chinese land-based air defenses while operating at off-shore distances less vulnerable to Chinese DF-21D long-range anti-ship missiles, called “carrier killers.”

Data from Naval Air Systems Command specifies the Super Hornet combat range at 1,275 nautical miles, a distance which roughly enables strikes from 500 miles away. Chinese carrier killer missiles are said to be able to strike carriers operating as far as 900 miles off shore.

While there is some debate as to the Chinese missiles ability to hit moving targets, and carrier strike groups are of course armed with an array of layered defenses, adding distance to a Super Hornet’s strike range could greatly impact the threat calculus.

In fact, this issue is at the heart of a very critical Navy effort to engineer a new carrier-launched re-fueler by the early to mid-2020s. The drone aircraft now in development, called the MQ-25 Stingray, could bring the promise of more than doubling the strike range of an F/A-18 or F-35C.