Could Syria Spark a Nuclear War Between Russia and America? 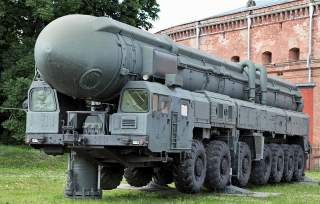 On April 6, 2017, the 100th anniversary of the United States entering World War I, American warships launched 59 Tomahawk cruise missiles at regime targets in Syria. The base that absorbed the attack, Al Shayrat air base in Homs province, houses both Russian and Syrian troops, who are allies in Syria’s bloody civil war.

It was a flawless military operation, popular with American politicians, media and the public. And it is a serious problem.

Much like the geopolitical environment in Europe preceding World War I, Syria is home to a complex web of alliances and support structures. More than a century ago, the assassination of an archduke in Bosnia ignited a chain reaction that saw two blocks of alliances explode into a devastating global world war. The realities in Syria are even more complex and the stakes have never been higher.

Among the myriad of opposing factions in Syria, there are two goliaths. Russia, allied with the Assad regime and provider of troops, warplanes and sophisticated equipment to the pro-Syrian effort — and the United States, which has sided firmly with rebel and Kurdish factions committed to Syrian president Bashar Al Assad’s ouster. Between them, they possess 94 percent of the world’s nuclear weapons.

It is in this environment that U.S. president Donald Trump’s missile strikes have brought us one step closer to a scenario in which two nuclear superpowers could engage in direct combat operations against each other.

U.S. commandos have been carrying out missions in Syria since at least 2014, and over the past year, the United States has been steadily ratcheting up its involvement in the Syrian civil war.

In March 2017, the U.S. role in Syria changed significantly with the introduction of a force of 400 U.S. Marines and Army Rangers to combat ISIS inside the Syrian border. These are not special operations forces but “regular” conventional troop formations operating inside a foreign, non-aligned nation without invitation.

According to Dan Lamothe and Thomas Gibbons-Neff in The Washington Post,

The deployment marks a new escalation in the U.S. war in Syria, and puts more conventional U.S. troops in the battle. Several hundred Special Operations troops have advised local forces there for months, but the Pentagon has mostly shied away from using conventional forces in Syria. The new mission comes as the Trump administration weighs a plan to help Syrian rebels take back Raqqa, the de facto capital of the Islamic State. The plan also includes more Special Operations troops and attack helicopters.

Perhaps even more concerning though, neither deployment was officially announced by the Pentagon. According to The New York Times, “the Rangers’ presence became apparent [only after] they were seen driving around the northern Syrian town of Manbij in Stryker vehicles and armored Humvees,” while The Washington Post was the first to break news of the Marines deployment.

This fits with Trump’s promise to stay unpredictable and not alert the enemy to his plans. But it is also a serious blow to the civil transparency of our military operations.

Keeping news of U.S. troop deployments in Syria from the Russians might sound good to Trump’s chest-thumping style of military planning, but it is vital that the Russians have at least a somewhat clear picture of where U.S. forces are operating.

If they don’t, the prospect of U.S.-Russian violence becomes very real.

Without proper channels of communication in place, it is entirely possible that U.S. and Russian forces could find themselves in a firefight. With both sides rapidly increasing their presence and commitment to the Syrian conflict, the situation could quickly escalate beyond either party’s control.

This is already happening. Hours after the strike, Russia announced that it is withdrawing from a 2015 memorandum that has significantly decreased the risk of in-flight incidents between U.S. and Russian aircraft operating in Syrian airspace. The Russian withdrawal comes as a direct result of the U.S. missile strikes on its ally, which Russia sees as a “grave violation of the memorandum.” The only reason that Russian troops weren’t killed in the attack on Al Shayrat is that the United States notified Russia in advance, using a hotline that was part of the now-defunct memorandum.

The danger should be readily apparent. With U.S. and Russian forces operating on opposing sides of a very contentious and complicated struggle, the risk of a catastrophic mishap is alarmingly high.

Consider this. In 2015 Turkey — a NATO ally — shot down a Russian warplane that had strayed into its airspace, sparking an international incident that strained Russian-Turkish relations to the breaking point. This past November, three Turkish soldiers were killed in an airstrike carried out by Syrian government forces while fighting ISIS militants and Kurdish rebels inside Syria.

Things could get much worse.

Following Trump’s missile strikes, Al Assad would be operating well within established international norms if he decided to retaliate against U.S. troops operating within his borders. If he were to bomb a U.S. Marine Corps firebase outside of Raqqa tomorrow, what does that mean for Russia and Iran, Al Assad’s allies?

According to a Russian spokesman, “Putin considers the American strikes against Syria an aggression against a sovereign government in violations of the norms of international law, and under a far-fetched pretext … Of course, Syria is our ally, considering that we are helping the Syrian armed forces at the Syrian leadership’s request.”

Imagine this scenario. Syrian forces, having been bombed by U.S. warships, respond by mortaring U.S. Marine firebases inside the Syrian border. The Marines call for air support to neutralize the Syrian attackers. Russian advisors are killed in the strikes and the Russians order a no-fly zone imposed.

Trump refuses to back down and continues to fly sorties in Syria. Russian fighters try to force U.S. Navy strike craft out of Syrian airspace under the no-fly order, and collide with one of the U.S. planes. Thinking they are under attack, U.S. pilots open fire.

Now you have a shooting war with Russia, and what happens next is anyone’s guess.

But with a combined active military stockpile of some 8,300 thermonuclear weapons, this is not a guessing game that anyone should want to play.

Official Russian military doctrine calls for the use of tactical nuclear weapons to control the escalation of a conventional conflict. In other words, if Russia finds itself in a fight that it can’t win, a real nuclear option is on the table. Some in the U.S. have mirrored this first-use strategy.

This is becoming a trend. Just this year, the Pentagon’s defense science board issued a report urging, “the president to consider altering existing and planned U.S. armaments to achieve a greater number of lower-yield weapons that could provide a ‘tailored nuclear option for limited use.’” But those weapons already exist, and some are already deployed in theater.

These weapons go beyond deterrence. These are weapons that are tailored for use on a battlefield. And they are right next-door.

In 1914 Europe’s monarchs thought they understood battlefield strategy. They quickly lost control of the situation, resulting in a war that lasted 4 years and killed close to 20 million people.

Miscalculating in Syria could have far greater consequences.

Geoff Wilson is a policy associate at The Ploughshares Fund, where he focuses on U.S. nuclear and military strategy, and is a co-editor of the report “Ten Big Nuclear Ideas for the Next President.” Will Saetren is the author of Ghosts of the Cold War: Rethinking the Need for a New Cruise Missile, and is an alumnus of the Roger L. Hale Fellowship at The Ploughshares Fund.