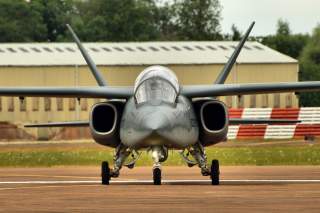 Together with the company’s Beechcraft AT-6 turboprop light attack plane, the two aircraft will be Textron’s entrants into what could become a lucrative contract for as many as 300 machines by 2022 if the OA-X experiment is transitioned into an acquisitions program.

For Textron, the stakes are high, if the OA-X experiment results in an Air Force purchase of the Scorpion, it would open the door to foreign customers buying the low-cost jet. If not, the Scorpion—which was developed with Textron’s own money—could be cosigned to the trash bin of history.

While some potential international customers wanted to see a production version of Scorpion—which has now completed development—others are waiting on the outcome of the OA-X experiment.

“Some are kind of watching and waiting to see a little bit what happens with the Air Force experimentation program and others continue to have more specific discussions with us around when they want to come over, when they want to fly the aircraft and are laying in some cases their own plans and budgets in place for the program,” Textron chief executive officer Scott Donnelly told investors during an earnings call on July 19.

“We really are very focused on experimentation program because I think that not only the will the U.S. Air Force get a good read on the capability of the platform, but I think a number of our perspective international customers are likewise on watching to see how the programs goes.”

The OA-X experiment will start in August for the Scorpion using a production version of the light combat jet. The Air Force has told the company that its evaluation will be extremely rigorous.

“They don’t have a specific criteria or pass, fail, they just – they want to see what the aircraft are capable off. Obviously, you have things like Scorpion and then AT-6 which are both very, very capable platforms, very different in terms of their performance envelope and they want to see what each of those aircraft can do as well as A-29, which we expect is also in there.”

The OA-X is an experiment at this point, but factors such as the Senate Armed Services Committee adding $1.2 billion in funding to purchase such as aircraft to the fiscal year 2018 budget bode well for the effort. Indeed, Donnelly expressed confidence that an acquisitions program might emerge.

“I think the chief and a lot of very senior people Air Force have been articulating the need for a platform like this. And they feel that it’s important to the Air Force to have the capability like this, but it would be hard for them I think even on an unfunded list to advocate for something that they haven’t flown and seen demonstrated,” Donnelly said.

“So I think that their interest and desire on the program and certainly as you know the Senate Armed Services for instance saying what we have recognized this is a need and we want to put budget authority in there for it.”

There is a potential market for the OA-X in the foreign market—Saudi Arabia is one such potential customer.

“In terms of the Saudi budget item around OA-X, obviously this is one of the customers that we are in discussions with, but these are early on discussions,” Donnelly said.

“There are certainly a number of things that we are looking at, but we think that now the performance envelope, the capability of what Scorpion can do makes it a very viable product for what their requirement is, but it’s still in its formative stages I would say.”

Overall, Textron seems satisfied by the Air Force’s management of the OA-X experiment.

“I think the Air Force is being pragmatic about the fact that they need to execute experimentation program, understand what the capability is of the platforms that they are looking at and then take their next step, whatever that might be,” Donnelly said.