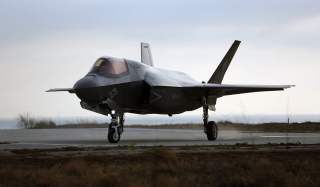 With the U.S. Marine Corps set to deploy its F-35B Joint Strike Fighter to U.S. Central Command’s (CENTCOM) area of responsibility (AOR), Lockheed Martin’s stealthy new jump jet could make its combat debut over the Middle East as tensions ratchet up over Syria. Over the coming days, the United States could initiate hostilities with the Assad regime over a chemical weapons attack Damascus allegedly perpetuated in Douma earlier this month.

The F-35B is set to make its first combat deployment aboard the amphibious assault ship USS Essex as part of the 13th Marine Expeditionary Unit, which will soon head towards the Middle East. “Today is a big deal not only for CENTCOM but for the Marine Corps,” Lt Col. Jaime Macias, Chief of Plans at Marine Corps Forces Central Command, said in a statement on April 4. “This is the newest and most-lethal aircraft that the Joint Force has, and the fact that it’s coming into the CENTCOM theater and potentially seeing some combat operations is a big deal.”

Given the presence of Russian forces in Syria equipped with potent area air defense systems including the powerful S-300V4 and the S-400, the F-35’s stealth and sensors could be particularly useful during combat operations over Syria. “What the F-35B gives you is multi–role capabilities, so now you have one aircraft that can do a broad range of capabilities and do it to a level that none of the legacy aircraft have been able to do to this day,” Macias said.

Particularly useful will be the F-35’s potent sensor suite, which will be essential to ensure that U.S. forces do not accidentally engage Russia military forces—which could lead to a much wider and much more dangerous war. “The F-35B is more than just an aircraft,” Macias said. “It’s a system of systems that’s flying; its got sensors and anti-axis aerial denial capabilities.”

The Threat of War

The threat of war is very real. In recent days President Donald Trump has all but stated that he intends to attack Syria—and has openly and publicly taunted Russia in the process. “Russia vows to shoot down any and all missiles fired at Syria,” Trump tweeted on April 11. “Get ready Russia, because they will be coming, nice and new and ‘smart!’ You shouldn’t be partners with a Gas Killing Animal who kills his people and enjoys it!”

Russia’s ambassador to the United Nations Vassily Nebenzia urged the United States to show restraint. “We hope that there will be no point of no return — that the U.S. and their allies will refrain from military action against a sovereign state,” Nebenzia said according to the Washington Post.

Escalation in the event of a U.S. strike on Syria is a worry for U.S. Secretary of Defense James Mattis too. “On a strategic level, it's how do we keep this from escalating out of control, uh, if you get my drift on that,” Mattis told the House Armed Services Committee on April 12.

Is Trump Trying to De-escalate?

Meanwhile, Trump said that despite his April 11 tweet, military action may or may not be imminent. “Never said when an attack on Syria would take place. Could be very soon or not so soon at all!” Trump tweeted on April 12.“In any event, the United States, under my Administration, has done a great job of ridding the region of ISIS. Where is our ‘Thank you America?’”

With his latest tweet, Trump has given his administration some breathing room. Indeed, as Mattis told the House Armed Services Committee on April 12, military action against Syria “is not yet in the offing.”

Where is the Evidence?

Moreover, the United States does not have direct evidence of the chemical attack or who perpetuated it. “I cannot tell you that we have evidence, even though we have a lot of media and social media indicators that either chlorine or sarin was used," Mattis said.

Mattis seemed to indicate that the United States is holding off on an attack until there is proper verification of claims made by the Syrian rebels. “I believe there was a chemical attack. We're looking for the actual evidence," Mattis said. "The OPCW (Organization for the Prohibition of Chemical Weapons) is the organization for the chemical weapons convention—we're trying to get those inspectors in probably within the week. You know the challenges we face where Russia has six times in the U.N. rejected and made certain that we could not get investigators in.”

Indeed, the president himself seemed to indicate that he is backing away from his earlier threats and is taking a longer more reasoned look at the situation. “We’re having a meeting today on Syria. We’re having a number of meetings today. We’ll see what happens. We’re obviously looking at that very closely,” Trump said on April 12. “And I will be leaving here. I was there, and now I’ll be going back as soon as this meeting is over. But we’re looking very, very seriously, very closely at that whole situation. And we’ll see what happens, folks. We’ll see what happens. It’s too bad that the world puts us in a position like that. But, you know, as I said this morning, we’ve done a great job with ISIS. We have just absolutely decimated ISIS. But now we have to make some further decisions, so they’ll be made fairly soon.”

If War Does Come…

If the President does make the decision to strike, the United States will likely use cruise missiles—launched from the Ohio-class guided missile submarine USS Georgia—and stealth aircraft such the Northrop Grumman B-2, Lockheed Martin F-22 Raptor and the F-35 Joint Strike Fighter to hit Syrian targets while avoiding harm to Russian forces. While the B-2 can strike from U.S. stateside bases, the F-22s would likely operate out of Al Udeid Air base in Qatar where some number of those fighters are deployed. A military option would also afford the Marine Corps an opportunity to prove the F-35B in combat, which the service seems to be spoiling to do.