Could the Navy Turn the Littoral Combat Ship into a Swarm 'Aircraft Carrier'? 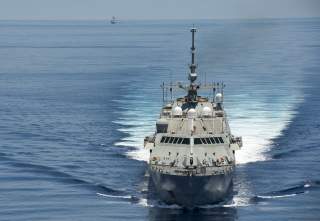 The Navy is broadening its strategic and technical coordination between its Littoral Combat Ship (LCS) and surface and undersea drones to better destroy mines, survey enemy waters and even launch attacks.

For instance, while facing long-range enemy precision weapons, surface ships like the LCS will launch and control swarms of fast, high-tech surface drone ships to test enemy defenses or launch coordinated attacks without putting a host ship in range of enemy fire.

While ocean drones are rapidly gaining advanced levels of autonomy through new computer algorithms, Navy strategy emphasizes that humans will of course still be needed to fire weapons, perform command and control and make many combat-relevant decisions.

"As part of the expanding shipbuilding portfolio, the Navy expects to have USVs (unmanned surface vessels) play a large, critical role working in concert with manned systems. Just like UUVs [unmanned underwater vehicles] will not replace submarines, we do not envision USVs replacing manned surface combatants. But they will work in concert," Alan Baribeau, spokesman for Naval Sea Systems Command, told Warrior.

The Navy plans to deploy fast, high-tech surface drones equipped with advanced wireless technology able to find, attack and ultimately destroy underwater enemy mines, all while operating at safe distances from a larger manned surface host ship such as an LCS.

While unmanned surface ships are not yet operating with weapons on board, industry and Navy developers are looking at ways to integrate guns, lasers, enemy fire interceptors or even small missiles with surface drones - to of course be controlled by human operators. Current Pentagon doctrine specifies that, when it comes to the prospect of using lethal force, a human must always be "in the loop" making the decision - regardless of how quickly autonomy is progressing.

Overall, this strategic shift, aimed at keeping pace with undersea and surface warfare threats, is reflected in a recent name change for the Navy's Program Executive Office, LCS. The PEO is now called Unmanned and Small Combatants (USC), a service statement said.

"Littoral Combat Ships no longer capture the entirety of what we do. The shipbuilding portfolio has expanded to include four surface combatant product lines -- two variants of LCS, plus Frigate, plus MMSC [Multi-Mission Surface Combatant]," Baribeau said.

Expanding the purview of the PEO is reflected in the recently submitted Navy budget proposal, which calls for an influx of $1.2 billion for mine-countermeasure technologies over the next five years.

Baribeau added that the strategic expansion is due, in large measure, to ongoing efforts to build upon manned-unmanned teaming technologies. This includes coordinated unmanned and manned surface ship and drone real-time information sharing between host ships and a range of supporting assets.

Building upon these efforts, the Navy is planning for the MCM USV to incorporate an ability to "destroy" mines from USVs as well. Neutralizing mines, once they are found, is the aim of this longer-term Navy effort, service developers explained.

The current exploration of mine-neutralization technology is happening alongside the ongoing integration of advanced sonar mine-hunting payloads onto the USV -- the AQS-20 and AQS-24, officials said.

Incremental steps forward with surface drone countermine technology, an emphasis woven into the PEO LCS expansion, are also unfolding within the Navy's fast-progressing "ghost fleet" project. This is an ongoing Navy strategic and technical effort to harness the latest computer algorithms to deploy groups of interconnected unmanned vessels able to perform missions in a synchronized fashion.

A human at a control station, using a low bandwidth connection, can perform command and control functions without needing to actually drive the vessels.

The Navy and ONR are already immersed in the development of a variety of USVs, including a mine-detecting Unmanned Influence Sweep System, or UISS, for the Littoral Combat Ship. The UISS is carried by a Textron-developed Common Unmanned Surface Vehicle, or CUSV.

The CUSV, in development since before 2009, can travel for more than 20-hours carrying up to 4,000-pounds at speeds of up to 20-knots, Textron information states. Also, it is engineered to withstand waves up to 20-feet.

Other applications include the possible use of aerial swarms, for instance, could detect an enemy surface vessel and relay information to unmanned surface vessels or undersea drones. All of this could operate in a combat circumstance while needing little or no human intervention.

Algorithms governing autonomous maritime navigation have progressed to the point where USVs can more effectively “perceive” and respond to their surrounding environment while in transit, program managers with the Office of Navel Research have explained. Small, high-tech autonomy kits can be integrated onto unmanned surface vessels.

The kits, called Control Architecture for Robotic Agent Command and Sensing, or CARACaS, are engineered to provide USVs with an ability to handle dynamic operational situations; this can include the execution of search patterns, harbor defenses, surveillance or even swarm boat attacks, Navy developers have explained. Other possibilities among a wide range of uses include using autonomous USVs for supply and weapons transport, countermine operations, electronic warfare and amphibious operations.