Could the South China Sea Spark the Deadliest Conflict of Our Time? 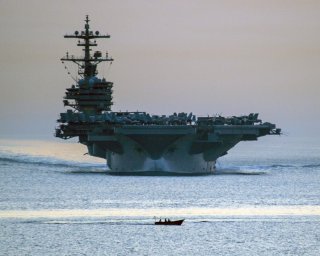 In his undergraduate years the U.S. Defense Secretary, Ashton Carter, did a double major in Medieval History and Physics. It was perfect preparation for Asia today—arcane and complex history speaking directly to modern mysteries.

At the 14th Asia Security Summit in Singapore,  the Shangri-La dialogue, Carter was two-thirds of the way through his text before he got to any substantive discussion of China or the South China Sea. It was like those medieval theological debates where the Devil was a major factor in discussion, even if it wasn’t named.

The Physics discipline came through in Carter’s comments on China’s construction surge in the South China Sea. The Law of Cause and Effect says all actions have consequences, and during questions Carter observed that if China “doesn’t stop, one of the consequences will be the continuing coalescing of concerned nations around the region and around the world.”

What Physics calls the observer effect is also in play—observation and measurement of systems can influence the system. In the South China Sea, Carter noted, the region was “observing a new fact which is not an American fact but a Chinese fact.” Enter Heisenberg’s uncertainty principle—or at least the growing sense of uncertainty.

Carter said China’s creation of “massive outposts” on reefs in the South China Sea had gone “much farther and much faster” than any other claimant:

China has reclaimed over 2,000 acres, more than all other claimants combined – and more than in the entire history of the region. And China did so in only the last 18 months. It is unclear how much farther China will go. That is why this stretch of water has become the source of tension in the region and front-page news around the world.

The United States is deeply concerned about the pace and scope of land reclamation in the South China Sea, the prospect of further militarization, as well as the potential for these activities to increase the risk of miscalculation or conflict among claimant states.

Along with the call for an immediate and lasting end to reclamation, Carter affirmed the U.S. intention to protect freedom of navigation and overflight in the region:

There should be no mistake: the United States will fly, sail, and operate wherever international law allows, as US forces do all around the world. America, alongside its allies and partners in the regional architecture, will not be deterred from exercising these rights – the rights of all nations. After all, turning an underwater rock into an airfield simply does not afford the rights of sovereignty or permit restrictions on international air or maritime transit.

Four of the six questions directed at Carter after his speech were about China and the South China Sea (and one of the others was about the rebalance and the Trans Pacific Partnership). Among the posers: if the U.S. is being clear and firm in its declaration, yet China keeps building, what did that say about US relevance and effectiveness? How could the region deal with China’s “low-intensity provocation”? How much strategic adjustment would the U.S. have to make to deal with China’s rise?

The response-as-question from a PLA Colonel was mild compared to the bombast China has served up in recent years at Shangri-La. The tradition is established. The U.S. Defense Secretary gives the first speech on the first morning and delivers the China report card; the Chinese delegation then get angry. Serious stuff spiced by verbal biffo.

Senior Colonel Zhou Xiaozhuo said Ashton’s critique was “groundless and not constructive.” “Freedom of navigation in the South China Sea is not at all an issue because the freedom has never been affected,” Zhou said. China’s actions were “legitimate, reasonable and justified.”

In the way the game is played at Shangri-La—a gaggle of Defense Ministers all frantically doing bilaterals in parallel with the conference—the Chinese have been snarky at their low ranking in the speaking hierarchy in formal conference sessions. The pushback from the International Institute for Strategic Studies is that if China’s Defense Minister turns up—he’s come only once since Shangri-La started in 2002—he’ll get a big slot on the podium.

The first parts of Carter’s speech could be taken as a detailed response to questions about U.S. relevance. That was where the History side of Carter’s studies at Yale kicked in. There was the faintest touch of the High Middle Ages explanation, as Carter lauded the way trade and technology had transformed Asia’s economies: “miracle after miracle has occurred.” And central to Asia’s age of miracles has been the U.S., building and protecting Asia’s system, enlarging the role of other players through “a shared regional architecture.”

From Singapore, the Defense Secretary goes to Vietnam to sign a Joint Vision Statement that “for the first time commits both the United States and Vietnam to greater operational cooperation.” Then, Carter flies to India to sign the new U.S.–India Defense Framework to “guide military cooperation for the next decade.”

The announceable from the speech was what Carter called a new Southeast Asia Maritime Security Initiative, where up to US$425 million would be spent to build maritime capacity.

Maritime security is certainly at the forefront of Asia’s mind. As is the way a reef can be transformed into an airfield—a strange meeting of history and science.