Could the U.S. Army Lose a War to Russia or China's New Tanks? 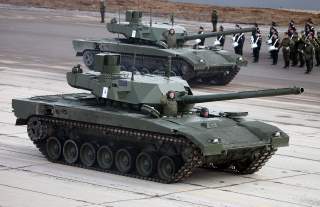 Tanks are back in vogue.

Russia unveiled its new T-14 Armata tank in 2014, the first new tank-type produced since the fall of the Soviet Union. It’s set to enter service in 2020, but production issues mean that Russia will still rely on its older T-90 tanks for now. Meanwhile, China continues to modernise its huge 7,000-tank fleet (of which only around 2,000 are modern) with the introduction of the latest version of its ZTZ-96 main battle tank (MBT), the ZTZ-96B, last year. Those modernisation efforts now render the US Army’s M1 Abrams MBT, introduced in 1980, the oldest modern MBT in service in a major power. With other militaries’ tanks reaching ‘parity’ with the Abrams, the US has now begun the process of designing its replacement.

Having suffered more than a decade of financial and political turbulence, Russia is now embarking on a major revitalisation of its land forces. The T-14 is just one of the projects it’s developing as it aims to replace all of its armoured fighting vehicle types with completely new, modern forms. The T-14 continues to use Russia’s standard 125 mm gun but the turret design seems capable of accommodating a gun of up to 152 mm. Notably, its main weapon is fed by an auto-loader in the turret, which is uniquely completely crewless. Protecting the tank is the new ‘Afghanit’ active protection system, which, aside from defending against missiles and rocket-propelled grenades, is allegedly able to protect against modern kinetic rounds such as the latest M829A4 depleted uranium sabots used by the US Army.

The ZTZ-96 MBTs are slated to make up the bulk of China’s tank modernisation program. They’re equipped with a 125 mm main gun and are protected by a combination of composite and explosive reactive armour (ERA) similar to the ‘Kontakt-5’ system used on Russian T-90s. China’s current strategy seems to be to continue to replace older tanks with the T-96, particularly its latest 96B variant, rather than increase production of the more expensive but more advanced T-99s. While less radical than Russia’s design overhaul, it represents a serious modernisation effort, especially given the size of China’s tank army.

The venerable M1 Abrams tank probably remains the most dominant MBT, although it’s now showing its age. The Abrams wields a highly accurate and ammunition-flexible 120 mm gun and is protected by the ‘Chobham’ composite armour, which proved capable of withstanding multiple rocket-propelled grenades and older Russian anti-tank missiles during the first Gulf War. The urban terrain of the Iraq War led to the ‘TUSK’ upgrades to the Abrams, giving it remote weapons systems, better belly armour, and ERA on the sides. The most recent round of upgrades has replaced the wiring and added new networks to the tanks, but the US military is now pushing the limits of what can be done with the Abrams. The tank’s main problem is its weight; at more than 70 tonnes, it’s one of the heaviest MBTs in service. Australia recently found that to be an issue when it discovered that the tanks were too heavy for the landing craft assigned to the new Canberra-class helicopter landing docks.

Repeated US Army attempts to replace the Abrams were cut due to cost blowouts, and the latest major update for the M1, the M1A3, failed to materialise. The most recent attempt, the next-generation combat vehicle, remains in the conceptual stage, and is primarily aimed at replacing the Bradley fighting vehicle, not the Abrams. The Abrams is currently slated for upgrades in around 2022, which have been deemed more cost-effective than trying to develop a full replacement.

Australia’s fleet of M1A1 Abrams has kept pace with the American upgrades, most recently with a series of upgrades meant to extend the platform’s life to 2035. The Plan Beersheba reforms divided the Abrams fleet between the three combat brigades as part of an ‘armoured cavalry regiment’. That has maximised their combined arms potential, as the tanks can better practise and deploy with other army elements. But the small number of tanks in each regiment means that they are too few to carry out effective armoured warfare against enemy tanks or an independent breakthrough role against enemy lines. To remedy that, the goal is to increase the fleet from 59 tanks to 90, as well as provide a number of support vehicles based on the Abrams chassis.

In recent years, US Army Abrams have seen more action in infantry support against insurgents, menaced by infantry anti-tank missiles and IEDs rather than enemy tanks. From Australia’s perspective, it’s not clear whether or where we’d deploy our Abrams in a traditional armoured warfare role, especially considering that we’ve never deployed the current fleet at all. A more likely role is support for Australian infantry against unconventional enemies, rather than slugging it out on the Eurasian steppe. If that’s the case, does Australia need another Abrams-style tank, or should we be looking at other armoured vehicles that are better suited for infantry support? The advance of Russian and Chinese armoured initiatives notwithstanding, Australia needs to begin looking at the future of the Abrams, and probing America’s plans for it, with an eye for a lighter and more flexible armoured platform.