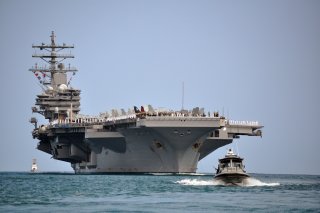 State-of-the-art weapons such as shipboard lasers are touted as lethal ways to counter the barrages of cruise and ballistic missiles that China would be expected to fire at the US Navy in time of war. However, they have inherent technical limitations and aren’t fail-proof.

But an updated report by the Congressional Research Service (CRS) noted, among other things, that laser beams follow a straight path and cannot hit over-the-horizon targets masked by the curvature of the earth. Their effective range can also be reduced by atmospheric factors such as dust and turbulence, says the CRS, which provides background reports to US legislators on key issues.

What is more, individual lasers, at current capabilities, can only attack one target at a time, require several seconds to disable each one, and would have trouble defending against a saturation attack involving many Chinese missiles.

The scenario likewise involves nail-biting, close-quarters combat for any US ship warding off a Chinese missile strike. While Hollywood depicts laser weapons leisurely zapping targets at long ranges, the report noted that current SSLs would have to obliterate their targets at short distances of about a mile or two.

Eric Wertheim, a US naval weapons expert, says the challenge will be compounded if adversaries use decoy missiles or faster hypersonic missiles against defending ships.

“(China’s) DF-21D is just one in a very large array of anti-ship missiles that can be used,” Wertheim, the author of the Naval Institute Guide to Combat Fleets of the World told Asia Times.

Like electromagnetic railguns (EMRGs) and hypervelocity projectiles (HVPs), naval lasers are years from actually engaging advanced missiles of the type that China or others would use against the US fleet. Another major technical hurdle is perfecting onboard power sources sufficient to sustain such lasers in combat.

Any SSLs deployed by the US Navy in the near term will also be limited to destroying small boats and unmanned aerial vehicles (UAVs), rather than missiles.

The Navy has had an operational Laser Weapon System or LaWS aboard the USS Ponce, an Austin-class amphibious ship, since August 2014. The system has been successfully tested against target boats and drones in the Persian Gulf. But operational lasers won’t be mounted on other Navy surface ships until FY2020 or FY2021.

Doug Tsuruoka is Editor-at-Large of Asia Times, where this first appeared.