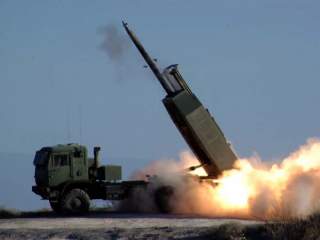 “Imagine this. An F-18 Hornet acquires a target at sea, an enemy ship, and then passes the track data through Link-16 to any potential shooter with the right munitions and within range of the enemy ship. That information is passed through a gateway to several potential shooters on land such as the Paladin or High-Mobility Artillery Rocket System, or HIMARS.”  -- Adm. Harry Harris, Pacific Commander.

The above quote, spoken by Adm. Harris, Commander of U.S. Pacific Command, refers to the fast-increasing emphasis upon using air, land and sea weapons and technology through faster, more lethal networking and coordination.

While posited at a theoretical prospect, Harris explained that this kind of “cross-domain” fires has already been demonstrated and is now gaining momentum within senior Pentagon circles.

“That enables tactical data messages to be transmitted long distances, over the internet, effectively extending the range of the Link-16. Because of the internet, JREAP-C tracking data can then be passed The JREAP-C “cloud” is necessary because Link-16 is already over-subscribed,” Harris explained.  “The Paladin or HIMARS then kills that enemy ship from the land.”

While Harris, a high-level Navy admiral, made these remarks recently at the LANPAC Symposium 2016: “Role of Land Forces in Ensuring Access To Shared Domains,” the sea-service is closely coordinating the strategy, tactics and approaches of cross-domain fires with the Army and Air Force, senior officials explained.

This instance demonstrates a significant example of the inverse scenario from the Gulf War wherein stealth bombers and fighter aircraft were used to destroy Iraqi Air defenses, clearing the way for a ground invasion.

The Navy is also developing longer-range precision rounds to fire from the 5-inch guns on surface ships, further enhancing its ability to destroy enemy targets on land; one such possibility under consideration is a maritime variant of the GPS-guided 155m round known as Excalibur.