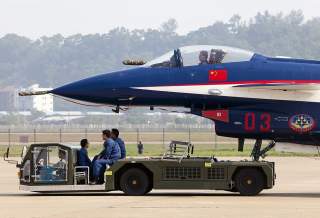 On the morning of Nov. 12, J-10 fighters from China’s prestigious Ba Yi Air Demonstration Team practiced maneuvers over Yutian county, northeast of the city of Tianjin.

Sitting in the instructor’s seat of one of the delta-wing J-10s was Capt. Yu Xu, a flight leader and one of four women pilots trained to operate the domestically-designed multi-role fighter. The 30-year-old native of Chongzhou, Sichuan province, had earned the nickname “Golden Peacock” after a traditional dance she had performed while a cadet.

Around 9:45 a.m., observers on the ground reported seeing two aircraft collide. Yu and her co-pilot Li ejected. Their stricken J-10 plunged into a farming field near the village of Dangyupan, Hebei province, leaving a crater 10 meters wide in its wake. Li parachuted to the surface and was treated for minor injuries to the arm and leg.

Yu was killed when her parachute struck the wing of the other J-10. Searchers found the engines and black box of her plane, and her remains sometime later. Her ashes were recently prepared for interment in her hometown.

The tragic accident caused an outpouring of national grief for the pioneering pilot. The air force officially declared Yu a national martyr.

Inevitably, observers in China and abroad have questioned whether the accident reflected deficiencies in the J-10, pilot training or even in the choice to deploy women fighter pilots in the first place. Beijing’s habit of remaining cagey about the causes of military accidents has intensified the speculation.

However, it is not even clear whether Yu was controlling the two-seater J-10 at the time of the accident.

Yu was not the first Chinese female military pilot, either, nor the only one qualified to fly fighter planes, including the J-10. In fact, the history of Chinese women in military aviation dates back more than 60 years — and spans several countries.

Refused entry into the Chinese nationalist air force during it early resistance against Japanese invasion, she instead became an airline pilot. During World War II she enlisted in the United States’ Women’s Airforce Service Pilots, or WASPs, technically a civilian organization under military command which ferried aircraft to units ready for deployment overseas.

Lee was killed in November 1944 when another plane struck her P-63 on the landing field and burst into flames. She was survived by another Chinese-American WASP, Maggie Gee. Thirty-five years later, Congress granted the WASPs military status.

When the Communist Party acceded to power in China in 1949, its rhetoric favored gender equality, typified by Mao Zedong’s famous statement that “women hold up half the sky.”

The party banned traditional customs such as polygamy and foot-binding, and many women rose to leadership positions at the local level. In 1952, the People’s Liberation Army Air Force graduated its first class of 55 female flight crew, including 17 pilots as well as flight engineers and navigators.

This cohort performed an aerial fly-by of Tiananmen Square before Mao in six Li-2 transports, Russian-built copies of the C-47. When China detonated its first atomic bomb on Oct. 16, 1964, an Li-2 piloted by Fu Lan and other women from the second cohort flew through the mushroom cloud twice to collect air samples

Yet recruitment of additional female cohorts occurred irregularly every five to eight years. The PLAAF assigned female air crew to a single unit, the 38th Regiment of the 13th Air Division in the Guangzhou military region, where they flew Li-2, Y-7, Y-8 and Il-76 transports on charter flights, disaster relief missions and cloud-seeding operations intended to instigate rainfall.

At first, the PLAAF forbade women assigned to the unit from marrying for 10 years after enlistment. Eventually, however, many of the female flight crew married fellow pilots in the unit. Today, a mother and daughter serve in the 38th Regiment.

By 1987, the Chinese air force had only trained 208 female flight crew, all for non-combat aircraft. Six years later, the U.S. military, which opened pilot training to women in the mid-1970s, certified its first female combat pilots.

Taiwan’s air force, which clashed repeatedly with PLAAF fighter planes in the 1950s, also graduated its first five women pilots in 1993. Three have gone on to pilot F-5 Freedom Fighters, while others have served in maritime patrol and transport units, including Lt. Col. Chen Yueh-Fang, commander of the 439th Wing of C-130 Hercules transports.

It wasn’t until the eighth cohort in 2005 that the PLAAF sought to train female combat pilots, selecting 35 candidates out of 200,000 applicants. Sixteen made it through the four-year training program involving 116 different tests. The graduates ranged from 21 to 24 years old and included one member of the Hui minority.

Unlike previous generations which trained to operate cargo planes, the eighth cohort did their advanced training on JL-8 jet trainers, with which they performed a fly-by for the 2010 Spring Festival Gala.

Six women from the cohort went on to fly JH-7 fighter-bombers, and another four conducted an additional year of training to fly Z-9 utility and attack helicopters.

Four pilots — Yu Xu, Sheng Yifei, He Xiaoli and Tao Jiali — trained on J-7 fighters before transitioning to China’s most modern home-designed jet fighter in service, the Chengdu J-10. The J-7 is a Chinese-built version of the ubiquitous MiG-21, itself a ’50s-era design.

The single-engine J-10 “Vigorous Dragon” is a fourth-generation multi-role fighter resembling the U.S. F-16 Fighting Falcon in many respects, up to the prominent air scoop under the fuselage.

Unlike the Falcon, however, the J-10 features canard wings next to the nose for added maneuverability, but lacks horizontal tail stabilizers. Thus, the J-10 relies upon computerized fly-by-wire systems to steady its aerodynamically unstable airframe.

“When I first flew the J-10, there were a lot of corrections to my flying, as my arms weren’t strong enough,” remarked He Xiaoli during an interview with state-owned CCTV.

“I then realized that flying a fighter jet requires not only superb technique but also physical strength. I did a lot of physical training to build up my arms. It made it easier to fly a smooth formation with male pilots later on.”

The four women earned their certification for the J-10 on July 29, 2012 and performed in their first international airshow in Malaysia in 2015. The members of the squadron paraded in green flight suits and sun glasses to reenact a famous scene from Top Gun.

The following year the four pilots flew over a parade in Tiananmen Square commemorating the 70th anniversary of the end of World War II. Just a few weeks before the accident, Yu performed in the Air China 2016 airshow in Zhuhai city.

There remains confusion as to what caused the Nov. 12. accident. If the past is anything to go by, the Chinese government will likely keep the accident investigation classified.

Some observers point to the high accident rate of the J-10, at least six of which have crashed between 2014 and 2016. Failure of the Russian-built AL-31 engines accounted for a few of the crashes, and a birdstrike another — but other incidents remain unclear.

Afterwards, Chinese female pilots varied from 100 to 225 flight hours per year, while the U.S. Air Force aims for 100 to 120 flight hours a year for fighter pilots. But a greater problem may not be the number of flight hours, but a lack of realistic combat training and over-reliance on ground controllers.

Radio Free Asia, a long-time critic of the Chinese Communist Party, has leveled an accusation from an anonymous source that the women in the Ba Yi Air Demonstration Team were admitted for political reasons without having achieved the requisite number of flight hours.

A 2015 China Daily article stated the women pilots had an average of 800 hours of flying time upon entering, while a minimum of 1,000 hours is typical for most members of the Ba Yi team. For comparison, the U.S. Air Force Thunderbirds require 1,000 hours and the Navy and Marine’s Blue angels team requires 1,250 flight hours.

However, both the Thunderbirds and the Blue Angels have lost five aircraft in accidents since the year 2000, including two crashes this June. The maneuvers performed by aerobatic teams are demanding and dangerous, and no team is immune to mishaps.

In any event, not only is it unclear whether pilot error was at fault for Yu’s death — but even if it was, which of the pilots between the two aircraft made the error? The standard J-10 is a single-seat fighter, but Yu was flying in the backseat of a J-10SY two-seater designed to accommodate an instructor and trainee.