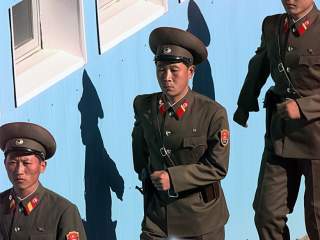 North Korea’s recent nuclear and missile tests have certainly shocked the world and triggered a cascade of stern responses.

South Korean President Park Geun-hye stood up to Chinese pressure and economic blackmail by moving forward to improve her country’s defenses by deploying important American missile defenses—Terminal High Altitude Area Defense, or what is commonly referred to as THAAD. She also finally pulled the plug on the inter-Korean venture at Kaesong which had utterly failed in its political objectives to induce North Korean reform and moderate the regime’s aggressive behavior.

Prime Minister Shinzo Abe imposed unilateral Japanese sanctions, many of which had been previously lifted in earlier attempts at diplomatic engagement with Pyongyang.

The U.S. Senate voted 96-0 after the House of Representatives voted 418-2 in favor of additional punitive measures on North Korea.

Pundits and experts overwhelmingly jumped on board the sanctions train even though many had to abandon the baggage of their previous derision of sanctions and futile advocacy for meaningful dialogue with the recalcitrant regime.

The above is certainly an impressive, breathtaking array of bipartisan—no supra-partisan, supra-ideological unanimity of the need for a resolute response to North Korea’s unending violation of UN resolutions, U.S. and international law, and the norms of international behavior.

But who’s missing from this list of resolute, principled leaders? President Barack Obama.

Sure, the Administration has condemned Pyongyang's actions in the strongest possible words, expressed its dismay and disgruntlement, and requested Beijing do more. But where is the action backing up the strong rhetoric? Where is the rigor in enforcing American laws and principles? Indeed, where is the leadership?

Let’s review in more detail what others have done. I admit a great deal of earlier frustration with President Park Geun-hye’s foreign policies to date. Her myopic focus on history issues with Japan prevented needed focus on threats of the current millennium. Playing to Korean nationalism prevented policies that could have enhanced allied cooperation and improved South Korean defenses. Park’s eager outreach to China came at the expense of hypocritically embracing a country that had failed to apologize for South Korean casualties and devastation in the 1950s while eschewing a summit with Japan over history issues.

However, Park’s agreement with Japan on comfort women in December and decisions on THAAD and Kaesong this week were decisive, bold and simply the right thing to do. Mea culpa Madame President. Park correctly, if belatedly, rebuffed China’s arm-twisting, economic threats and misguided mischaracterizations that THAAD would double as a deterrent aimed at China.

President Park’s move on Kaesong was equally dynamic and ran counter to advice she was still receiving from bureaucrats within her ministries. There has been a backlash from progressive factions that ending South Korea’s involvement in the Kaesong fiasco was severing the last elements of inter-Korean dialogue. But realizing that getting repeatedly kneed in the groin is not “dialogue” is the first step toward recovery. And what dialogue? Pyongyang rebuffed/derailed numerous attempts at engagement, killed and maimed South Koreans, threatened Seoul and insulted President Park with the most vile, sexist diatribes.

The U.S. Congress, frustrated by the timid incrementalism of the Obama Administration, overwhelmingly approved the North Korea Sanctions and Policy Enhancement Act. The legislation closes loopholes, adds measures and strengthens potential responses. But Congressional insistence in some sections of the text to make enforcement of U.S. laws mandatory rather than discretionary is revealing and damning of Obama’s approach. While implementing new sanctions measures is important, fully implementing and enforcing already existing far-reaching measures is as important, if not more critical.

President Obama has been hitting the snooze bar on North Korean sanctions. For years, the Obama Administration has vowed that it is contemplating additional sanctions but did little. By pulling our legal punches but always promising to be tougher “the next time,” Washington squandered the opportunity to more effectively impede progress on North Korea’s nuclear and missile programs and coerce compliance with U.N. resolutions.

The collective international finger-wagging and promises to be tougher the next time have allowed North Korea additional years to develop and refine its nuclear weapons and the means to deliver them. Pyongyang feels that its own strategic patience policy can outlast that of the United States.

The U.S. needs to sharpen the choices for North Korea by raising the risk and cost for those violating laws and resolutions as well as for those who have been willing so far to facilitate North Korea’s prohibited programs and illicit activities.

Bruce Klingner, a senior research fellow for Northeast Asia at The Heritage Foundation's Asian Studies Center, spent twenty years in the intelligence community working at the CIA and Defense Intelligence Agency. You can follow him on Twitter: @BruceKlingner.