Debt: The Next Ukraine Disaster? 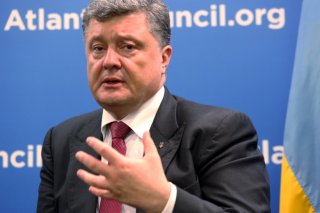 After months of standoff, the Ukraine government appears to be making halting progress towards an agreement restructuring its external private debt. On hopes of a deal, and ahead of an IMF Board meeting next week to review its program, the government reportedly has decided that it will make a $120 million payment to creditors due tomorrow. It is possible that decision to repay will be seen as a signal of good faith and create momentum towards an agreement, but I fear it’s more likely we have reached a point where continuing to pay has become counterproductive to a deal. Absent more material signs of progress in coming weeks, there is a strong case—on economic, political and strategic grounds—that a decision to halt payments and declare a moratorium gives Ukraine the best chance of achieving an agreement that creates the conditions for sustainable debt and a growing economy in the medium term.

The move to restructure followed the announcement earlier this year that the IMF had made a debt operation a condition of its lending. The IMF decision, as in Greece, was justified by reference to a debt sustainability analysis showing debt rising above 100 percent. A comprehensive restructuring, including a 40 percent haircut to the nominal value of the debt, was seen as needed to reduce debt to a sustainable level (a target of 71 percent). But the timing of the decision had more to do with financing, the result of inadequate bilateral assistance from Ukraine’s main partners that left a gap that was too large for the IMF to fill. The restructuring targets cash flow relief of $15.3 billion over the next four years.

Since the spring, talks have moved forward in fits and starts, and while there have been a flurry of meetings this month, significant differences remain. Most contentious appears to be the call for upfront nominal principal haircuts. Creditors rightly note that, given the extraordinary unknowns associated with the war with Russia, the size of the relief needed is uncertain and there is a case for a two-stage approach, with cash flow relief now and a subsequent restructuring discussion when there is more certainty on the economic and political future of Ukraine.  Indeed, IMF research in recent years has made a compelling case for “reprofiling” when there is significant uncertainty, albeit in cases (unlike this one) where the good outcome does not require a subsequent restructuring. But the Ukraine government, and the international community more generally, are united in their belief that there are significant benefits to a comprehensive debt deal that includes haircuts. Among the benefits are assured financing and a strong political signal to the population that there is light at the end of the tunnel. If, however, creditors doubt their resolve, or hope for much smaller levels of haircuts, and creditors are receiving payments in the interim, the negotiation becomes a game of chicken, difficult to conclude.

That seems to be where we are now. This morning, there were reports that the two sides would not meet as scheduled this week, allowing technical talks to continue but suggestive of a lack of progress in recent days.  A September amortization payment of $500 million appears to be a harder deadline for the negotiations, as the government has clearly stated that it has neither the will nor the resources to make that payment.  So unless a deal is concluded soon, a moratorium is likely, if not now, in September.

To be clear, a moratorium cannot be an excuse to not reach an agreement.  The form of the agreement can vary–there have been suggestions that interest rates could step up after a period of time; that the government could provide extra payments if the economy grows (although GDP warrants traditionally haven’t performed well in markets raising questions whether the government will get good value for them); or that there could be a menu of choices that included different combinations of debt relief.  All these ideas deserve examination.

Markets appear to be betting on a deal, or at least on there being sufficient progress toward a deal to justify continued payment (see chart). Prices this morning were steady at around $0.55 on the dollar, up around 6 cents on the month.

The case for a moratorium

Debt policy is always trying to find a balance on the issue of default. There needs to be strong incentives for countries to try and repay their debt, even at times of stress; otherwise risk premium will soar and financing for essential development needs will be squeezed out in non-crisis periods. From this perspective, Ukraine was right to make an extraordinary effort up to this point to remain current on its debt.

But, when a restructuring becomes necessary, it cannot be too hard to get it done, and there needs to be strong formal and informal mechanisms for collective action to ensure the broadest possible participation. Continuing to pay while negotiations proceed can be an act of good faith; but it can also allow reserves and fiscal resources to drain to unnecessarily low levels. In that context, paying until the last minute provides little additional benefit to market access and if continued payment is seen as coming at the expense of those who are restructuring later—could in fact complicate the negotiations. Far more important for the government is the reduced debt and financing uncertainty, ahead of fall elections and a difficult effort to raise new bilateral financing for 2016.

The announcement of a moratorium will no doubt bring down prices, and it is often argued that it will delay Ukraine’s return to market.  Unfortunately, international bond market access is a distant hope for Ukraine in the current environment. Imposing a debt moratorium would imply a default (after a 10-day grace period) and trigger cross-default clauses on Ukraine’s other eurobonds.  But the default would be cured when the restructuring is completed.

The IMF is scheduled to complete its first review of its Extended Fund Facility (EFF) arrangement with Ukraine next week, following passage of legislation including banking and judicial reform. To complete the review, the Fund’s Board will need to waive the usual requirements of assured financing (as the restructuring is not complete) and that is more easily justified absent arrears. But that should not be a reason for delay, if Ukraine is acting in good faith and committed to negotiating a fair deal. The Fund should not be willing to lend indefinitely in the presence of arrears, but should be willing to do so now if it helps get a deal done.

The government’s main concern with announcing a moratorium may be that anti-Ukrainian elements could seek to capitalize on the default, comparing Ukraine’s actions to the crisis in Greece for example. Any default can create domestic concerns about financial stability, and a bank run at this point would be damaging. Still, these concerns should be manageable. In this regard, the international community needs to provide a strong message of support for the government’s action, emphasizing the importance of an agreement and the significance of this step towards a solution, not an intensification, of the economic crisis facing Ukraine.