Decades-Old Security Council Resolutions Are Holding Israeli-Palestinian Peace Back. It's Time for Something New. 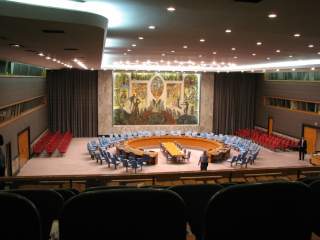 When Secretary Kerry’s anticipated failure to mediate an Israeli-Palestinian permanent status agreement resulted in a complete stalemate of the Israeli-Palestinian negotiations, it was clear it might have severe short and long-term repercussions. On the short term it led to a resumption of the cycle of violence and may threaten the survival of the Palestinian Authority. The kidnapping of three Israeli youth by a Palestinian terrorist group and the escalation that followed it, first in the West Bank and then in Gaza Strip, demonstrated this danger.

Hardly have the parties digested the failure of Secretary Kerry to mediate an Israeli-Palestinian agreement and the possible ramifications of a political stalemate, and here we are, engulfed in yet another round of violence between Israel and Hamas ending with a cease fire, which may prove shaky, as a first step towards a long-term stabilization of Gaza through its reconstruction and providing the population with a future perspective. In the short run it will help diminish the motivation of Hamas to renew fighting. In the longer run it could be a first step in a renewed attempt to relaunch the political process. In the wake of the latest round of escalation it should be clear to all parties that what was perceived to be a status quo is not tenable, even in the short run. On the long run the continuation of the status quo means a slide towards a binational state that will be neither Jewish nor democratic, while continuing to deny the Palestinian people the right to self-determination.

With no real changes in the basic positions of the two sides, it is difficult to assume that Secretary Kerry will succeed in restarting the negotiations between Israel and the PLO, and even if he were to succeed, there is no reason to believe that the next round of talks would be more successful. It leads to the conclusion that change of leadership in one or both sides is needed for real, results-oriented negotiations to take place, because it seems that even the recent bloodshed and suffering will not lead to the necessary change of heart among the current political leaderships.

Against this grim backdrop, the emphasis should be focused now on the short term on managing the crisis caused by the latest military round in Gaza and avoiding steps on the ground that might preempt a future agreement, such as expansion of the settlements project. For the longer term steps that will set the stage for renewed future negotiations between new leaderships are required. One of the steps that should be seriously considered by the international community (and the parties concerned) is passing a new UN Security Council resolution (different then the resolution that is discussed in the context of the Gaza ceasefire) that will reflect the changing reality since the passing of the last relevant resolution, and therefore, the need for a new reference. Until recently the talks between the two sides where based on two outdated UN Security Council resolutions, 242 and 338. The first one is from 1967 and the latter is from 1973. After more than twenty years of futile negotiations more detailed terms of reference that deal with the specific problems of this conflict are needed. Secretary Kerry tried to mediate an agreement between the two sides on such terms of reference in the form of a framework agreement, to no avail. The international community is the only one that can determine these terms of reference through a new UN Security Council resolution. It should be based on a US understanding of the nature of reasonable terms of reference drawn from the last two rounds of negotiations, during the premierships of Olmert and Netanyahu.

These terms of reference have to deal with the main subjects of the permanent status agreement; borders between the two states, security, Jerusalem, refugees and the finality of the agreement. It should also reflect the fact that although the parties did not succeed in concluding an agreement the gaps between, the positions of the two parties were narrowed down in important areas. They should enshrine some important principles of the permanent status agreement, such as basing the borders on the 1967 line with mutual equal swaps of territories, two capitals in Jerusalem, Israel and Palestine as the nation states of the Jewish people and the Palestinian people respectively, security arrangements that will include a nonmilitarized Palestinian state, and a mechanism for compensation to the Palestinian refugees and their rehabilitation.

There should be consideration of the UN chapter on which the resolution should be based. It seems that Chapter 6 that deals with “Pacific Settlement of Disputes” is suitable.

There is no doubt that the mere idea of introducing a new UN security council resolution, which will serve as a new basis for resolving the Israeli-Palestinian conflict, will be opposed by the parties concerned because the principles that will be included in the resolution will not fully reflect their positions. Key to such a step let alone to its success is the US. But the US alone should not lead that effort. It’s the Quartet (composed of the UN, EU, Russia and the US) that should take the lead in drafting the resolution, leading consultations with the parties concerned and the Arab states. Based on the consultations, a resolution should be put to a vote in the security council. As the saying goes, “If it ain’t broke, don’t fix it”. Since it’s broke, it is about time for the international community to set the stage for yet another attempt to resolve the Israeli-Palestinian conflict based on a new and realistic resolution. Some may argue that there are more pressing issues in the Middle East like the civil wars in Syria and Iraq, but there is no reason to believe that dealing with one of these pressing issues will be at the expense of the others. Eventually it is not possible to escape from the Israeli-Palestinian conflict, and an important side benefit of such a resolution might be also providing a stimulus for internal political changes in the two sides that will serve the purpose of resolving of this protracted conflict.