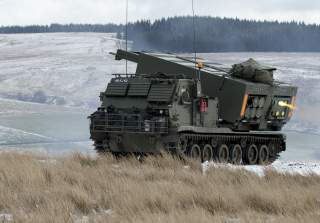 The United States Army has awarded Raytheon a contract to technologically mature and reduce risks on its DeepStrike missile system.

The company is developing the potent new weapon for the service’s Long-Range Precision Fires (LRPF) program. The contact is worth $116.4 million.

The U.S. Army’s LRPF program aims to develop a new surface-to-surface missile that can hit point land targets out to 499 kilometers to replace the existing Army Tactical Missile System. At those ranges, the new missile will be just below the threshold of weapons prohibited under the landmark Intermediate-Range Nuclear Forces Treaty (INF Treaty) that was signed in 1987, which many scholars and diplomats such as former U.S. ambassador to the Soviet Union, Jack Matlock, have argued marked the true end of the Cold War.

Raytheon's DeepStrike–can fire two missiles from a single weapons pod—reducing costs while increasing capacity. It also offers a 40 percent increase in range over the current ATMS.

"Raytheon can develop, test, and field this new capability and deliver it to the Army ahead of current expectations to replace aging weapons," Dr. Thomas Bussing, vice president of Raytheon's advanced missile systems product line, said in a statement.

"LRPF gives soldiers on the battlefield overmatch capability against adversaries."

Under the Army’s LRPF development program, the weapon’s technological maturation and risk-reduction phase includes testing missile components to ensure that the design is ready for engineering and manufacturing development and live-fire demonstrations by the end of 2019.

If DeepStrike proves to be successful, it will offer the U.S. Army a potent new capability that in some ways is America’s answer to the Russian Iskander-M ballistic missile.

The Russian weapon, which replaces the OTR-23 Oka—also known as the SS-23 Spider—that was banned under the INF Treaty, has been a thorn in NATO’s side. Russia regularly rotates the nuclear-capable weapon through its Kaliningrad exclave.