A Delicate Dance: China, Taiwan, America and the Sunflower Movement 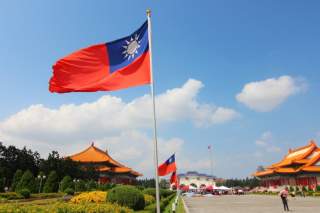 Editor's Note: The following is a "Letter to the Editor" from Thalia Lin, an Executive Officer in the Taipei Economic and Cultural Representative Office (TECRO) in the U.S.

To start, however, it is necessary to give credit where it’s due. As Professor Sutter indicates, the United States should authorize the sales of advanced weaponry that have long been requested by Taiwan’s government, as they are essential to maintain Taiwan’s self-defense capability. This is all in accordance with the Taiwan Relations Act, which celebrates its 35th anniversary this year and directs the U.S. “to provide Taiwan with arms of a defensive character.”

Where Professor Sutter misses the mark is his assessment that the United States should shift to “a more active U.S. posture in support of Taiwanese free expression and identity represented by the so-called Sunflower Movement on the island.” As Taiwan is a free country, its free expression and identity is represented in its robust democracy. It is Taiwan’s very system of government, so opposite of that of mainland China’s in every way, that allows and even embraces demonstrations such as the Sunflower Movement as an exercise of the spirit of the country.

The Sunflower Movement ended in peace, and the government has pledged to establish a supervisory mechanism to monitor cross-Strait agreements. However, students’ weeks-long occupation of the Legislative Yuan paralyzed the lawmaking process, preventing it from achieving anything concrete. This is why Assistant Secretary of State Daniel Russel, when answering a question about the protests during a hearing of the Senate Foreign Relations Committee in early April, stated that “the United States very much hopes that the students and demonstrators will use that freedom responsibly, that they will behave in a civil and in a peaceful manner and certainly to avoid violence.”

In any event, the Sunflower Movement is acting in opposition to the Cross-Strait Trade in Services Agreement, which is essential for securing Taiwan’s economic future. It is not about integrating with mainland China, as some would suggest, but rather liberalizing Taiwan’s economy in order to be a part of the region’s ongoing economic integration. Besides economic agreements with mainland China, Taiwan has also signed trade liberalization agreements with Singapore and New Zealand, both of which are taking part in Trans Pacific Partnership negotiations. Additionally, as South Korea is expected to sign a free-trade agreement with mainland China by the end of this year, Taiwan is facing increasing economic competition in the region. The trade in services agreement with mainland China is only a logical step toward making Taiwan a significantly more attractive prospect for the TPP and other critical regional and international trade agreements.

Professor Sutter writes that “China would face costly and difficult reevaluation of its reasonably successful policy toward Taiwan.” However, we must point out that President Ma’s policy toward mainland China has been reasonably successful and widely praised by U.S. government officials. In the same testimony mentioned above, Assistant Secretary of State Russel noted that “[the United States] very much welcome and applaud the extraordinary progress that has occurred in cross-Strait relations under the Ma administration.”