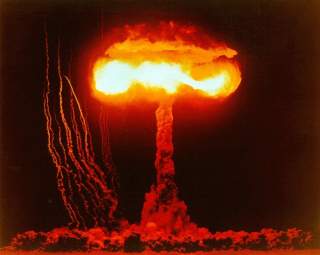 The conservative German daily Die Welt, well-known for its unflinching support for Israel, recently published an article stating “with near certainty” that the Federal Republic of Germany, or West Germany, helped finance Israel’s nuclear program in the 1960s.

According to the Welt report, in 1961 West Germany agreed to loan $500 million to Israel over ten years. Although the official purpose of this funding was said to be the development of the Negev Desert— where Israel’s Dimona nuclear reactor is located— it is widely suspected that the money was actually meant to finance Israel’s nuclear weapons program.

This top secret initiative was reportedly named “Aktion Geschäftsfreund,” which translates as “Operation Business Partner.” It bypassed both the Israeli cabinet and the German parliament, with the money being funneled through Kreditanstalt für Wiederaufbau, a West German-government owned development bank.

The Welt report comes after former Israeli President Shimon Peres (who was the head of Israel’s nuclear-weapons program at the time of its inception in the 1950s) denied that funding for Israel’s nukes came from Germany earlier this month.

The Welt article dismissed this denial, however, arguing that when it comes to German-Israeli cooperation on nuclear weapons, secret-keeping is part of the game. (Indeed, the practice—or art, rather—of secret-keeping with regards to sensitive matters of defense should be expected of any regime, nuclear or otherwise.)

Israel first began constructing a nuclear reactor in the Negev Desert near a town called Dimona in the 1950s. U.S. intel revealed the existence of the Dimona reactor in 1960 (although the U.S. knew of the reactor much sooner, new archival releases show). This prompted a statement by Prime Minister Ben Gurion that the reactor was purely for non-military purposes. Hardly anyone in the international community believed this was its true function.

Peres has stated that $40 million of Israeli government funding was going toward the Dimona reactor, but that this was only half of the amount necessary to complete the project. This prompted questions about where the other half of the money was coming from. Peres’ statement, according to Welt, is the only one that indicated that international donors contributed funds to the program (although it has since been revealed that some private American citizens helped fund the program).

The suspicion that West Germany was involved in financing Dimona first emerged when Ben Gurion made a background comment to an Israeli newspaper that a confrontation with Adenauer’s government would disrupt the development of Israel’s nuclear deterrent, which was integral to Israel’s security and the prevention of future wars.

Still, whatever the West German involvement was in Israel’s nuclear weapons acquisition, it is undeniable that France played the largest role of any foreign power. In 1957, following the Suez Crisis, Peres and representatives from France signed three confidential contracts that allowed France to establish a 24-megawatt heavy-water reactor in Israel, loan it 385 tonnes of natural uranium, work together with Israel on nuclear-weapons research and production and back the building of a processing plant for plutonium extraction. This came a year after Peres asked French defense minister Maurice Bourges-Maunoury: “What would you think if Israel were to establish its own potential for retaliation?”

Norway also provided Israel with 20 tons of heavy water, which was actually delivered by the United Kingdom.

Rebecca M. Miller is assistant editor and illustrator at The National Interest. You can find her on Twitter: @RebecMil.