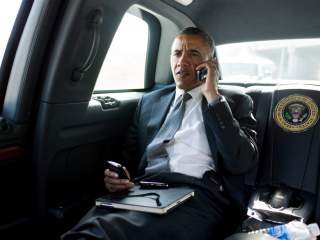 In a new interview with Yahoo, President Obama goes further than ever with his new Cuba policy—in essence giving an early announcement that he will visit Cuba next year. The inducement of sitting down with Fidel Castro is apparently too much to resist.

Final year travel to see bloody dictators has been a problem before, and Bill Clinton almost went to North Korea in 2000. He finally did visit in 2009—but not as president.

In this interview, Obama says “If I go on a visit, then part of the deal is that I get to talk to everybody.” This presumably means dissidents, the people whom his secretary of state ignored during his own visit to Cuba. But there are many ways of parsing what “everybody” means, and I would bet heavily against Obama demanding, much less getting, the right to sit down with all of Cuba’s leading, courageous, anti-regime dissidents. A tamer crowd can easily be assembled in some sort of compromise with the regime.

The president’s desire to get down there is clear, and it leads him to misrepresent what’s actually happened in Cuba since his new opening to the regime was announced last year. Consider this line in the Yahoo story:

"The president hopes that 'sometime next year' he and his top aides will see enough progress in Cuba that they can say that 'now would be a good time to shine a light on progress that’s been made, but also maybe (go) there to nudge the Cuban government in a new direction.'"

Shine a light? What progress has been made, exactly? On freedom of speech or of the press, zero. On holding a free election, and breaking the Communist Party’s monopoly on power, zero. Here’s the Washington Post’s assessment months after the new Obama policy was announced:

"In announcing the reopening of the U.S. Embassy in Havana, President Obama said “nobody expects Cuba to be transformed overnight” by his policy of “engagement.” That’s just as well because in the first six months of Mr. Obama’s normalization of relations with the Communist regime, most indicators of human rights on the island have moved in the wrong direction.

"Since December [2014], there have been more than 3,000 political detentions in Cuba, including 641 in May and 220 on Sunday alone, according to dissident sources. Most were accompanied by beatings; at least 20 detainees required medical treatment in May. After Cuba was invited for the first time to the Summit of the Americas in Panama, regime thugs attacked the civil society activists who also showed up."

In fact, the president announced his new policy a year ago this week. But last week on December 10, Human Rights Day, the regime arrested more than 150 dissidents. In the past year there have been a historically high number of political arrests, more than 8,000.

The president explained his thinking, or part of it, to Yahoo:

“'Our original theory on this was not that we were going to see immediate changes or loosening of the control of the Castro regime, but rather that over time you’d lay the predicates for substantial transformation,' he said. 'The more that they see the benefits of U.S. investment, the more that U.S. tourist dollars become woven into their economy, the more that telecommunications is opened up so that Cubans are getting information, unfettered by censorship, the more you’re laying the foundation for the bigger changes that are going to be coming over time,' he added."

This is utterly baseless in theory or fact. First, he assumes his deal with Castro is actually going to bring all those reforms, especially an end to censorship. So far the regime has actually cracked down, not opened up. Moreover, the president’s theory that more tourism will bring political reform is bizarre. Has it done so in China? In fact, Cuba has long traded freely with every single country in the world except the United States, and has had tens of thousands of tourists from Europe and Canada. Is there something magical about American tourists that will force Fidel and Raul to give up communism?

But the president appears to believe Raul may not really be a communist anyway. “I do see in him a big streak of pragmatism. In that sense, I don’t think he is an ideologue,” Obama told Yahoo. Raul Castro joined the “Socialist Youth,” a pro-Soviet communist group, as a teenager. He was absolutely faithful to the Soviet Union while it existed, and remains absolutely faithful to the Leninist view of politics: dictatorship, repression, prisons, never an election, never free speech or press. This man is “not an ideologue” because he decides to accept American tourist dollars and investments, with all of the money put through regime channels?

It’s laughable, but not to the Cubans who continue to struggle for freedom. Consider this comparison. Natan Sharansky was imprisoned in the Soviet gulag when Ronald Reagan called the Soviet Union an “evil empire. Sharansky has said that

"It was the great brilliant moment when we learned that Ronald Reagan had proclaimed the Soviet Union an Evil Empire before the entire world. There was a long list of all the Western leaders who had lined up to condemn the evil Reagan for daring to call the great Soviet Union an evil empire right next to the front-page story about this dangerous, terrible man who wanted to take the world back to the dark days of the Cold War.

“This was the moment. It was the brightest, most glorious day. Finally a spade had been called a spade. Finally, Orwell’s Newspeak was dead. President Reagan had from that moment made it impossible for anyone in the West to continue closing their eyes to the real nature of the Soviet Union.

“It was one of the most important, freedom-affirming declarations, and we all instantly knew it. For us, that was the moment that really marked the end for them, and the beginning for us. The lie had been exposed and could never, ever be untold now. This was the end of Lenin’s ‘Great October Bolshevik Revolution’ and the beginning of a new revolution, a freedom revolution–Reagan’s Revolution.

“We were all in and out of punishment cells so often—me more than most—that we developed our own tapping language to communicate with each other between the walls. A secret code. We had to develop new communication methods to pass on this great, impossible news."

That was the message Reagan sent to prisoners in the gulag.

Obama’s message to Cuba’s political prisoners: Raul Castro is “not an ideologue.” The Reagan-Obama contrast speaks for itself. An Obama visit to Castro’s communist regime in Cuba will only make this contrast worse.