Did Trump and Moon Attend the Same Summit? 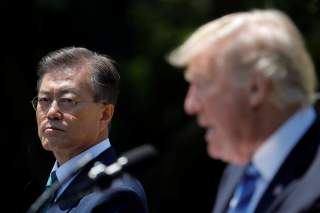 Following Moon Jae-in’s election as South Korean president, most predicted that a summit between the dovish Moon and the hawkish, unpredictable Donald Trump would be a disaster. But, in the run-up to the meeting, both sides took pains to issue reassuring, conciliatory messages. Indeed, both presidents backed away from campaign positions and rhetoric to tee up the summit for success.

The result? The summit went in the right direction and certainly didn’t land in the rough. But Trump’s pugnacious attacks on trade differences and resurrection of campaign vows to increase allied reimbursement for stationing of U.S. forces marred an otherwise pleasant outing. More importantly, while both sides papered over potentially significant differences on North Korean policy, the issue will pose hazards ahead for the bilateral relationship.

Different Tunes from the Same Sheet of Music

The post-summit joint statement presented a united front on policy toward North Korea. President Trump reaffirmed that the United States would defend South Korea against any attack including through the extended deterrence guarantee (also known as the nuclear umbrella).

Both presidents pledged to maintain “lock-step coordination to achieve the complete, verifiable, and irreversible denuclearization of the Korean Peninsula in a peaceful manner.” But while they have pledged to use pressure and engagement, it is clear that each president favors one half of the balance more than the other.

The United States was encouraged that President Moon committed to “fully implement existing sanctions and impose new measures designed to apply maximum diplomatic and economic pressure” on North Korea. Washington also welcomed Seoul’s accession to “the importance of cooperating with the international community to hold [North Korea] accountable for substantial progress on the deplorable human-rights situation in that country.” Previous liberal South Korean presidents had eschewed any criticism of North Korean human-rights atrocities.

For its part, Seoul would embrace that “President Trump supported [South Korea’s] leading role in fostering an environment for peaceful unification of the Korean Peninsula [and] President Moon’s aspiration to restart inter-Korean dialogue on issues, including humanitarian affairs.” However, the two countries will interpret those clauses differently.

Washington will interpret Seoul’s leading role as limited to long-term peaceful unification rather than nuclear and missile threats, while the Moon administration senses U.S. acquiescence to Moon’s broader agenda. Upon his return to Seoul, President Moon declared, “We have secured the United States’ support for us to lead the resolution of the Korean Peninsula problem through dialogue.”

A Moon advisor claimed that the summit dispelled U.S. worries that Moon’s policy would undermine sanctions and “laid the groundwork for Moon to push his North Korea policy with more confidence.” A presidential official commented that the joint statement declared South Korea “will be in the driving seat on the issues concerning the [Korean] peninsula.”

In Moon’s presence, President Trump repeatedly criticized the United States-Korea Free Trade Agreement free-trade agreement and South Korean trade practices. In comments to the media in the Oval Office, Trump spent far more time talking about trade problems with South Korea than the North Korean threat. He said that “we are renegotiating a trade deal right now as we speak with South Korea . . . It’s been a rough deal for the United States . . . we want something that’s going to be good for the American worker.”

In a subsequent meeting in the Cabinet Room, Trump had Secretary of Commerce Wilbur Ross highlight for President Moon specific U.S. trade complaints against South Korea. Trump then declared that “the trade deal is up, and we want to make a deal that’s fair for the United States and fair for South Korea. The fact is that the United States has trade deficits with many, many countries, and we cannot allow that to continue. And we’ll start with South Korea right now.”

Yet again, at the Rose Garden joint-press event, Trump browbeat President Moon on trade in remarks as lengthy as those devoted to the necessity for convergence on North Korea policy. Trump disparaged the trade deal as “not exactly a great deal” but was “encouraged by President Moon’s assurances that he is working to create a level playing field so American workers and businesses and especially automakers have a fair shake.”

President Trump also emphasized that “we are working together to ensure fair burden-sharing in support of the U.S. military presence in South Korea [and] burden-sharing is a very important factor which is becoming more and more prevalent, certainly in this administration.” It was the first time since his inauguration that Trump had publicly raised the issue of South Korea paying more for U.S. troops.

When asked by South Korean reporters, President Moon disputed Trump’s depiction of ongoing talks or plans to renegotiate the free-trade agreement. Moon pointed out that “all you have to do is look at the content of the Joint Statement,” which did not include a reference to renegotiation. “Anything else is outside of what was agreed upon,” he said.

The death of Otto Warmbier has had a galvanizing effect on both President Trump and Congress. The two branches and the two political parties are now united on the necessity to increase pressure on North Korea for its repeated violations of UN resolutions and U.S. law.

Trump declared that U.S. patience with the North Korean regime “is over [for the] brutal regime in North Korea that has no regard for the safety and security of its people and its neighbors.” President Trump’s decision to sanction a Chinese bank for assisting North Korea’s nuclear and missile programs is a welcome and long overdue U.S. action.

For too long, Washington has provided de facto immunity to Chinese entities violating U.S. laws. Hopefully, it is but the tip of the iceberg of further measures to uphold U.S. law and defend the U.S. financial system.

Conversely, President Moon will continue his quest to engage with North Korea to induce Pyongyang to abide by its denuclearization pledges and UN required actions. But North Korea has repeatedly declared it will never give up its nuclear weapons. During my meetings with North Korean officials last month, they emphasized that “denuclearization is totally off the table. There is nothing that Washington or Seoul could offer.” Numerous previous attempts at negotiations and diplomacy have failed.

Pyongyang has also showed that it won’t act any differently toward Moon Jae-in than his conservative predecessors. Since Moon’s inauguration, the regime has launched several missiles and pledged additional nuclear tests as well as the initial test launch of an ICBM that could eventually threaten the U.S. homeland.

While the Trump-Moon summit was far better than initially expected, enduring differences over the conditions for approaching the regime and resolving the North Korean threat could cause future strains in the bilateral relationship.