Do We Need a New New Deal to Deal with the Rise of the Robots? 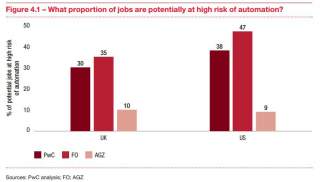 Just how many jobs will the robots take by, say, 2030? The above chart from a new PricewaterhouseCoopers study provides yet another speculative estimate, building off two other models (one by Frey and Osborne at Oxford, the other by Arntz, Gregory and Zierahn for the OECD.)

Those higher-end estimates certainly look disruptive, even a bit scary. And they’re one reason — along with personal experience and observation — why Silicon Valley folks and other technologists were dumbfounded when Treasury Secretary Steven Mnuchin recently hand-waved away automation concerns, calling it a fifty- or 100-year problem.

Yet it’s now almost a cliche when discussing automation to, for instance, write off all those millions of truck driving jobs. An Obama White House study estimated that nearly 3.1 million drivers working today could have their jobs automated by autonomous vehicles, though no timeline was offered.

In a new TechCrunch post, a tech entrepreneur in the call center business offers a similarly gloomy forecast for the more than 3 million people working in that sector: “From our data on large banks, telcos, retailers and so on, we can see that approximately 40-50 percent of tasks performed in customer care fall into a category that is highly susceptible to automation: routine processes like updating payment cards, addresses, passwords and other basic processes.”

Rather than taxing robots or giving everyone a basic income, the author, LivePerson CEO Rob LoCascio, wants a “new New Deal” to deal with automation. He has two suggestions: First, “government should fund education and retraining programs that provide an opportunity for at-risk employees to learn new skills, geared toward those industries that will be around longer-term.” Uncle Sam could also work with business in raising public awareness since his company’s research found that “88 percent of Americans reported not being worried about losing their jobs even after being shown research from Oxford University predicting that 47 percent of U.S. jobs are vulnerable to automation.”

In addition to investing in people, LoCascio thinks government should invest in companies or startups creating platforms that use “human labor to do uniquely human activities” Think Esty, for instance. And anticipating a “government picking winners and losers” sort of objection — I certainly have those concerns — LoCascio adds. “Usually, government investment in tech goes poorly, and inflates bubbles, but in this case, a ‘pre-bubble’ that anticipates the great automation shift would actually soften the landing.” Maybe.

Anyway, I like the first idea better, so let’s focus on that. Indeed, my AEI colleague Michael Strain has written of private-sector designed apprenticeship programs, helped along by government funding (like wage subsidies during training) and labor market deregulation such as making apprentices exempt from minimum wage laws. Strain: “Students benefit because they receive an academic credential; actual, real-world work experience; and a paycheck. . . .  Such programs should be made available to older workers as well, particularly those switching occupations after having been displaced by technology or globalization.”

But back to PwC, which offers a sort-off happy ending that might be easy to miss:

The more significant offsetting factor is that these new automated technologies will boost productivity considerably over time1 (if not, they will not be adopted on economic grounds). This will generate extra incomes, initially for the owners of the intellectual and financial capital behind the new technologies, but feeding into the wider economy as this income is spent or invested in other areas.

This additional demand will generate increased jobs and incomes in sectors that are less automatable, including healthcare and other personal services where robots may not be able to totally replace, as opposed to complement and enhance, workers with the human touch for the foreseeable future. The historical evidence suggests that this will eventually lead to:

• broadly similar overall rates of employment for human workers, although with different distributions across industry sectors and types of jobs than now;

• higher average real income levels across the country as a whole due to higher overall productivity;

• but quite possibly also a more skewed income distribution with a greater proportion going to those with the skills to thrive in an ever more digital economy – this would put a premium not just on education levels when entering the workforce, but also the ability to adapt over time and reskill throughout a working life.