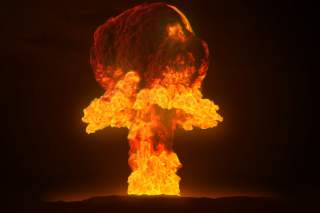 With Russia’s deployment of the new SSC-8 ground-launched cruise missile, the 1987 Intermediate-Range Nuclear Forces Treaty appears to be in its last death-throes. But what should the U.S. do in response to the treaty's demise? One suggestion is to bring back the nuclear version of the Tomahawk sea-launched cruise missile, the Tomahawk Land Attack Missile - Nuclear, or TLAM-N. The last TLAM-N was dismantled in 2013, though U.S. submarines hadn’t patrolled with them since President George H.W. Bush’s 1991 Presidential Nuclear Initiatives.

Much of this thinking has its roots in NATO’s Double Track Decision, which President Reagan’s opted to deploy Gryphon, a ground-launched version of the Tomahawk missile, and Pershing II, an intermediate-range ballistic missile, to Europe. These systems both aimed to enhance NATO’s nuclear warfighting capability while also allowing the United States to induce the Soviet Union to return to the bargaining table and negotiate from a position of relative strength.

Despite the Cold War deja vu, however, the 2010s are not the 1980s. As we attempt to apply any historical case study to a modern problem we would do well to examine what differences exist between the two. And in reviewing the decision to deploy Gryphon and Pershing II we can see that many of the factors behind that decision are simply not applicable in the same ways today and that the costs associated with re-fielding the TLAM-N to Europe exceed any potential benefit.

Throughout the Cold War, the United States and its NATO allies offset Soviet conventional military superiority through the deployment of a vast array of tactical nuclear weapons. These included nuclear warheads in the form of landmines, artillery shells, artillery rockets, and bombs which could be dropped from fighter aircraft. These tactical systems were to ensure that any conventional attack against NATO by the Soviet Union would quickly escalate to a nuclear level, and as such risk the U.S. heavy bomber and missile force launching attacks directly against the Soviet Union itself. This, in turn, was designed to make the potential cost of a conventional attack against NATO unpalatable.

Throughout this period, however, NATO leadership was deeply concerned about ensuring that the United States (and its strategic nuclear forces) remained sufficiently “coupled” to Europe. If the U.S. should become “uncoupled” from Europe, the Soviet Union would be able to engage in a conventional attack safe in the idea that the United States would not risk using nuclear weapons out of fear of a reciprocal attack against the U.S. mainland. To compensate against this, the U.S. maintained longer-range theater nuclear systems to prevent this decoupling, starting with the Thor and Jupiter missiles.

In the wake of the Cuban Missile Crisis, the United States withdrew its Jupiter intermediate-range ballistic missiles (IRBMs) from Europe in exchange for a Soviet withdrawal of its IRBMs from Cuba. The Soviet Union, however, maintained a large force of IRBMs inside of Soviet territory, which could target the majority of Europe. These IRBMs could be used to target key NATO targets, including NATO nuclear forces, stationed in Europe, leaving NATO unable to retaliate in kind without having to make use of strategic nuclear forces.

In response, the United States deployed both F-111 bombers and additional submarines armed with Polaris ballistic missiles to Europe and placed them directly under the command of the Supreme Allied Commander Europe. These systems were intended to counter Soviet IRBMs, essentially restoring the strategic balance in Europe. However, at the end of the 1970s, the Soviet Union began to field the SS-20 road-mobile ICBM. In addition to being a vast improvement in accuracy compared to the older IRBM systems, they were road-mobile and thus less vulnerable to NATO attack.

Today, however, there is a different dynamic between NATO and Russia. During the Cold War the entire point of coupling was to ensure that the Soviet Union wouldn’t be tempted to destroy NATO’s nuclear weapons stocks in an early attack out of the belief that the United States wouldn’t make use of its strategic nuclear systems. If this happened, NATO would have lost its tactical nuclear weapons, and thus the only tools it had available to stop the Warsaw Pact’s vast conventional force.

But tactical nuclear weapons aren’t the only thing standing between NATO and conventional defeat. Today, NATO, and especially the United States, has a large conventional edge on the Russian military and would be able to inflict significant amounts of damage against the Russian state in the event of conflict. Conventional attack is no less capable of inflicting sufficient damage to deter attack. Nuclear weapons aren’t magic. As political scientist Robert Mueller observes, “It is probably quite a bit more terrifying to think about a jump from the 50th floor than about a jump from the 5th floor, but anyone who finds life even minimally satisfying is unlikely to do either.”

One key reason the U.S. had to introduce nuclear GLCMs in the 1980s, besides a desire for nuclear strike assets that were more survivable than aircraft, was to compensate for the decision to dual-hat other assets. Now, decades later, advocates of the TLAM-N would have us repeat the same mistake.

Upon the withdrawal of Jupiter IRBMs from Europe in the wake of the Cuban Missile Crisis, NATO leadership was concerned that Soviet theater-level targets were no longer sufficiently threatened. As such, the U.S. assigned F-111 dual-capable fighter-bombers and Polaris-equipped ballistic missile submarines to Supreme Allied Commander Europe (SACEUR) to perform theater-level nuclear strikes. That said, though the F-111 was dual-capable (able to transition from nuclear to non-nuclear missions relatively quickly), squadrons during wartime would still be required to maintain aircraft on alert ready to deliver nuclear weapons when needed. The reason for this was twofold.

First, dual-capable aircraft performing conventional bombing missions would be exposed to normal battlefield attrition. Consequently, if you don’t maintain a baseline force on the ground that doesn’t participate in those missions, you run the risk of having insufficient aircraft available to perform the nuclear strikes desired by decision makers. Deciding to execute a nuclear strike, then discovering that you had no aircraft left to carry it out, was understandably seen as unacceptable.

Second, the decision to release and target nuclear weapons is a lengthy one, especially inside NATO’s highly convoluted nuclear approval chain. When combined with the often fleeting nature of nuclear targets (like mobile launchers), the time it would take to retask an aircraft from conventional mission planning and reassign it to a nuclear one meant the difference between a nuclear mission being carried out on time, and a nuclear mission being carried out late. That had grave consequences for not only escalation (where striking at the right time with the right weapon was crucial) but for efficient targeting  (a delay might mean that you miss a fleeting target).

One of the rationales for the Gryphon, therefore, was the freeing up of dual-capable aircraft. With Gryphon launchers that were purely focused on the nuclear mission, then dual-capable aircraft could be taken off quick-reaction alert and assigned back to conventional bombing missions in support of ground forces.  NATO could both maintain a nuclear force that was ready should decision makers opt to use it, but also ensure that it was providing the maximum possible support to conventional air-to-ground bombing.

Today, returning the TLAM-N to Europe, however, would likely be subject to the same constraints as NATO faced with the F-111 in the 1980s. If the submarines equipped with the TLAM-N are allowed to perform conventional warfighting missions, then you risk them being exposed to normal battlefield attrition. It's hard to see combat in the Baltic Sea, Barents Sea, or elsewhere not subjecting the submarine force to combat losses. This is particularly the case if those submarines are launching conventional cruise missile strikes, thus potentially compromising their position. The alternative, then, is to dedicate one or more submarines to a reserve force, carrying the TLAM-N and remaining concealed until such a time as it is needed, depriving theater commanders of a combatant that could be performing any number of different missions.

The Double Track Decision, as history shows, was a controversial one. Sensitive to any perception that the United States may be pushing NATO to prepare to fight a nuclear conflict with the Soviet Union, one that would take place largely on European soil, European publics exploded in opposition to the deployment, with thousands taking to the streets in protest across West Germany and elsewhere.  Indeed, to overcome much of these concerns, NATO had to agree to withdraw 1,000 nuclear warheads immediately, with the warheads supporting the Pershing IIs and Gryphons being introduced on a one-for-one basis with the remaining warheads. Consider then that this was at a time when the perceived threat from Russian nuclear weapons was far higher than it is today, which sees over 85% of Germans opposed to the presence of any weapons on German soil.