Does ASEAN Really Matter to America? 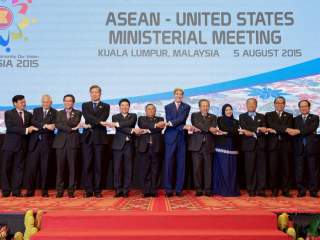 OK, OK, I get the symbolism, but it is a measure of how devalued the language of diplomacy can be that U.S. President Barack Obama would hold an unprecedented summit at Sunnylands in California with ten heads of state whose countries comprise the Association of Southeast Asian Nations (ASEAN) to talk of a “strategic partnership.”

The February 15-16 meeting is intended to underscore the U.S. “rebalance” toward Asia, but it is more political theater than strategy. Yes, the nations of ASEAN total 625 million people. They also make up an economy of $2.4 trillion and individually are important economic partners of the United States with a combined bilateral trade of $260 billion and a similar level of U.S. FDI in all ASEAN countries in 2015.

With regard to defense, longtime U.S. allies like the Philippines and Thailand, and burgeoning security partners such as Singapore, Malaysia, Vietnam and Indonesia—all alarmed at China’s assertive behavior—are important actors helping to undergird the regional security architecture built from the core of forward-deployed U.S. forces and alliances. But in defense, too, most serious business is done with the United States bilaterally.

Obama is to be commended for his initiative to elevate Southeast Asia and showcase the importance of the region to U.S. interests. If he uses the summit to highlight the Trans-Pacific Partnership (TPP) agreement; economic and defense cooperation; and ASEAN support for an open, rules-based order, it may be worth the effort.

But it is delusional to portray ASEAN as a viable collective actor that has more than a marginal role in the regional political/security order. Of course, leaders talking is better than not talking. But after two decades of such multilateralism, regional security is more at risk than ever. Ask the question: If ARF (ASEAN Regional Forum) and EAS (East Asia Summit) and other such acronyms disappeared tomorrow would Asia be any less secure? The answer is no.

Indeed, viewing ASEAN as more than a loose coalition of disparate nations, economies and cultures is to buy into its own fantasyland narcissism. ASEAN nations range from Singapore, a Los Angeles-like dynamic city-state with a GDP per capita at U.S. levels, to small, backward communist dictatorships like Cambodia and Laos, to democracies like Indonesia and the Philippines. Culturally, they range from Muslim-majority states such as Indonesia (the world’s largest Muslim nation) and Malaysia to Buddhist secular states such as Thailand. Only in geographic proximity does a concept of community seem plausible.

Economically, the integration of ASEAN nations has been shaped mainly by their role in global supply chains, first in the 1980s by Japanese auto companies, and since then by electronic assembly and textiles. Intra-ASEAN trade makes up only 30 percent of the bloc’s total trade, while intra-Asian trade is 53 percent. Thus, it is no surprise that some ASEAN states—Singapore, Malaysia, Vietnam—joined the TPP individually.

The ASEAN nations declared themselves the ASEAN Economic Community (AEC) as of January 1. While ASEAN has eliminated 95 percent of tariffs on its trade, the elements of its purported community are supposed to include harmonized regulations, free movement of labor, and a unified market for goods and services. These elements are non-existent and will continue to be for years to come.

The gap between aspiration and reality is the most prominent feature of ASEAN. In nearly fifty years of its existence, ASEAN’s biggest achievement is avoiding war and a vague sense of collective identity. ASEAN has a tiny secretariat with a $17 million budget. If you apply Henry Kissinger’s famous question about Europe to ASEAN: when I need to call ASEAN, whom do I ask for, the answer is nobody.

In every crisis since the Vietnam War—the East Timor conflict, the tsunamis in Indonesia, cyclones in Burma, territorial issues in the South China Sea—when Asia dials 911, it is the United States (and occasionally Australia) that answers. One huge obstacle ASEAN seems unable to overcome is that it operates by consensus with an ethos of non-interference in member states’ internal affairs. This “ASEAN Way” is a dead end, making collective action near impossible. Cambodia and Laos are beholden to China and will not approve any action on an issue important to Beijing.

There is a basic divide between mainland Asian nations like Thailand and Malaysia and maritime Asia (Indonesia, Philippines, Vietnam). Chinese assertiveness in South China Sea territorial disputes is in conflict with claims by Malaysia, Indonesia, Vietnam and the Philippines. Yet, in one recent meeting, ASEAN failed to approve a statement aimed at altering Chinese actions.

Indonesia, with 250 million people, is the natural leader of Southeast Asia, but its inward-looking government lacks dynamic statesmen with the stature to lead.

One simple step would dramatically improve ASEAN functionality and relevance as a regional organization: majority vote decision-making. But it has refused to take such a recommendation from its own appointed Wise Man’s Commission.

So why does the Obama administration in communiques say it is “dedicated to ASEAN centrality” in Asia? After all, the Asia-Pacific economy, military spending, nuclear weapons and potential conflicts are all concentrated in Northeast Asia. The answer is a case of bad habits and the emperor’s new clothes. Since the end of the Cold War, ASEAN, fearful of a U.S. retreat from the region, proposed regional meetings like the ARF that have become institutionalized as bureaucratic ritual. Ministers and heads of state meet, wear traditional shirts, play golf, make declarations and go home.

No one wants to rock the boat and point out that this is a largely hollow exercise. TPP and U.S. alliances, credible military presence, proactive diplomacy, and bilateral defense partnerships are what matter to the U.S. position in the Asia-Pacific. The beginning of serious multilateralism is when we admit that the emperor has no clothes. If everyone is a strategic partner, then nobody is a strategic partner.

Robert A. Manning is a Resident Senior Fellow in the Atlantic Council’s Brent Scowcroft Center on International Security. This article first appeared in the New Atlanticist.