Does Boeing Have a Plan to Replace the Joint Surveillance and Target Attack Radar System (JSTARS)? 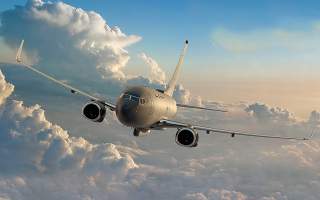 Boeing believes that its 737-based proposal to replace the U.S. Air Force’s aging Northrop Grumman E-8 Joint Surveillance Target Attack Radar System will not only perform better but will be cheaper than rival machines. The reason is that the aircraft is larger and more power—but at the same time—is built on a high production volume airliner platform.

“We have taken again a different approach on that when we were using a 737 based platform,” Boeing chief executive officer Dennis Muilenburg said at the Sanford C. Bernstein’s Strategic Decision Brokers Conference on June 1.

“We believe that provides the size, weight, power, cooling growth that our customers will need for the future.”

Space, weight and power availability are especially important for intelligence, surveillance and reconnaissance aircraft because new sensors and computing hardware are inevitably added over time.

“These surveillance airplanes, the situation awareness assets tend to have mission growth over time as the mission get tougher and tougher. So we are presenting an option to our customers there that provides growth capacity for the future,” Muilenburg said.

Those advantages include greater capacity and the ability to leverage Boeing’s 737 production line.

“The mission capacity and having the crews on board, obviously the footprint advantage, but even in that bigger airplane an operating cost advantage because by leveraging the 737 and the commercial infrastructure around the world, you get a bigger airplane with more capability for less operating cost.” Muilenburg said. “And that's a fundamental advantage of our One Boeing approach and again that's the offer we put forward and we are looking forward to supporting our customers there.”

There is precedent for building a surveillance aircraft based on the 737. Both the Australian E-7A Wedgetail and the U.S. Navy’s P-8A Poseidon are based on the venerable airliner. Indeed, many of the capabilities that would be needed for a JSTARS replacement have already been developed for the P-8.