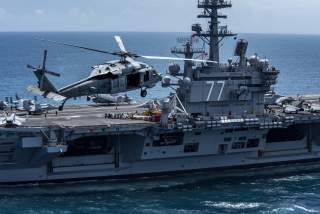 Shortly after China’s first homemade aircraft carrier set off for sea trials on its maiden voyage this week, the Chinese media starting making waves, saying the country’s navy needed four more such vessels to advance the country’s interests in the western Pacific and northern Indian oceans.

Some Chinese papers said the People’s Liberation Army needs a total of six carriers to form convoys and strike groups to project and advance China’s interests in the western Pacific and northern Indian oceans.

Senior Colonel Zhang Ye, a research fellow with the PLA Naval Research Institute, told the People’s Daily that the new carrier, which is due to be delivered to the navy by the end of the year and commissioned within two years, could ply routes in the western Pacific and northern Indian Ocean to safeguard China’s interests in the geopolitical and maritime stakes.

The northern Indian Ocean is a crucial conduit for China’s energy supply and trade flow and there are security concerns in the South China Sea. Six carriers could give China the leverage to maneuver in a worst-case scenario if it had to deal with emergencies on several fronts, said Zhang.

Within the next decade China may build a third carrier – there have been rumors about its specifications and the site of its construction for some time – enabling an optimal lineup of seagoing bases: one on war-ready standby and patrol, one for training while the other undergoes maintenance.

But the irony is that state media has also been told to make light of the PLA naval prowess. While touting the host of cutting-edge technologies on the new indigenous carrier in typical party agitprop, reports appearing in Chinese newspapers have also followed the official line that Beijing has no intention of entering a “carrier arms race” with the US. The official line is its carriers are for defense purposes only.

“China doesn’t have to throw around its naval weight like the US does, we don’t need to wage a war in far-flung littoral waters on the other side of the world and thus we don’t need so many carriers as far as our ability goes, and we have no intention to police the world,” the Global Times quoted a retired naval admiral as saying.

This is indeed Beijing’s admission of the obvious mismatch between the two navies: the US has 11 nuclear carriers in active service with the 100,000-ton Gerald G Ford supercarrier in sea trials as well.

Hu Bo, of Peking University’s Institute of Ocean Research, also told the paper that the yawning mismatch was not merely in size, as the US Navy’s fleet of carrier-based fixed-wing early warning aircraft was another formidable edge.

Early warning aircraft are indispensable for a carrier strike group to execute high-intensity air operations on the high seas.

Similar early warning helicopters on board the Liaoning, the solo Chinese carrier now in service, are held back by low flight altitude and short detection range since the Soviet-built carrier’s antiquated ski-jump ramp, which is also copied on the homemade vessel, is incapable of catapulting large fixed-wing aircraft as they are significantly heavier.