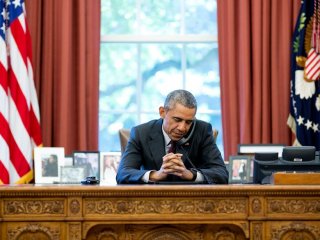 When President Obama turned to foreign policy in his final State of the Union speech, he used a phrase that seems to come from a maths textbook. Here's the relevant passage, with emphasis added:

“No nation attacks us directly or our allies because they know that’s the path to ruin. Surveys show our standing around the world is higher than when I was elected to this office, and when it comes to every important international issue, people of the world do not look to Beijing or Moscow to lead. They call us.

“So I think it’s useful to level set here, because when we don’t, we don’t make good decisions. Now, as someone who begins every day with an intelligence briefing, I know this is a dangerous time. But that’s not primarily because of some looming superpower out there, and it’s certainly not because of diminished American strength.

“In today’s world, we’re threatened less by evil empires and more by failing states. The Middle East is going through a transformation that will play out for a generation, rooted in conflicts that date back millennia. Economic headwinds are blowing in from a Chinese economy that is in significant transition. Even as their economy severely contracts, Russia is pouring resources in to prop up Ukraine and Syria, client states that they saw slipping away from their orbit. And the international system we built after World War II is now struggling to keep pace with this new reality.

“It’s up to us to help, the United States of America, to help remake that system. And to do that well, it means that we’ve got to set priorities. Priority number one is protecting the American people and going after terrorist networks.”

'Level set' is clearly analogous to 'calibrate' here. And Obama is right: when you overestimate the threat, you make bad decisions (like the Iraq invasion). So, Obama's ongoing effort to give Americans a less apocalyptic assessment of the terrorist threat is to be applauded. If Americans have a more realistic view of terrorism, they are less likely to support military adventures that end in disaster for their country.

But note that Obama is walking a fine line here. Over the course of his term he has nudged America away from the Bush-era language of 'existential threats', but he can't get out too far ahead of the country, and he can't be seen to dismiss the threat, since that would look very bad for him if a major ISIS or al Qaeda attack happened right after. So he still refers to terrorism as America's number one priority.

From a Pacific perspective, it's also interesting that Obama's “level set” includes, as one of its reference points, a “looming superpower.”

You could read this passage narrowly—Obama is making the obvious point that ISIS is no superpower—but a broader reading is that Obama is not concerned about the rise of a rival power. That can only be a reference to China or Russia, since in the next paragraph he downplays both countries' prospects by referring to their economic woes. Then Obama makes the curious claim that the main reason the post-World War II order is “struggling to keep pace” is Russia's interventions in the Ukraine and Syria.

It's hard to dispute the claim that Russia is past it as a superpower—even Putin dismisses the label—but China cannot be dismissed so easily. So when you add this kind of rhetoric to Obama's repeated assurances of America's military lead over international rivals ('It's not even close!'), he does create the impression that he isn't taking the rise of China particularly seriously. Yet when it comes to economic power, ultimately the most important measure of national power, China is already streets ahead of the last “looming superpower” the United States faced down, the Soviet Union.

Of course, China is not the new Soviet Union. But China's relationship with the United States is marked by rivalry as well as cooperation, and that is only likely to grow as China grows in stature and its interests expand. If any country is going to fundamentally challenge the international system built by the United States after World War II, it will be China, not Russia.

Obama has done America and the world a service in recalibrating the terrorist threat, but in this speech at least, he seems to have lumped China into his argument about exaggerated threats. If Obama 'sets his levels' too low, he and his country might one day get a nasty shock.

Sam Roggeveen is the editor of the Interpreter, where this article first appeared.