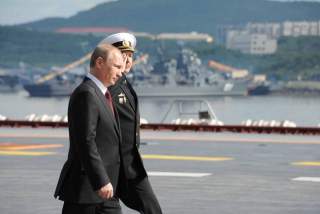 What are Vladimir Putin’s intentions towards Ukraine?  Is the Russian leader bent on annexing eastern portions of the country, or are his ambitions much more limited than his most ardent critics—including hawks in Washington—would suggest?  More to the point, how should leaders in western capitals respond to what they believe is being planned in Moscow?

There are those who believe that Putin’s goals in Eastern Europe are relatively circumscribed.  Harvard’s Stephen Walt, for example, recently posted on Twitter to ask whether there was any “hard evidence” that Putin wants anything more than to prevent Ukraine from drifting (further) into the orbit of the west.  Although posed as a “serious question,” Walt’s subsequent tweets seem to clarify that his true intention was to cast doubt upon the notion that Moscow is acting upon expansive revisionist designs.  “Don’t believe the hawks,” Walt was essentially saying.

Walt, of course, is a defensive realist.  His theory of international politics holds that states tend to want to preserve a balance of power between themselves and their adversaries.  As such, leaders usually keep a lid on the extent of their geopolitical ambition.  To do otherwise would be to risk incurring the negative repercussions of strategic overreach.  For Walt and others of his genre, offense is not always the best form of defense in the long run.

Like any good theory, Walt’s brand of realism makes some valuable contributions to our understanding of world politics—cautioning against exaggerating the threat posed by Russia and implying a set of policies that might be implemented to manage the geopolitical fallout of Putin’s meddling (as well highlighting the policies that ought to be avoided).  Yet no analytic perspective is without its costs; each obscures certain facets of reality even as it usefully brings others into sharp focus.

The drawback of presuming until proven otherwise that Putin harbors limited ambitions towards Ukraine is that such a presumption risks over-estimating the importance of leaders’ long-term intentions.  Even the best laid schemes in world politics rarely pan out as intended.  Events, both domestic and international, intervene to throw diplomacy into disarray and to present leaders with opportunity structures that they are ill prepared to navigate.  This inherent unpredictability of international relations has been markedly evident in Putin’s recent foreign policy moves.

Indeed, if Putin’s long-term intentions truly translated into foreign policy outcomes via anything even approximating a perfect conveyor belt then the current crisis in Ukraine would never even have materialized; Kiev never would have been allowed to entertain closer relations with the EU and NATO in the first place because Russia would years ago have nipped the attempted realignment in the bud.  Nor does it appear credible that Putin nurtured plans to annex Crimea before the opportunity presented itself in February-March of this year; that he ultimately decided to do so is not so much evidence of Putin’s long-term calculations as it is of ruthless pragmatism on his part.  In short, Putin is responding to events as well as playing a decisive role in shaping them.

While Walt and others may be right that Putin currently has no particular design on eastern Ukraine, then, it is important to recognize the limits of such a presumption.  If the present crisis has demonstrated anything about what drives foreign policy, it has shown that leaders respond to short-term factors and exigencies as much as (if not more than) they adhere to long-term strategic plans.  Like any self-interested political leader, Putin can be expected to devour low-hanging fruit and exploit opportunities as they present themselves, even if for no other reason than to improve his bargaining position vis-à-vis his detractors on the world stage.  It would thus be wrong to assume that Crimea was a one-off.

Putin’s intentions towards Ukraine are not fixed.  Politics, after all, is the art of the possible.  As the realm of possibility facing Putin expands and contracts, so too will his political ambition wax and wane.  The challenge for western leaders is to influence, even if not entirely manage, the extent of that ambition—not merely to gain an estimation of it.