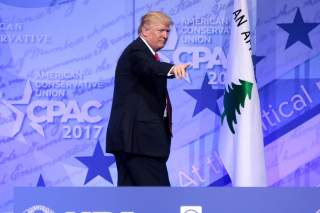 In his own way, Trump may be fulfilling the long held ambition of George Kennan on the world order. And while the transition is risky, it may ultimately be for the best. To see why, we need to realise just how different US policy is today compared with the vision of the man credited with its post-war creation.

In early 1949, while the Berlin blockade raged, there was a major debate, deep within the US government, between Kennan, then Director of Policy Planning, and Secretary of State Dean Acheson. Both were committed to rejecting Soviet assertiveness in Europe and deeply worried about the weakness of their European allies and partners. Kennan wanted a patient but limited strategy that would shake the region out of its dependence upon the US. Acheson worried that unless America’s military commitment was unshakable Western Europe couldn’t resist the Soviets. Acheson won the argument and ‘Containment’ became a doctrine of expanded US presence and support across the globe.

Since then, every US president has followed Acheson’s proposal. History has shown the wisdom of that approach for much of this period. Yet, just as Kennan predicted, US allies also took the opportunity to largely ‘cheap ride’ on an America which didn’t like having to pay the bill.

Almost every US president has sought, asked and begged US allies to spend more on their own defence. In his pivot and West Point speeches, former President Barack Obama repeatedly asked allies and others to do more to help the US. That’s the essence of his infamous ‘lead from behind’ motif.

Obama’s requests, like those of virtually every president before him, were largely ignored by the allies. Indeed, many took the occasion to cast such requests for help as evidence of American weakness which indicated a lack of resolve on Washington’s part. Like his predecessors, Obama grumbled about that response and then continued to implemented policies—the rebalance to Asia and action against ISIS—which forced the US to absorb most of the cost and risks.

Rhetorically, Trump follows in that tradition. His language is cruder, but hardly different from either Bernie Sanders or the wishes of Obama, Bill Clinton and Ronald Reagan for more allied spending and support. It’s his actions that differ from the others.

Trump is America’s best hope for scaring Europe and Asia to change. It may even be working. As German Chancellor Angela Merkel recently remarked: ‘We Europeans must really take our destiny into our own hands… the times in which we can fully count on others are somewhat over, as I have experienced in the past few days’.

Fear has worked before for US leaders. Richard Nixon’s remarks from the island of Guam in 1969, playing down US commitment to regional security, set off a series of tremors across Asian capitals. In Australia, that shock played a major role in our adoption of the Defence of Australia construct, which, despite some shortfalls, has created Australia’s modern and capable armed forces.

As Kennan realised in 1949, a little fear can sometimes be a very useful thing. In his vision, the US wasn’t an imperialist power seeking global reach for its ego’s sake. Rather, it would help shoulder the burden to get its friends back on their feet, but only for a limited time and only because doing so would benefit everyone, including America.

Yet despite decades of discussion about the end of the US-led order, and increasingly clear signs from the US public and political class that they neither wanted nor could sustain another century of leadership, very few hands have reached out to help. And so Washington has lumbered on alone, exposed on the battlefield and in debt at home.

In the 1940s, Acheson won the argument because US allies were weak and the threat imminent and strong. But that isn’t the world of the 21st century. Russia, China and international terrorism all pose serious challenges but they aren’t equivalent to the threat of the USSR and communism in the 1940s and there are dozens of rich and capable US allies and partners who can and should do more to help.

A strong US presence on behalf of the democratic, liberal states of the world is vital. But as Kennan argued, there are other ways for that to occur beyond what we’re used to. Trump is no Kennan. But if he helps shock the development, materially and intellectually, of other ways of protecting free and liberal states, then he may do us all some good.

The new order won’t look like the one Acheson helped build. It won’t be ruled by the friends of democracy. Yet as Kennan argued, that doesn’t mean it will inevitably be ruled by the enemies of democracy either. Working out how that middle ground might operate, and how Australia can make its way in that world is the challenge of our times.