Donald Trump Just Made a Big Decision Regarding U.S. Policy Towards Afghanistan 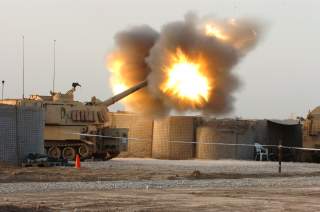 Defense Secretary Jim Mattis is promising that the United States will defeat the Taliban and other terrorist organizations in Afghanistan.

The move comes a day after President Donald Trump delegated authority to the Pentagon to set troop levels in that war-torn nation as it sees fit to achieve America’s military objectives.

“Yesterday afternoon, the President directed the Department of Defense to set troop levels in Afghanistan,” Mattis said in a statement issued June 14.

“This will enable our military to have greater agility to conduct operations, recognizing our military posture there is part of a broader regional context.”

In his statement, Mattis said that the United States cannot repeat the mistakes of the past and allow Afghanistan to slip into chaos—thereby becoming a haven for terrorists to launch attacks on the American homeland or those of allied nations.

“This administration will not repeat the mistakes of the past,” Mattis said.  “We cannot allow Afghanistan to once again become a launching point for attacks on our homeland or on our allies.”

As the defense secretary noted, the United States has not faced a terrorist attack of the scale of September 11, 2001, since that day. But that does not mean that Washington can let its guard down.

“The danger continues to evolve and that danger requires a commitment to defeat terrorist organizations that threaten the United States, other nations and the people of Afghanistan,” Mattis said.

“For example, ISIS has established a branch in Khorasan Province, al-Qaeda and other terrorist groups remain active inside Afghanistan, and the Taliban continue to pose a challenge to the democratically elected government.”

The United States is making progress in defeating the insurgents in Afghanistan, according to Mattis. Though exactly how much progress is debatable. In February, Gen. John Nicholson—commander of U.S. forces in Afghanistan—told the Senate Armed Services Committee that the situation in that country could be described as a “stalemate.” Mattis, however, sees progress being made.

“We are making progress in degrading these groups, but their defeat will come about only by giving our men and women on the ground the support and the authorities they need to win,” Mattis said.

Simply delegating authority to the Pentagon to control the number of troops on the ground does not necessarily change the number of service personnel in Afghanistan. However, the Pentagon will now have greater freedom of action to defeat the enemy as it sees fit—such calling in airstrikes as needed and with more flexibility than before. The Obama White House, by contrast, took a much more hands-on approach where the National Security Council would often be directly involved in operational matters.

“The delegation of this authority does not in itself change the force levels for Afghanistan.  Rather, it ensures the Department of Defense can facilitate our missions and align our commitment to the rapidly evolving security situation, giving our troops greater latitude to provide air power and other vital support,” Mattis said.

“Our core mission will remain the same: to train, advise and assist Afghan forces. We are there to help defeat a common enemy and ensure Afghan forces can safeguard the future of their country.”

According to Mattis, the delegation of authority to the Pentagon is part of larger American strategy to defeat extremist groups around the world.

“This decision is part of a broader strategy we are developing that addresses our role in Afghanistan and beyond. We will present this to the President in the coming weeks.  We will continue to work with our allies and we will ask more of them,” Mattis said.

“Working with the Afghan government and our allies and partners, we will achieve victory against the terrorists abroad, protect our borders at home, and keep America safe.”

The United States could deploy between 2000 and 4000 more troops to Afghanistan in addition to the roughly 8,400 personnel that are already in country. Mattis has not said when he might deploy those additional forces.